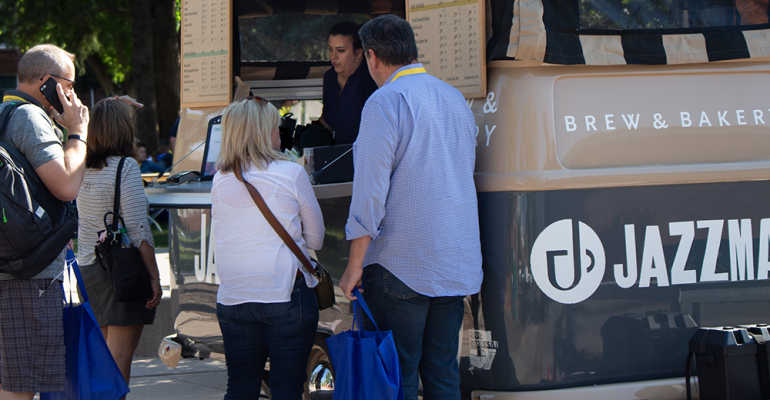 Jazzman’s Café is a brand developed by Sodexo well over a decade ago and has since seen many extensions, from drive-throughs and mobile app ordering to online retailing.

Now, a mobile cart version has made its debut at Northern Arizona University (NAU), which has been a hotbed for creative concept ideas for years. The cart, which uses a Dub Box platform, “basically mirrors the Jazzman’s coffee café that we have in our business school, with all the blended and hot drinks and pastries,” says Ben Hartley, director of campus dining at NAU. “We also added nitro cold brew, which we don’t have in our café, and it allows us to take coffee to places where we have some concentrations of population, but where we don’t have an offer.”

Originally, the department explored a mobile Starbucks platform, but when that idea fell through, “we reached out to our folks at Jazzman’s and they said, ‘Yeah, it sounds like a great idea,’” Hartley says. 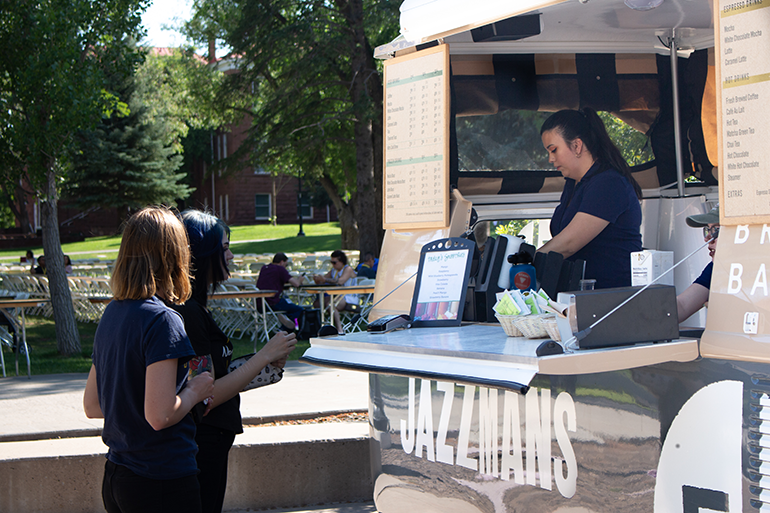 The cart, which debuted after spring break this year, continues to operate over the summer.

“We have 13 orientation sessions for new students [over the summer] with over a thousand people at a time, so the cart goes to the orientations so parents and prospective students can go buy some coffee if they like,” Hartley explains.

Because it requires a 220V power source, placement is restricted. Over the spring semester, it only operated from 7 a.m. to 1 p.m., doing 200-300 transactions on a typical day. For the fall, plans call for the unit to sit in the Central Quad of campus, where it is surrounded by several residence halls, during the morning, and then relocate to a bus stop across from the campus bookstore later in the day. Projected operating hours are from 7 a.m. to 7 p.m.

“We figure we can capture the morning traffic of the students leaving the residence halls and heading to class,” Hartley explains, “and then, as the afternoon progresses, we’ll be able to pick up the business at the bus location.”

The cart also makes appearances at campus events held by student groups like the Student Government and Res Life.

“When they do programming, they ask for the cart and we take it over there,” Hartley says. “It adds a dimension to their programming that we didn’t have the ability to do before.”

Aside from the coffee drinks, the cart sells typical breakfast fare like muffins, Danish, coffee cakes and scones in the morning, then sweets like cookies and brownies later in the day. The Jazzman’s brand isn’t designed to be a dining station, so the cart doesn’t offer meal options such as sandwiches or salads, though it does have smoothies and blended ice drinks, making it an attractive refreshment stop.

“It really gives us the ability to take coffee around campus,” Hartley summarizes.