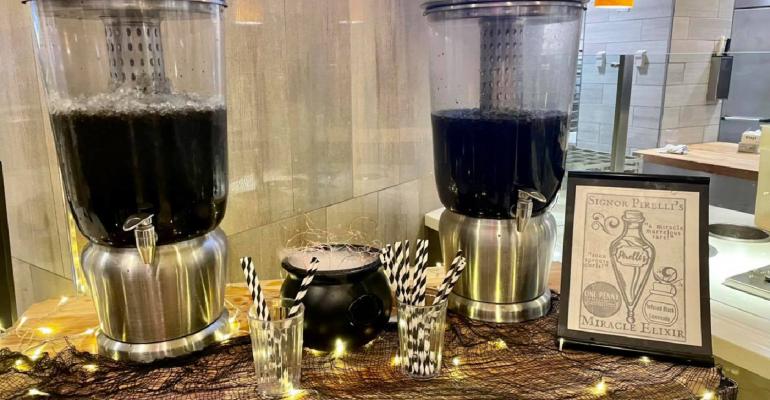 Spoiler alert: The character Mrs. Lovett in the musical Sweeney Todd has a terrible secret she bakes into pies. We won’t say more, but the idea of a Sweeney Todd-themed food event is quite attention grabbing!

At three Boston University dining halls, a Sweeney Todd-themed event was a cool collab between the Aramark dining services team and BU on Broadway, a musical theater organization on campus. To promote the group’s upcoming performance of “Sweeney Todd: The Demon Barber of Fleet Street,” the night featured thrilling treats and beverages inspired by the musical and also some traditional London pub favorites to promote BU on Broadway’s upcoming show.

Related: Viewpoint: Serving up the Future of Intelligent Automation at College Dining Halls

Director of Residential Operations Leigh Thumith says the partnership started in 2019, when dining services created a menu to help promote BU on Broadway’s production of Into the Woods. “When they reached out to us this year about Sweeney Todd, we couldn’t wait to create a fun menu to promote their production and support the cast and crew.”

Creativity came easily, says Thumith: “With Sweeney Todd, there’s so much to work with!” Check out the fun items the team came up with. One more spoiler alert/plot twist: There is a vegan version of the meat pie!