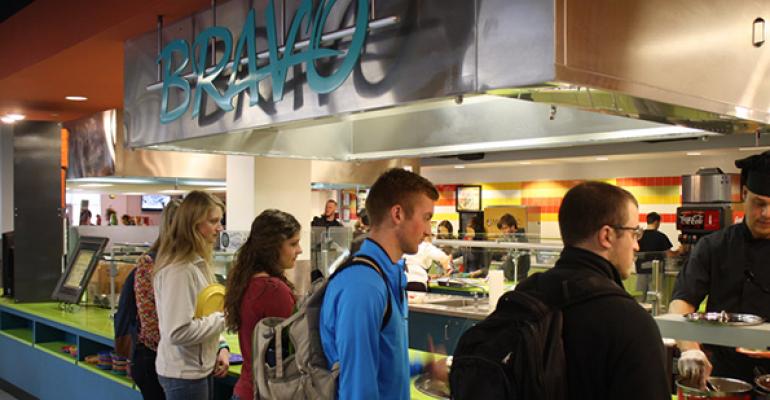 The cafeteria is a research lab at Lebanon Valley College

Students and a philosophy teacher use the college’s dining program to conduct studies and help drive sustainability changes.

Students dining at Lebanon Valley College cafeteria in Harrisburg, Pa., can order a farro salad or an authentic Northern Italian meal thanks to students’ philosophy research. Yes, you read that right: Philosophy is taking a role in the dining program.

“Food is a really good vehicle for teaching difficult concepts,” says Robert Valgenti, the philosophy teacher who runs the e.a.t. (engage, analyze, transform) program, where students perform quantitative and qualitative research to improve the dining experience and decrease boundaries between the dining and academic spaces on camp. This philosophy-based program is being wholeheartedly embraced by the university’s management company, Metz Culinary Management.

When he started e.a.t. in 2013, Valgenti asked, “Can we get students to develop research projects that will hit upon either the goals of sustainability, nutrition, food ethics or intercultural awareness?” He’s discovered the answer was a resounding yes.

One of the first student projects was a sustainability initiative aimed at reducing plate waste. The cafeteria was already trayless, which has been shown to decrease wasted food, so “we started introducing different interventions. Some of them were knowledge based like posters or displays on where their wasted food goes,” Valgenti says. “We tried to incentivize students, with sample-size portions, so they knew if they liked new foods [before putting them on their plates]." Edible food waste was reduced by 19 percent per person.

They also introduced the Clean Plate Club, and today a Metz employee inspects students’ plates and offers rewards for those who regularly finish their whole meal. “That has significantly cut down on post-consumer waste because people aren’t taking more than they can eat,” says Kim Smith, general manager for Metz Culinary Management at Lebanon, where she oversees about 2,300 meals per day. The Clean Plate Club “was born out of the e.a.t. program. And we still do it. Even though that student has graduated and has gone on to greater things, we still keep that program going because it really has impacted our financials in a very positive way.”

The school’s Taste Lab was also developed through a student’s research project. At the Taste Lab students sample and vote on new dishes being tested by Metz chefs, including healthier and tastier options of foods currently served in the dining hall. Metz has introduced dishes to the cafeteria menu that have been a hit with students at the lab.

Valgenti admits when he tells teachers and administrators at other schools about his partnership with Metz they are “incredulous and surprised.” Metz opened its kitchen and books to Valgenti and his students, which Valgenti has learned is unusual for college dining programs to do.

“They give us recipes, nutritional information, their production sheets, everything,” Valgenti says. “They’re completely transparent in the way they operate. The research we’re doing would be impossible without that. And a lot of companies aren’t comfortable sharing that kind of information.”

As e.a.t. has matured, Metz has become more involved. For the first few years, the program was sponsored by grants, but “Metz has been so impressed by results that they’re funding it fully” starting with the upcoming school year, Valgenti says.

Today “when we develop projects we meet with Metz on a very regular basis,” Valgenti says. “At the end of this year we sat down with my new students, and we said, ‘OK Metz, what are your corporate goals here? What are the kind of things that you’d like to do?’ We try to put together projects that will both be in the students' interest and skill areas, and also be helpful to Metz in some way.”

One upcoming project will try to inform students about all of the healthy, sustainable food the cafeteria is serving. Valgenti’s student found that although Metz makes about 85 percent of its food in house and follows many sustainable practices, “students were generally unaware,” he says.

As part of a student’s research project, freshmen will get an hour and a half orientation on Metz’s culinary program. Students will meet with Metz staff, get an introduction to the Taste Lab, tour the dining hall and learn about different stations and get acquainted with Metz’s sustainability projects. Metz hopes the orientation will give students a better understanding of the cafeteria.

“We have all of these great sustainability initiatives, we make all of this food from scratch, we do so many things and I can tell you the majority of the student body doesn’t know that we do those things,” Smith says. “We wanted them to know what Metz stands for: That we’re a culinary-driven company. We really take the quality of the food very seriously.”

Through Metz’s partnership with e.a.t., it seems like students will soon find out.