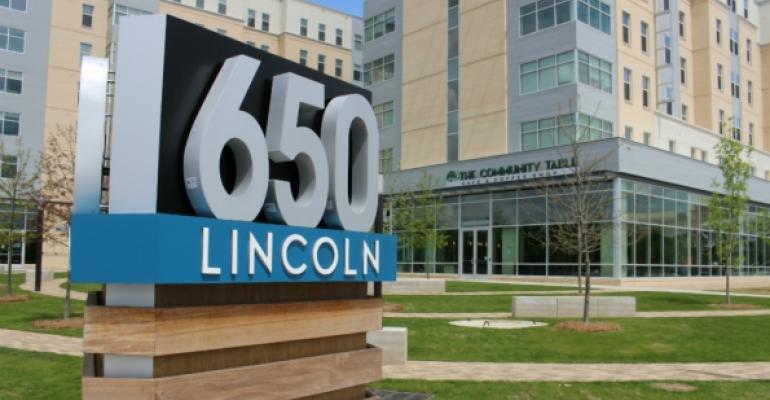 <p>The Community Table sits in a growing section of the USC campus, as well as near several prominent off-campus sites like the State Capitol.</p>
News & Trends>Colleges & Universities

Community Table at the University of South Carolina is designed as a gathering place in both décor and menu.

The Community Table restaurant, opened last November on the campus of the University of South Carolina (USC) in Columbia, is designed to encourage interaction and gathering, not just among members of the campus community but with neighbors from surrounding area as well.

The eatery has helped integrate USC’s campus foodservice into the larger Columbia community, serving as a place for church groups, local organizations and professionals on lunch break from nearby offices to get together.

Beyond the 50 Power Players: University of South Carolina

The restaurant’s layout centers around two large tables that serve as get-together spots for groups, while the adjacent booth seating allows friends to sit and lounge. Even the food promotes interaction, with its larger-than-normal portions that are made to be shared.

As a sign of campus commitment to sustainability, one of the large tables is made from the remains of a historic 130-year-old oak tree struck by lightning in 2008 that eventually had to be cut down due to safety issues.

The Community Table features self-ordering kiosks where students can make their selections conveniently. Award-winning Certified Chef Eric Pearce personally created the items on the “meant to share” menu, which includes customer favorites such as Adluh low country shrimp and grits (Adluh is a local milling company), creamy spinach and artichoke dip with oversized pita chips and the skillet cookie topped with a scoop of vanilla ice cream and whipped cream.

The restaurant overcame adversity just to open as one of the biggest floods in local history hit the Columbia area last October, destroying houses and businesses and forcing the cancellation of classes for a week as parts of Columbia remained under water for days.

Once the all clear was sounded, preparations for the opening resumed and Community Table opened the following month.

The restaurant’s price tag of almost $2.3 million was justified by its unique profile in the campus dining mix and its location in an apartment building on the west side of campus, which is the area the school’s administration plans much of the college’s growth. Already, new academic buildings and student housing nearby have produced a large influx of customers for The Community Table, and traffic is expected to continue to grow as the next phase of student accommodations, Greek village sorority and fraternity houses and educational buildings open in the area this fall.

The restaurant is also near USC’s major athletic facilities and within a short drive of the South Carolina State House and Columbia’s popular Vista nightlife hub.

“The restaurant opening has paid off immensely,” says Rachel Ayala, general manager for campus dining services provider Sodexo at USC. “Not only has the restaurant demonstrated positive financials, but also has increased Carolina Dining’s brand identity and customer satisfaction at USC. Carolina Dining is setting the future of quality institutional foodservice—it’s not about mass feeding, it’s about quality seating, engaging technology, on-trend foods and the Community Table does just that. The Community Table has set an example for dining on campus and how the restaurant can infuse this type of service as they look to reimagine existing dining locations.”

In fact, Ayala says, there was so much demand early on that The Community Table had to hire additional staff to accommodate the large amount of customers.

“The success of The Community Table was evaluated by customer reaction and retention rate,” she adds. “There were an exuberant amount of positive reviews from the beginning, validating the restaurant’s existence. Even after the 100-year flood, customers were clamoring for their wallets and the lines out of the door! It was awesome to see even after a major disaster, customers were still willing to come, willing to wait and willing to pay.”