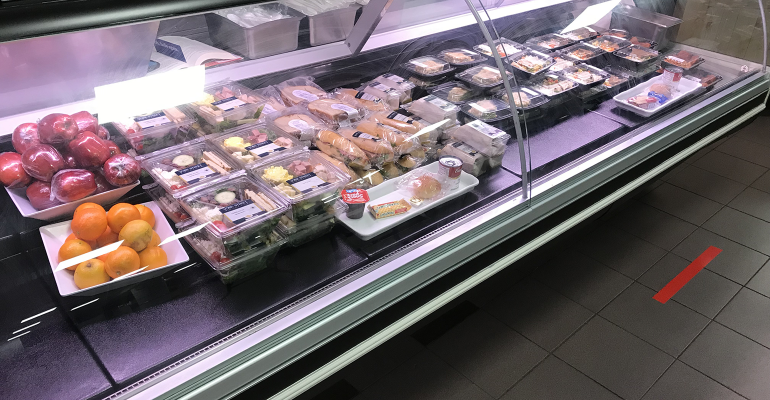 Chartwells' NYU dining services prepares for fall—whatever it might bring

As the university brings students back to campus in the previous coronavirus hotspot, dining operations need to remain flexible.

Like many foodservice operations around the country, the changes to NYU Dining came abruptly in mid-March, when the college moved to remote learning in response to coronavirus. With the residence halls closed, only a small number of students who weren’t able to leave New York City remained on campus. But they still had to be fed.

“There were about 274 students still on campus and 137 meal plans,” says NYU Associate Director of Dining Services Carolyn Milea. “We were serving 50 to 60 students a day.” NYU shut down all but one dining hall, the Paladium, and quickly moved to a service model that would accommodate social distancing for both employees and students.

That meant serving boxed meals instead of cooking food from scratch. “[NYU dining contractor] Chartwells began sourcing food from local vendors,” Milea says. They brought in premade entrées, salads and sandwiches, along with continental breakfast-style items like bagels, yogurt and breakfast sandwiches. Individual items were pre-packaged in disposable packaging, with disposable cutlery. “Most dorms had microwaves, so it included options that students could reheat,” says Milea. 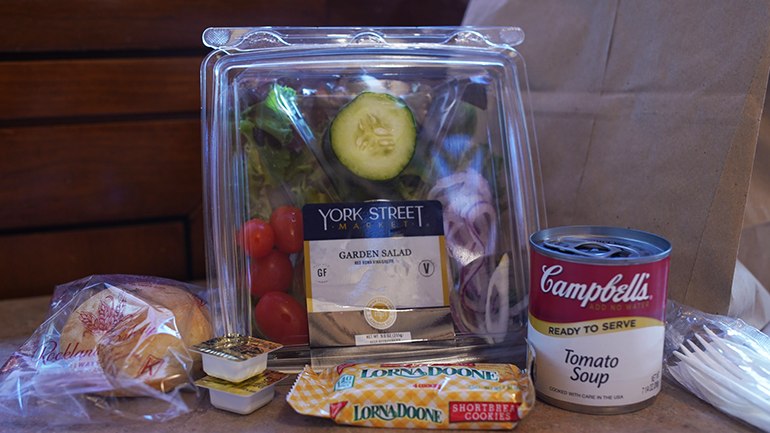 A premade meal served during the spring semester. In the fall, Tier 1 meals would look similar.

Milea’s team limited traffic in and out of the Paladium by having students come in just once a day, between 9 a.m. and 1 p.m. to pick up food for breakfast, lunch and dinner. One by one, they’d walk up to a refrigerated case and make their selections, and a staffer behind the case would put the items in a bag. Everyone wore masks and gloves.

The dining situation could look almost identical when NYU resumes in-person learning in August. But the restrictions might also be eased, depending on what the COVID-19 situation looks like in New York by late summer. “Our plan is a three-tiered approach. As we get closer and know what the state and city mandates are, we’ll know which tier we’re going to fall in,” Milea says.

Tier 1, the most stringent, would continue the protocols put into place in the spring, but with all campus dining halls open instead of just one. “It’s the most conservative, with grab-and-go options and no seating area available,” says Milea.

Tier 2 eases the restrictions with a mix of Tier 1-style food offerings and served stations. “We’d have quick, easy menus served by associates. There will not be any self-serve stations,” Milea says.  Rice bowls, for instance, could be made in-house and be assembled ahead of time so students could get their food quickly. There would be limited dining room seating to accommodate for social distancing, and plexiglass barriers separating students from servers and cashiers. Masks and gloves would still be required.

Tier 3, the least strict, is similar to Tier 2 in terms of social distancing protocols. “There’s still no self-serve and limited dining room space,” Milea says. “But all stations would be open, and the menu might be looser and more creative.”

The NYU Dining team is discussing other possible strategies to promote distancing and reduce transmission risk, like online ordering and pickup services. They’re also exploring app-based technology that could show students real-time dining hall density. If a hall is busy, a student might opt to go to another one or wait until later to get food.

Ultimately, the goal is to be able to move easily between tiers as needed depending on the virus numbers. Even if the dining halls open at Tier 2 or Tier 1, being able to quickly tighten restrictions as needed is crucial to nipping outbreaks in the bud. “We’re comfortable we can pivot pretty quickly,” Milea says.

As for when NYU Dining will know its starting point for the fall semester? That all depends how the first half of summer goes. “I would think by mid-July we’ll have a decision about which tier we’ll open with,” says Milea.

Regardless of what’s decided, Milea and her team won’t have to call the shots alone. “Everyone is represented in the decision making,” she says. NYU housing, logistics and emergency planning department, along with public relations, have all been part of the conversation for how dining services will operate safely. And Milea is confident that the coordinated team effort will result in positive experience for students and dining employees. “We all have a little bit of hesitation, but we have a great team and a great partner with Chartwells,” she says. “We’re in a good place.”