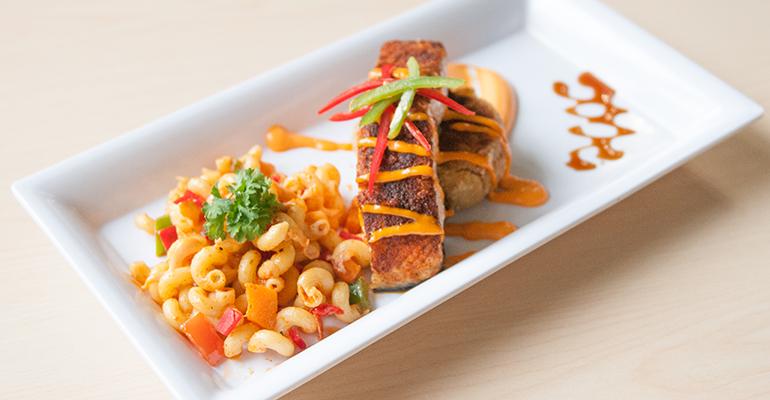 Chef Ray Nottie draws on his years at hip B&I accounts and his roots in the American South to take kosher food further at Touro University.

Chef Ray Nottie knew just the basics of kosher cooking when he was hired for the chef position at Touro University California (TUC).

Describing his meeting with a supervising rabbi, he said, ‘I may not know 100 percent about kosher, but I’ve got the passion for food,’” Nottie says. “‘I know international cuisine, you know kosher. Let’s come together and make this happen.”

TUC is a university under Jewish auspices with 1,400 students on 44 acres of land in Vallejo, Calif.’s Mare Island. There are 20 branches of the Touro College and University System, with locations in New York City, Jerusalem and Paris, all kosher supervised.

Most students and faculty at TUC aren’t Jewish and don’t keep kosher, but the kitchen is kept kosher by the books and is overseen by rabbis and mashgiachs (supervisors tasked with upholding Jewish standards for kashrut, or Jewish dietary law).

After working for years as a chef and manager in prestigious California B&I dining locations as Google, Facebook and Hewlett-Packard and also the International House at UC Berkeley, Nottie can cook many world cuisines with confidence.

Using his passion for food and hospitality as a guide, Nottie, who “loves a challenge,” has over the past few years developed ways to bring that internationally flavored cooking style he’s acquired over the years into kosher cooking at TUC. “His receptiveness to learning was refreshing,” Rabbi Elchonon Tenenbaum, director of the Napa Valley Chabad Jewish Center, told The Jewish News of Northern California. “He challenges himself to make regular dishes that are normally not kosher. He doesn’t look at it like his arm is tied behind his back; he sees it as an extra challenge, continuing his art with slightly different rules.”

Those rules go beyond the basics of using only meat butchered a prescribed way, no shellfish, pork, or mixing meat and dairy. In TOC’s kosher kitchen, mashgiachs supervise everything from the thorough washing of greens (bugs aren’t kosher) to the handling of utensils. It’s the mashgiachs who turn on the stoves. (“There has to a connection between someone who is Jewish and the food,” Nottie explains). Manufactured products that are certified kosher may not always pass muster with the rabbi, either, making for a steep learning curve.

Challenges are taken in stride, something Nottie attributes to “being a joyful person and having a good team.”

In terms of recipe development, Nottie has found substitutions that turn traditionally non-kosher dishes kosher. Some dishes require more tinkering than others.

For a kosher pad Thai, for example, Nottie knew he couldn’t use fish sauce (a key component) because it’s made with shellfish. So he worked on perfecting a blend of tamari (gluten-free soy sauce) and rice wine vinegar that could add that same pungent kick.

“Fish sauce is funky and it has a bitter flavor, but if I can get that flavor and not use fish sauce, then I’ve won you over,” Nottie says. Cream sauces are one of the toughest to make kosher, because if you want to pair that sauce with meat, kosher law says you can’t have milk or butter in those sauces. But Nottie leans on a couple of different very solid methods to get to a creamy sauce, including nondairy milk and cheese substitutes. Tofu cream can be run through a food processor and made velvety, then simmered with vegetable stock to replicate a béchamel sauce, for example.

Nottie has started serving food during the week with themes. Every Monday is healthy cuisine, with items like honey-Dijon chicken and couscous-stuffed eggplant. Tuesday, Nottie creates Asian favorites like spicy pepper steak with crispy tofu. Wednesday, it’s time for pasta comfort with chicken penne pasta or egg noodle Florentine. Thursday is Soul Food cuisine, a day when Nottie draws on his Mississippi roots and offers items like red snapper and grits, and Friday is Latin-inspired cuisine like beef tamale pie or chicken and tofu posole stew.

Nottie calls it “a blessing” to have the opportunity to introduce someone like a California rabbi to a dish like gumbo. “I’m not trying to sell you something that’s not kosher. I’m blessed to be able to teach you how you can have this food.”