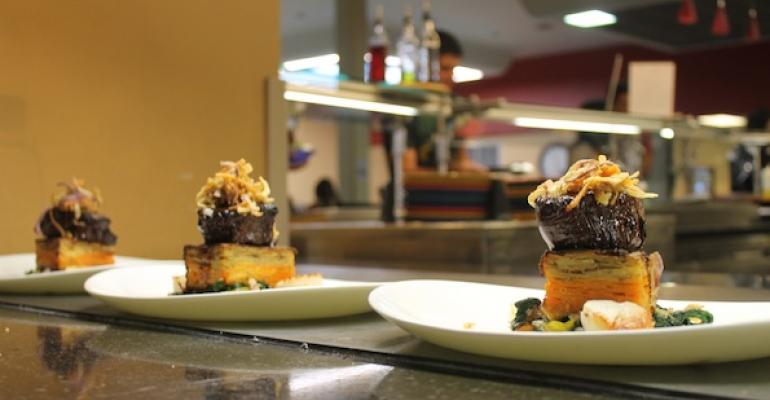 The word was passed only through vague references on the dining department’s Facebook page, but that was enough. The 50 available gourmet meals were gobbled up in eight minutes by students who were paying attention.

Colorado State University’s Secret Supper initiative, piloted last spring and launched this fall, is designed to be driven by social media. Basically, the idea is that on any given day, at any given dining center, the staff will prepare fifty gourmet dinners without any notice given to the students about the menu, time or location.

“The only way students are aware of the upcoming dinners are some random hints we put on our Facebook page leading up to the event,” says Christian Herrmann, assistant director of communications.

It’s a way to give the students something out-of-the-ordinary, but with a dash of mystery.

“I was going through our trade magazines and realized that other schools were creating gourmet menus, but usually in conjunction with special events,” explains Mark Petrino, senior associate director for dining services. “I wanted to do something a little more spontaneous.”

It’s also something special for the staff, says Peter Testory, assistant director for culinary operations. “When we proposed this to our production chefs, they jumped at the idea,” he says. “Their food cost was unlimited and we gave them the autonomy to be as creative with their staff as possible. It really got them out of the mundane job of cooking their cycle menu every day and let their imagination take over.”

“We pilot tested the program in the spring to see how the students would react, and we were astonished at the overwhelming popularity of the initiative,” Petrino says. “With little marketing and only vague hints on Facebook, some student figured out what was going on and were waiting at the Ram’s Horn [where the first Secret Supper was unveiled] before we opened for dinner.”

Given such success, CSU Dining Services has scheduled a Secret Supper each month that school is in session.