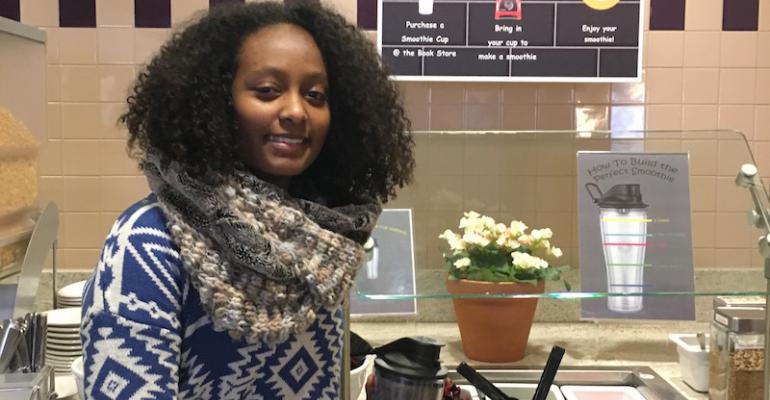 Do-it-yourself smoothie station a big hit in school’s residential dining halls, where students can concoct their own creations.

Students in two Colby College residential dining halls are really mixing it up this semester. The school’s universal access, all-you-care-to-eat Dana and Roberts Dining Halls debuted a self-serve smoothie bar concept earlier this year that allows students to make their own mixes from any ingredients available from the dining hall’s various serving stations.

The smoothies are made in a special cup that a student must purchase for $15; the cup can be reused indefinitely. “We did that to give them some skin in the game, so they’re not as likely to lose them,” explains Larry Llewellyn, director of dining services for Sodexo, which manages foodservice operations on the campus.

The cups are filled with the various ingredients chosen by the student and mounted on the power unit in the DIY smoothie station for blending. The cups, which come with drink-enabling lids, can be taken out of the dining halls. After they finish, students can either wash their own cups or hand it in to the dishroom for cleaning and sanitizing—“That’s mostly the guys who are maybe a little lazier about it,” Llewellyn laughs.

“We thought maybe 200 to 300 kids might be interested in this, but we’re over 715 [cups sold] now out of a population of 1,800 students, so it’s extremely popular,” Lewellyn says. He estimates that about 350 DIY smoothies are made on an average day at the two venues where the option is available.

In fact, usage sometimes becomes so heavy at peak periods that the power unit overheats and shuts off, and the staff has to switch it out with a fresh one until it can cool down.

Students are free to use any ingredients they wish to make their smoothies. The station itself has some standard options like yogurt, frozen berries, flaxseed and greens like spinach and kale, and the salad bar has other typical ingredients, but, of course, students will come up with their own exotic combinations, a practice known as “freestyling” from the popular Coke Freestyle self-serve soda fountain unit that allows customers to mix and match thousands of drink combinations.

One popular spinoff of the DIY smoothie option is its use to make milkshakes by combining ice cream with milk, Llewellyn says. Popular smoothie ingredients include the frozen berries as well as kale due to its superfood reputation.

“The idea came out of our dining services advisory committee,” Llewellyn says, “as a couple of students were interested in having smoothies available. It started more with athletes’ interest as they were looking for something they could have every day as opposed to the smoothie specials we conducted in the past.”

Some investigation of the idea’s feasibility led to some conclusions.

The traditional smoothie station where a staffer makes the drinks behind a counter was rejected as too labor intensive for use in multiple venues. “Plus, the students absolutely love anything they can do themselves where they are in control of what goes into it,” Llewellyn notes.

Smoothie ingredients were already readily available, but the dining team had to find suitable equipment. The manufacturer they chose, Vitamix, also supplies the cups at a discount.

The program was piloted in December and then rolled out the start of the spring semester. Usage built slowly but really escalated over the last two months, Llewellyn says.