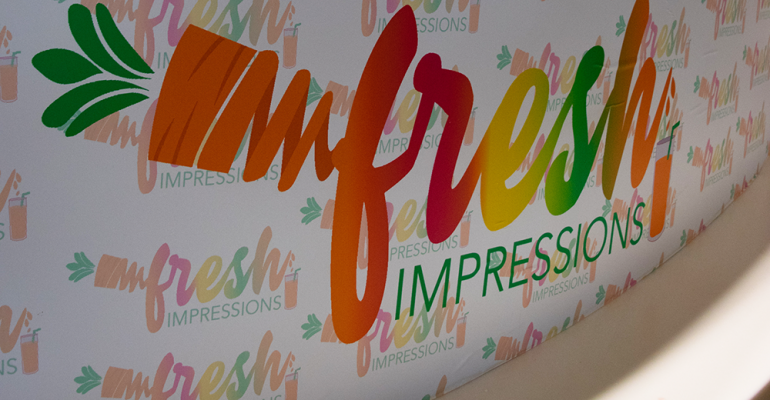 Fresh Impressions has boosted both sales and customer satisfaction in its location compared to the previous concept.
News & Trends>Colleges & Universities

How to balance ecological responsibility with meeting student dining preferences? That’s a question that perennially challenges college dining operators, but one that the Sodexo-operated Binghamton University Dining Services (BUDS) team led by Retail Manager Christopher Harasta, Chef Karta Perez and Dietitian Julie Lee, RD, looked to address by working with a group that should know some answers to both sides of the question: the Binghamton University Food Sustainability (BUFS) student sustainability group on campus.

The result was Fresh Impressions, a new BUDS-operated concept in the school’s MarketPlace dining venue that opened Sept.12 last year and exclusively served plant-based hot meals such as zoodle bowls as well as fresh-squeezed juices. Located in a space that previously held a snack and milkshake bar, it proceeded to produce a 38% overall increase in the number of positive responses from students compared to that previous concept. 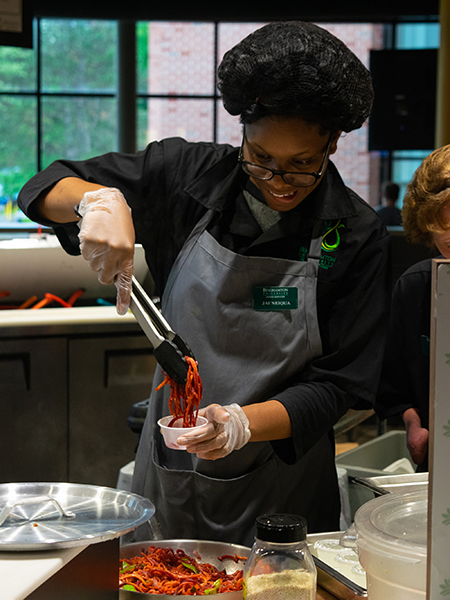 Student feedback received over the concept’s first semester of operation was used to modify its menu so it could appeal to a wider demographic of dietary needs.

“We looked to a student group for their insight on satisfying student requests for delicious food that was both healthy and sustainable,” says Harasta about the concept’s genesis.

The sustainability focus was on reducing the resource consumption from the food, with special attention paid to picking ingredients that require very little water to grow and produce. Another emphasis was reducing the use of single-use plastic straws by substituting compostable sip-lids and paper straws for use with the various freshly squeezed juices offered at the station.

Student feedback received over the concept’s first semester of operation was then used to modify the station’s offerings to a point where it could appeal to a wider demographic of dietary needs, and noodle bowls and new protein additions now play a predominant role on the station’s hot entrée menu, to the point where transactions at the station have doubled from its original incarnation.

Beverage options include green tea, 100% fresh squeezed orange juice and lemonade made with freshly squeezed lemons and sugar. Beverages can be enhanced with a shot of ginger, beet juice or carrot juice for a boost of both flavor and nutrition.

But that’s just the beginning.

“We are looking forward to developing this concept even further and continuing to reinforce our commitment to sustainability through the food we serve on campus,” Harasta declares.