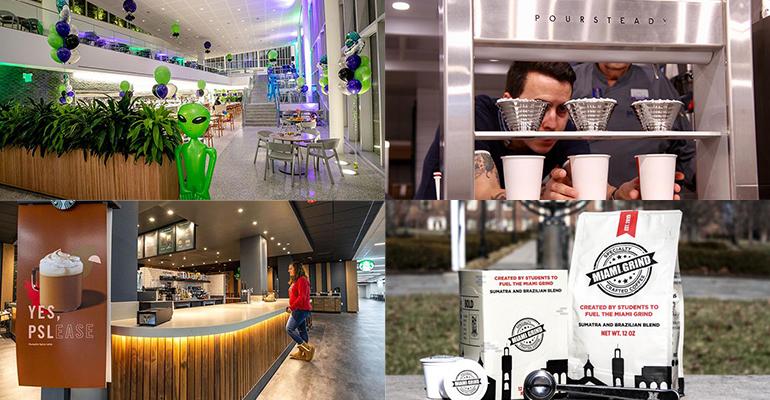 “The university hired consultants to work with the students and faculty to really understand what the desires and needs were for this space, which was serving pizzas and sandwiches in addition to selling standard c-store fare,” said Joe Graves, Butler Dining general manager. The space was formerly home to several QSR chains like Taco Bell, Burger King and Papa John's but the c-store now provides a salad bar, fresh fruit smoothies and vegan options in addition to the typical c-store fare. Read more about Plum Market Kitchen.

Also working on smoothies is Sonoma State University where a robot called Chef B takes onsite and mobile smoothie orders in the campus's Charlie Brown's Café. The autonomous food robot prepares and serves smoothies that are ordered and paid for via kiosks or mobile, serving eight different smoothies with limited customization.

"We know the community is excited, they love the innovation, especially as we’re not that far from Silicon Valley, which is why we thought it would be a shame not to have such innovation on our campus and be a part of the conversation and what people expect,” said Casey Kelly, marketing manager for Entrepreneurial Activities at Sonoma State. Read more about Chef B and the students of Sonoma State.

See what else was trending this month in college dining.