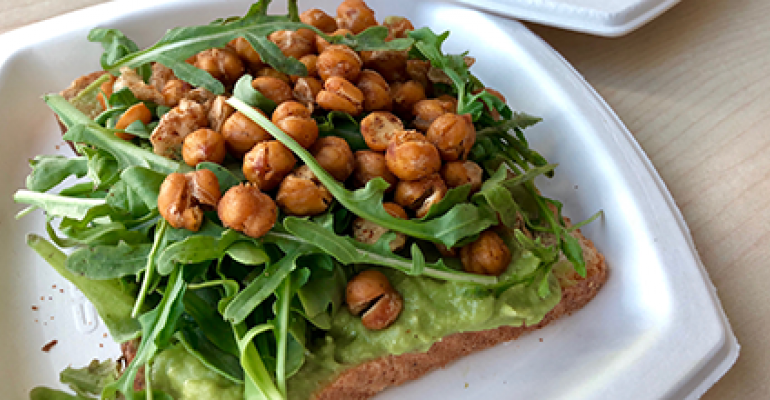 NAIT’s Square Root is on a mission to showcase plant-based menus.

Northern Alberta Institute of Technology (NAIT) has opened Square Root, one of the first exclusively vegan eateries on a secondary campus in Canada, which is a big deal in a province famous for its beef. “We like to joke that Alberta is the Texas of Canada,” says Nick Creelman, NAIT’s registered dietitian who created the menu and recognizes the irony of championing tofu and chickpeas in cattle country.

Creelman says student and staff requests for vegan and vegetarian food choices have been on the rise at NAIT, a polytechnic school that serves more than 30,000 students across various locations in Edmonton, AB. “We offered vegetarian options on Meatless Mondays and assorted vegan and vegetarian grab-and-go options in the past,” he says. The idea for opening an all-vegan location came last spring after Creelman and NAIT hosted 50 chefs as part of Fast Forward, an initiative out of Texas that connects institutions that support more plant-based menus in order to build a healthier, more sustainable food system. 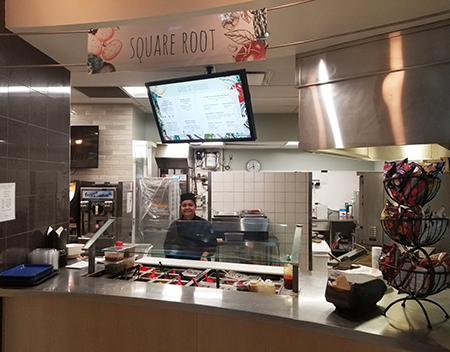 “Some of my chefs that I never thought would have been that excited were like, ‘You know I'm a meatatarian, but I would for sure make this vegan dish here or have it home,’” says Creelman of the conference. “The chefs were amazed by what they could create using exclusively vegan ingredients.”

With recipes tried and tested, and excitement high, another essential variable fell into place. “It just so happens that a space opened up in bytes, the food court at our main campus’s HP Centre building,” says Creelman. In September, Square Root opened alongside two other dining kiosks in bytes.

“By going exclusively vegan in this kiosk, we're trying to show the average person that plant-based can be delicious, colorful and satisfying,” says Creelman, adding that many of the recipes were pulled from the culinary exchange at Fast Forward. Right now, Square Root offers a base menu of breakfast options such as a tofu scramble wrap with grilled vegetables and Sriracha mayo; avocado toast with roasted chickpeas; and a chocolate quinoa bowl. The menu also includes afternoon fare: a create-your-own Buddha bowl with choice of base, protein, vegetables greens and dressing; golden lentil and cauliflower curry; sweet potatoes with crispy chickpeas; bahn mi sandwich with tofu; and the most popular dish, a quinoa protein burrito.

Creelman says one the main challenges is finding creative and exciting protein options as opposed to offering carbohydrate-heavy dishes. “We're trying to take advantage of a lot of local proteins like beans and chickpeas, and getting creative with tofu,” he says. “Actually, I never used to like tofu until we did the Fast Forward culinary training.”

With the base menu a success, Creelman says they are looking to introduce daily specials as well as grab-and-go options soon. “With our burrito so popular, we are looking to add other burrito recipes,” he says, “as well as a build-your-own vegan mac 'n cheese option. The ideas are starting to grow, and they're seemingly endless.”

While the campus isn’t huge, Creelman says most students stay and eat at the dining options in their own building but that Square Root has attracted some outside traffic. “I've had a few people specifically say, ‘Well we're not vegan, but we’re definitely going to eat there again. I really enjoyed it,’" he says. He’s also looking into a punch cards or loyalty program where if a guest buys 10 meals, they get one free as an added incentive to frequent Square Root.

He’s also promoting the new all-vegan option by setting up sample stations at campus events throughout the year. “I think some people have been surprised at the quality of the food because they just have it in their mind that if it doesn't have an animal protein then it can't be that good, or it can't be that satisfying,” he says. “Overall the reaction has been positive.”