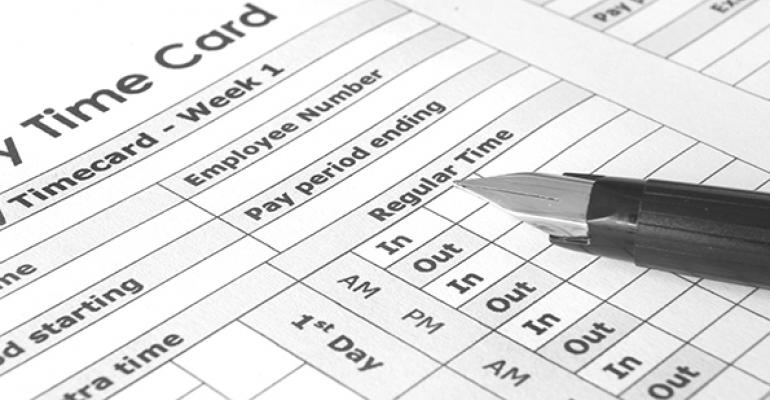 Every year at NACUFS, Food Management hosts a small group of operators to discuss the challenges and success stories in college foodservice. This three-hour conversation covered a wide array of topics, from menu development to what is local. One common theme all five participants had was a staffing struggle for the upcoming year. What follows are their comments regarding the topic. (Comments have been edited for length. A full copy of the transcript is available here.)

Jon Plodzik, director of dining hall operations, the University of New Hampshire: A lot of things that's been particularly troubling for us at the university is, because of our financial model, we have about half employees who have full benefits and about 60 percent who have nothing more than they get a paycheck at the end of the week. So they're classified by us as temporary workers. And so it's getting more and more difficult for us to obtain quality applicants and retain quality applicants because you have to have someone pass away in a benefited position in order for it to be open. And then, historically, over the last couple years, as soon as a position was available, [if] it had benefits, it was kind of removed from my availability. Because of budget, ‘Oh, you know what, do you really need to have that position?’ You could probably get somebody who would do that on a temporary basis and such, so it really, quite honestly, ruins your culture, and it cheapens your program if you're not really careful and conscious of this.

We spend an awful lot of time trying to counter that by really trying to sell the wonderful attributes about working for UNH dining and the culture that we created. Because I know at the end of the day they could get a job somewhere else that might pay more, and they could get a job, certainly, that would have benefits in the area somewhere. So how do I hold onto those folks? And I do it by trying to provide some things that make them feel like, ‘Boy, I have to do this. I have to work at UNH.’ That's been a real struggle for us. I don't think it's going to get any easier with the economy for sure. As it gets better, I'm losing good players right now. And I was telling my boss [who asked], ‘What do you mean you need to hire people?’ I'm like, ‘Yeah, people depart, and that's what happens. When you don't offer them any security, guess what, they're not secure, and they run.’ I think that's going to be something we're going to have to deal with and [try] to find that balance financially.

Because now these individuals who don't have benefits need to work and they want to work with us, but they don't have any vacation time. They work year-round, and all of a sudden you can't have them work year-round. You have to have the summer off. And the immediate question is, ‘What am I going to do now?’ And so you know when they're off in the summer you may never see them again.

There's fewer and fewer students at Michigan that are interested in working for us, and our labor model is built around hiring and employing about a couple thousand students every year.

We're short significantly with student employees to the tune of 25 to 30 percent, which then forces us to go to temporary employees, which aren't really the numbers we need, two to three hundred of them. And the turnover that's associated with that, we end up—the talent we get is just dismal.

Staffing [is] probably our biggest challenge because the geographic area where West Point is situated with a river, federal land, state land and kind of a mountain that separates us from any population over 6,000 people is kind of a challenge. Couple that with the fact that when you're employed by me, you're a federal employee, and the background checks are just fierce today. By the time I put in a request for a job to be advertised, it's somewhere between eight and 10 weeks before I can get a person in. That means I probably interviewed them probably two weeks into that, maybe three weeks into that. By the time I interview them and select them, they've selected another job before they get the phone call that they’re finally ready to start work. And, again, for us at West Point, we can't employ any students,

Well, in the state of New York, I have gone through three minimum wage increases in the last three years. It's gone from $7.75, and in December we're going to $9 an hour. And what does it mean for me? No. 1, we were a very attractive employer a few years ago when we were starting people at $9.50 an hour. Because of our union contract and the economies of our business, that $9.50 an hour is where we've got to start them, but now it's not as attractive anymore. It's all compressing, and when you're attracting the talent now we need to attract, it's very difficult.

MANGAN: In Michigan we compete with the businesses in Ann Arbor, so we're surrounded by restaurants. We're surrounded by places where the students can make a pretty good wage. So our starting wages for students are going up to $10 an hour this year. Our temp employees are up around $12. Our full-time or unionized, they're all on living wage standards plus benefits. So we're in good shape. We just have to build it into the program, and as things move up, we're probably going to try to keep with it. We can't find enough students at the $9 wage we pay now. We're going to have to go up to attract them. Ten dollars an hour is cheaper than hiring more temps.

And we have promotional jobs for all the students as well. So they can be making 13, 14, 15 dollars an hour if they want to take leadership roles. So what we're seeing, though, with this is management wage compression. We're going through an equity survey right now. We're going to be raising our entry-level wages this year. In the retail areas, we've got 24 operations. It's going to cost us close to $100,000 to raise the management wages up to where we need, and then in the residential area, it will probably be in that same ballpark. We can't recruit entry-level management because it's getting where you need to pay $40,000 to get somebody out of college.

A culinary track for student employees

PLODZIK: You know, we struggle particularly with the student piece. Most of my other staff are above even $10, but the city of Portland, Maine, which is an hour from me, raised their minimum to $10 an hour within the city. So I know the city of Portsmouth, which is right in my backyard, will match that because that's a competing city.

Then we'll get that compression where students are making very close to what our full-timers are making. They might be making $1.50 more an hour, and then you start thinking, ‘What is this about?’ And we've been trying to find ways, particularly on Friday and Saturday nights when almost everybody that works with me calls out, to try to provide some sort of incentive. So we're raising our student wages this year, but the challenge is we have to make that increase of 75 cents an hour fit into the same budget number that we had prior to that.

This was the first year I didn't have a waiting list of students to join us. I think it's because the economy is better. Parents are saying you don't need to work. I've got plenty of money, and because we've spoiled them, they [think], ‘Hey, why would I want to work on Friday night? I don't have to. Couldn't I get something to work somewhere else Monday through Thursday during the day?’ Perfect. And so, you know, those are the hours that I need people the most. Those are the nights we're the busiest in our retails and, you know, even in the halls still cranking away. So it's not a good picture, and I think the idea of raising the minimum wage is going to continue to put more pressure on us to try to find ways to drive costs out of this model somewhere to balance it all and then deal with the fact that once you raise that minimum everyone is going to have to go up to keep it kind of consistent throughout.

MANGAN: One of the big things I see is a lot of millennials this time around do not want to be seen serving their peers. It's much harder to place people in the halls than it is in our retail shops. We don't really have a lot of problem filling spots in our retail stores. They'll work as a barista because Starbucks is cool and all that.

One of the things we're doing in our halls is we're creating a culinary track for student employees. With the advent of the Food Channel, there's foodies everywhere on my campus. It's unbelievable. We're going to start a track where our students will rotate through different experiences in the kitchen and meat fabrication all the way through produce, fruit cutting and then cooking and serving. So we're trying to create a track that will be interesting to them to take along with them as they go along, teach them to do some cooking classes and teach them how to do things when they move off campus away from us, which seems to be attracting some interest.

Editor’s note: The fifth participant in the roundtable was Sheryl Kidwell, residential assistant director, the University of Kansas.