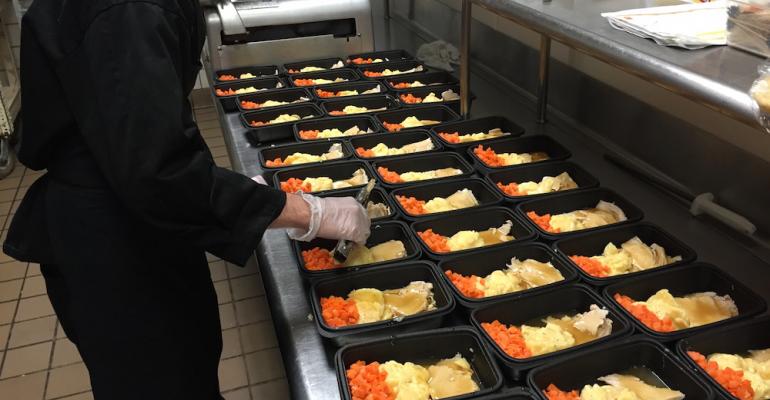 A group of 40 youngsters from impoverished families in the Dallas School District in Pennsylvania are now getting six supper meals a week delivered to their homes thanks to an initiative by contract foodservice firm Metz Culinary Management at nearby Misericordia University.

The meals are prepared in the college’s central kitchen and delivered by volunteers from the university of the surrounding community. For example, a recent delivery was made by members of the Mistericorida football team.

The program, called Dinners for Kids, launched May 9 and will continue through the summer, says Bruce Deeble, general manager for Metz at Misericordia, where the company manages campus dining operations.

“The kitchen doesn’t shut down even though spring classes are over,” he says. “We have summer classes, adult classes as well as the camps and other activities that take place here over the summer, so there are people here to continue making the meals for the kids supper program.”

The idea for Dinner for Kids was first developed by commercial restaurateurs Dave and Edna Tevet and rolled out in nearby Wyoming Valley West School District five years ago. The Tevets now provide meals to more than a hundred kids in the district, financing it out of their own pockets.

Metz took up the idea because the Metz family is from the Dallas area and wanted to support the community, Deeble says.

“We got involved through Susan McDonald, the social work coordinator here at the university. She had been speaking with David [Tevet] and he said he was interested in expanding into the Back Mountain, which is in Dallas, Pa. [The Metz family] all grew up in the Back Mountain, so we were interested right off the bat.”

McDonald helped coordinate among the Tevets, Metz and the Dallas School District to launch the program.

The schedule is fairly basic. The Misericordia kitchen prepares 80 meals three times a week for deliveries Monday, Wednesday and Friday to the individual homes. They are packaged in plastic, microwaveable containers purchased specially for the program. The ingredients come out of the standing stock in the kitchen storage areas.

“We figure a time of day when the production [in the Misericordia central kitchen] is not as high, find a spot and put them together,” Deeble says about the production process and timing. The employees who do the meal prep are on the clock with Metz absorbing the cost, Deeble adds.

The meals range from pasta and meatballs to turkey and stuffing with mashed potatoes and a vegetable to chicken Parmesan.
The menu was based on the Tevets’ experience. “We have quite a variety of food available here at the university,” Deeble says, “but we also try to make it healthy as possible.”