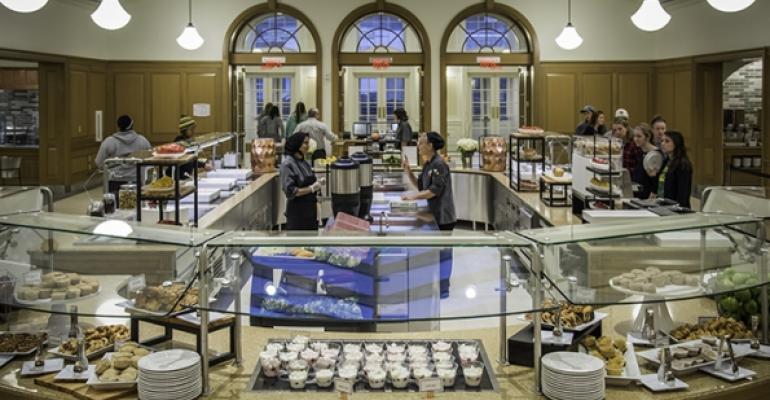 How DePauw University’s newly opened Hoover Hall is bringing people together, one meal at a time.

A liberal arts education isn’t just achieved in the classroom or the library. It also happens inside dorm rooms, at student centers—and yes, inside the dining hall.

“DePauw is like other small liberal arts schools—we have a lot of students from different backgrounds that tend to self-segregate. A large, communal dining space helps bring people together,” says John Hecko, general manger for Bon Appetit, which provides foodservice for the Greencastle, Ind., school.

Before Hoover Hall, DePauw had two smaller, all-you-care-to-eat dining facilities (along with express dining locations scattered across campus). Freshmen tended to stick to one facility, while upperclassmen ate at the other. And both spaces had the typical seating layout—lots and lots of tables for small groups. When Hoover Hall opened in the center of campus, both of those locations were closed (the express dining options remained). “This brought everyone under one roof,” Hecko says. Still, the team who designed Hoover Hall recognized that a centralized dining hub alone probably wasn’t enough to encourage strangers to start chatting with each other. So they made a simple—but significant—change: Instead of filling Hoover Hall with small round tables, they brought in long endcap tables that each seated 100 people. “It forces people to not sit in clusters of four to six,” Hecko says. Several private dining rooms, which faculty and staff can book for meetings, form a periphery around the communal dining area. In all, the facility can hold 770 people.

Opening Hoover Hall was about more than just fostering community, though. Millennial students prefer having their meals made to order right in front of them, but the old dining facilities limited Bon Appetit’s ability to do action stations. “This gives us the opportunity to do a lot of the action cooking stations that we prefer to do. The servery itself has a nice flow to it,” Hecko says.

And no matter what diners are in the mood for, they’ll find something delicious from one of Hoover Hall’s eight serving zones. Spice, for instance, offers globally inspired fare like hoisin eggplant and green beans with crispy tofu; pub-style fish and chips; and lobio, a traditional Georgian mashed kidney bean stew with garlic chilies, dried marigold and vinegar. Ciao serves up brick-oven pizzas with creative toppings like chicken, manchego cheese and honey Sriracha sauce. At Everyday Char, students can get burgers, Philly cheese steaks, sweet potato fries and chipotle black bean burgers. And at Flip, they’ll find made-to-order dishes like pasta with spicy tomato sauce and crumbled cod, or pasta with blue cheese Alfredo, sun-dried tomatoes and balsamic drizzle.

That’s not all. Customers can serve themselves at the large salad bar, market deli station, panini press and soup station. They can even get flavorful, fruit-infused water at the agua fresca bar, as a healthier alternative to soda or other sugary drinks.

Sustainability is on the menu, too. In addition to sourcing much of its produce from local farms, a student-run initiative has Hoover Hall on track to become completely paper-free. “You won’t see garbage bins,” Hecko says. Part of the facility’s ambitious program includes reusable to-go containers, which customers can grab at the entrance kiosks. “Each container has a barcode on it, which we swipe,” Hecko says. Customers have 48 hours to return their containers—and they don’t need to worry about washing them. All of the containers are cleaned on-site.

Hoover Hall has been open for less than a month, so Hecko and his team are still getting a feel for how the facility works. “My job right now has been to sit back and see what the feel of the space wants to be,” he says.

So far, though, it’s been a success. “For the first time in the school’s history, I have 95 percent of my staff under one roof,” Hecko says. Students are interacting more at mealtime, and folks who live in surrounding Greencastle [a neighboring city] are even coming in to dine alongside them. “We’ve accomplished what our overall goal was,” he says. “In the climate we live in today, Hoover Hall has certainly brought the feel of community back to this university.”