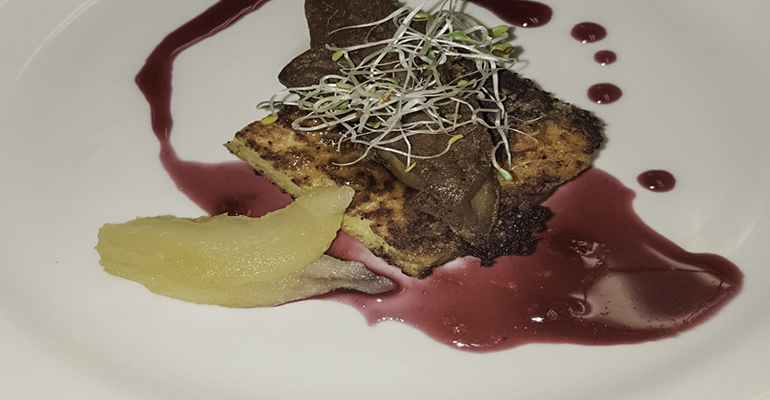 Rising from the south-central Nebraska prairie, you’ll find Hasting, a small town with a population of 25,000. At Hastings College, you’ll find Chef Eron Baker, director of dining, trying to broaden local culinary palettes. “I'm a San Diego guy, and I noticed that people here tend to stick with meat and potatoes,” he says. “If you cook them something different, they’re hesitant to eat it.”

In spring 2017, Baker and Fresh Ideas, the school’s foodservice management company, launched the Premium Entrée program, in which featured entrées change daily and are only offered in limited quantities. “We have a culinary expo station that is our action station, but I wanted to be able to serve something nicer and also have an outlet for creativity as far as the chef goes,” he says. During lunch Monday through Friday, people on the meal plan or using its flex bucks can order the premium entrée at a station in the dining room, where it is served by the chef who cooked it. The program is such a success that faculty and students jockey in line to make sure they get one of the 50 entrees, which typically sell out within an hour. It caters to both adventurous students looking to try new food and faculty, who typically have more refined palates. “Let’s be honest, sometimes a more mature person doesn't want to eat chicken nuggets,” he says, adding that one of the program’s unforeseen benefits is that twice as many faculty now come in to dine.

Keeping the number of available entrées to 50 keeps the program feeling exclusive, says Baker, who also adds an air of mystique by not advertising the entrée of the day. “It’s created a following of intrigued foodies on campus,” he says. “People start asking the cashier when they first enter what the Premium Entrée is for the day.”

The college enrollment team has even included the program in its recruiting marketing materials for the school, and casual meal sales have increased more than $10,000 a semester. “We also use the Premium Entrée station to do chef competitions, and students get to vote,” says Baker. To promote the program, they’ve also gotten the president of the college to work the Premium Entrée station doing prep work on lunch. The program has its fair share of benefits for the back of house as well. “As a chef, I think you're always looking to be challenged a bit and channel your creativity – this is where we get our pride from,” he says. With parameters such as a daily entrée budget allotment, product availability, and which foods are in season, chefs are charged with making something delicious. “We even have a little informal competition in the kitchen on whose entrées sell out the fastest,” Baker says.

The Premium Entrée program also makes fiscal sense. The limited supply allows Baker to allocate a daily dollar amount for the program to stay within their weekly food budget. As the entrées are made from scratch and make use of the catering production, the program’s cost is well controlled with each entrée costing between $3 and $5. “Most of the Premium Entrée participants—97%—generally only eat the premium entrée, reducing the seconds factor for that meal resulting in a controlled plate cost for the program,” Baker adds.

Looking back, Baker says the Premium Entrée program was a natural evolution of other ways he’s tried to increase gastronomical awareness on the Hasting College campus. In 2016, he launched a pop-up restaurant, where the cuisine changes monthly. “It's fun—the student council will vote and say, ‘Hey we want Chinese food,’" Bakers says. “And I say, ‘OK, let's do it.’”

As for the Premium Entrée Program, Baker is pleased that it’s working so well as is but says they are considering expanding the program to dinner or creating a dedicated dining room for Premium Entrée diners.