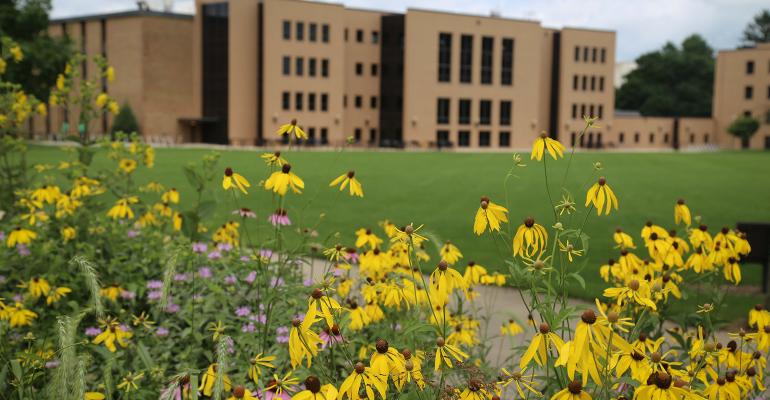 Dandelion cookies and salad were among menu items featured at Goshen College’s dining hall to highlight the critical role pollinator species play in the ecosystem.

They held a real “bee in” at Goshen College in Indiana on April 18.

The event, called Pollinator and Dandelion Day, was held in Goshen’s Westlawn Dining Hall and featured foods such as dandelion cookies, a salad highlighting items that heavily depend on pollination and a stir-fry incorporating dandelion flowers. This was Goshen’s fifth annual Pollinator and Dandelion Day event and helped the school achieve Bee Campus USA certification from the Bee City USA organization, which endorses a set of commitments for creating sustainable habitats for the pollinator species that it sees as vital to feeding the planet.

Holding such an event at least annually is one requirement of Bee Campus USA certification, along with maintaining spaces that attract and nurture pollinator species such as bees, hummingbirds, butterflies and even bats.

Goshen, which became the second college in the Midwest and 27th overall to achieve Bee Campus USA certification, converted some dozen acres of empty green spaces around campus to wildflower gardens five years ago. Cultivated without chemical pesticides, these spaces with their variety of flower colors and shapes and plants that flower at different times of the season to provide extended pollination opportunities have provided ideal environments for pollinator species.

Dandelions are among the first plants to bloom in the spring as the weather warms up, and some of these were harvested in mid-April by students led by Glenn Gilbert, the school’s sustainability and systems manager, for the Pollinator and Dandelion Day meal that is part of the campus’s Earth Day activities.

Corson was first exposed to dandelions as a food ingredient while a child, when he and his sister would pick the flowers for their grandmother to prepare. She used bacon glaze, vinegar and sugar, he recalls, and the recipes he uses now are a combination of those childhood memories augmented with internet research and his own experience as a chef of 27 years.

“Dandelions are bitter greens, so you really have to sweeten them after washing them down a lot,” Corson explains.

The dandelion cookies he developed for the event have a scone-like shape and texture and are made with the yellow part of the flowers, augmented with honey and vanilla.

The pollinator salad included ingredients such as lettuce, avocado, beets, grated carrots and artichokes that require the help of pollinators to bloom properly, Corson explains.

It was served at the salad bar, while the cookies and an Asian stir-fry incorporating fried tempura-battered dandelion flowers as well as more traditional components like bok choy, baby carrots and water chestnuts was served at the fusion station.

Westlawn is an all-you-care-to-eat facility so the exact number of students indulging in the unusual fare is difficult to measure, but the multistation facility saw 225 diners over the period the Pollinator and Dandelion Day menu was available, and the six to eight dozen cookies Corson baked were all served, each sliced into two pieces to reduce waste in case a diner took a bite, didn’t like it and wanted to toss the uneaten portion away.

“They are not like a sweet traditional sugar cookie so some students may not like them,” Corson explains, though he adds that most who did try them did seem to take to them.

Recipes for the dishes served were made available to interested students, along with educational materials about pollination and the role of bees and other pollinators in the ecosystem.

It’s something Corson, a beekeeper himself—he supplied the honey used to make the dandelion cookies from his own hives—considers a serious issue.

“It’s important to understand that a bee is not a threat but something that has a major role in our lives,” he says.