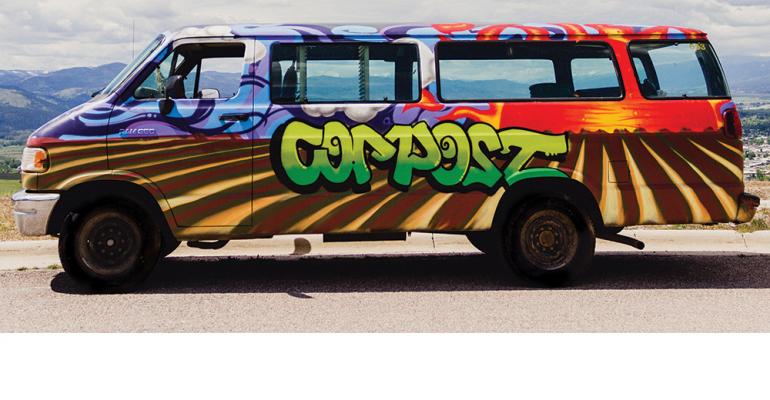 Compost van at Montana gets a cool new street style

Rarely do you see a van hauling compost roll up with this much swagger. It’s a streetwise look that also highlights agriculture and the importance of sustainability. Not something you see every day, unless you’re at the University of Montana in Missoula.

Soon after Camp Howard arrived on campus as the new director of dining, one of the first students he met was the resident graffiti artist, a mysterious, talented figure who wishes to remain anonymous.

Howard, having just transitioned from his longtime job as director of foodservice/executive chef at Vanderbilt University, was amenable to the idea of tricking out the truck, and gave the go-ahead. He says he was struck with how cool the design came out.

“I said, ‘Have him sketch something out for us first,’ and he comes back and presents this great idea, a super fun, whimsical look…he took the idea of compost to the next level,” Howard says.

Using nothing more than regular cans of spray paint, the artist took two days in dining services’ parking lot and transformed the formerly drab van into a rolling work of art that highlights the dining department’s commitment to composting.

The compost generated, thousands of pounds each week, is more than enough to nourish the extensive campus gardens.

“We actually produce more compost than we can handle, so we send out the excess to a local farm for them to use,” Howard says, adding that student employees work on all the steps of the composting process, including driving the van.

Since Howard has moved from Nashville to Missoula, he’s been getting used to his new surroundings, trying his hand at fly fishing and also learning about the ecosystems at work in his new home state, visiting a grass-fed cattle ranch and checking out the school gardens.

“The growing season here is short, but the things they’ve been doing here for years with the garden program is refreshing to see,” Howard says. “It’s a growing program and we’re continuing to grow, forging relationships with artisans and farmers…students and faculty members are so involved. It’s an environment where so many people are doing things to take care of our planet.”