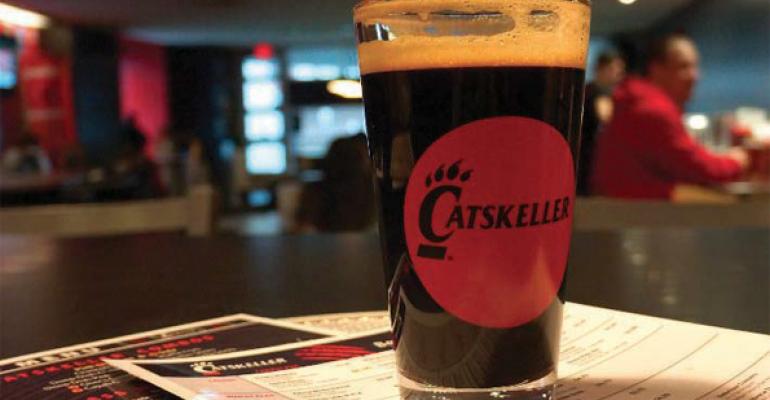 <p>The Catskeller at the University of Cincinnati has focused on craft beers since 2007, almost doubling previous sales. It has 8 rotating taps and 50+ beers on its menu.</p>
News & Trends>Colleges & Universities

The craft beer trend is moving into campus pubs and even sprouting a couple of brew-your-own operations.

The Cal Poly Pomona Foundation is opening a microbrew pub called Innovation Brew Works in the Center for Training, Technology and Innovation on the campus of California State Polytechnic University, Pomona. It will be staffed by hospitality and agriculture students under the direction of veteran area brewer Owen Williams, who teaches the Beer & Culture class at CPP.

“The students will engage in all aspects of brewing, from the growing of hops and barley to bottling the product,” says Aaron Neilson, director of dining for Cal Poly Pomona Foundation. Beer production is scheduled to begin in August, with the brews added to the onsite restaurant’s menu shortly afterwards.

With the move, Cal Poly Pomona says it will become the only university in the country with an onsite brewery that also sells its beers in a campus brewpub, but maybe not for long. Colorado State University’s $65 million renovation of its Lory Student Center, scheduled to open this fall, will include a brewery intended primarily to be academic, but which may also sell its products at Lory’s Ramskeller campus pub.

“That decision is up in the air right now,” says Doni Luckutt, marketing director for the Lory Center. “The main intention is to train highly skilled people in the fermentation process.”

Cal Poly Pomona and Colorado State will hardly be the only universities with brewery operations on campus.  The University of California-Davis and Oregon State University are two others, but neither produce beer for campus sale.

One campus brewery that did do so, at least until recently, was located at the University of Wisconsin-Platteville. UW-P’s brewery operated from 2004 until 2010 selling its self-branded products—Pioneer Pale Ale and 1866 Lager—at the school’s Pioneer Haus campus brewpub. Pioneer Haus continues to operate and sell beers, including some local craft brews, but none is produced on campus any longer.

In mid-2011, Louisiana State University announced plans to license its own branded beers through a local microbrewery, Tin Roof Brewing Co., as part of a partnership that would also teach LSU students about the art of brewing through the school’s food science training program. However, the school changed its mind six months later due to “bigger priorities than to maneuver the complexities of a venture this different and unique,” according to a news release at the time.

Of course, campus pubs are not rare, though ones selling microbrews and craft beers are less common. Still, with the growing popularity of such artisan products in the broader culture, it’s not surprising that some have joined the trend.

At the University of Cincinnati, the Catskeller began focusing on craft beers in 2007 and saw sales increase 93% in two years. It boasts eight rotating taps and 50 plus beers on its menu, it offers a weekly Pint Night featuring a specific brewery and glassware along with several annual events/festivals.

Other craft beer focused campus pubs include the Loft at Loyola Marymount, the Draught Horse at Temple, Porter’s Pub at UC-San Diego, the Den at the University of Houston and, most recently, the Pint at Purdue University.