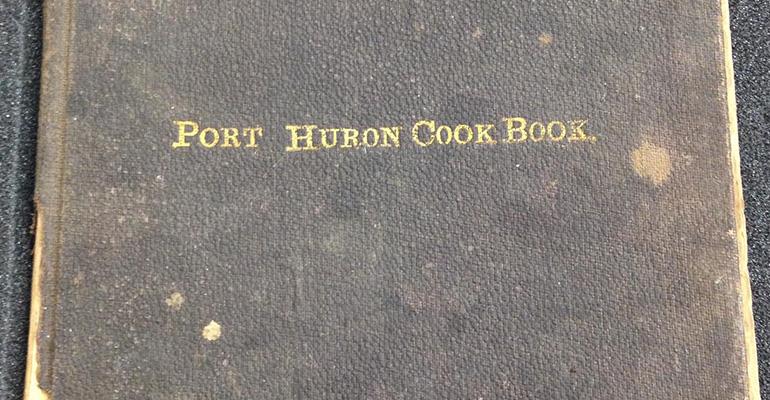 Digging up a secret food history on campus

Before Michigan State’s On-The-Go food truck took a detour back in time with Throwback Thursdays and Flashback Fridays featuring food from the 1860s, intensive research into the foodways of the past on campus made this limited time offer (with the emphasis on “time”) possible.

Strangely enough, Michigan State University’s (MSU) journey into historic foodways started in an outhouse. The brick-lined “privy,” as it was called back in the 1800s, was discovered in an excavation near the MSU Museum in 2015. It turns out, folks would throw leftover food and also random garbage and clutter into the privies at the time. An assortment of artifacts was discovered by MSU’s Campus Archaeology Program team, including old dolls, broken dishes and bottles, fish bones and preserved raspberry seeds. PORTAL TO THE PAST: This cookbook, published in 1876, is a collection of recipes compiled by the Ladies of the first Baptist Church in Port Huron, Mich. The book’s subtitle is “What the Baptist Brethren Eat, and How the Sisters Serve It.”

Campus archaeologist Lisa Bright came up with the idea to turn these finds—along with archival research into campus menus and cookbooks—into a real-life meal. That meal happened last year, and this spring, the foodservice team at MSU turned the dishes into a series of flashback/throwback events with the food truck.

Kooiman, currently preparing to defend her dissertation, answered some questions about time travel made possible through food, including some fascinating tidbits and fun facts.

FM: What can we learn about the people who lived in the 1860s on campus by what they ate, and since it’s food that we can try in the present day, does that intensify history in a way?

Kooiman: I think we can learn a lot about other people by eating what they ate. Consuming the same foods that our predecessors ate can really help you connect with them in a sensory way by experiencing the same tastes, textures and flavors they did. You may find you related to them by a shared admiration for croquettes and ginger cake, or you may wonder why exactly they ate something as unsavory as canned oysters…differences that may spur you to learn a little bit more about the social, economic and ideological circumstances of the past that influenced certain culinary decisions and trends. The codfish balls recipe, from the Port Huron Cook Book, inspired new shareable appetizers for the present-day food truck. The chow chow relish from the past is making a comeback, as Executive Chef Kurt Kwiatkowski has added it to the food truck lineup.

FM: What similarities did you find between the current community of eaters on the MSU campus and their predecessors in the 19th century?

Kooiman: The basic foods consumed on early campus were generally the same as those common today, except for the ways in which they were prepared. They boiled a lot of their meat and vegetables, which we tend to avoid today since it leaves them rather bland. However, they ate pork, beef, chicken, potatoes, carrots, berries, etc…items that are still staples of the Midwestern diet today. And in the 19th century, every part of the animal was used.

Kooiman: Except, it’s all things most of us wouldn’t touch today. I found historic recipes for roasted calf’s head, calf’s head soup, calf’s foot jelly, veal brains, beef tongue, liver, “brain balls.” However, we did have beef tongue at our historic luncheon last year and it was actually delicious!

FM: What other things were you surprised by in your research into the old cookbooks and menus?

Kooiman: One of the most surprising things we learned from our research about historic campus foodways was the affinity for oysters in the 1800s. The early boarding [dining] hall on campus purchased large quantities of them for special occasions, like Thanksgiving and commencement. Of course, at the time, they wouldn’t have been able to get fresh ones in Michigan, so they were canned. When we hosted the historic luncheon with culinary services, we tried canned oysters and they were terrible. Don’t worry—they didn’t make the cut for the food truck! But oysters were a huge craze in the U.S. in the early 20th century, and then they were over-exploited and became hard to find. The Lansing Cook-Book contained the potato croquette recipe, one of the most popular throwback food truck items. The Jubilee Cook Book from the Ladies’ Aid Society of the Methodist Episcopal Church of Ann Arbor, Mich., was published in 1887.

FM: What was your favorite bite that came from this project?

Kooiman: I am a fan of the potato croquettes that we served at the original historic luncheon, and then served at the first two food truck events. What’s not to love about deep-fried mashed potato balls? The interesting thing about them is that an 1890s cookbook from Lansing had a whole section devoted to croquettes, so they really were a locally loved treat. OYSTER MANIA: In her research, MSU food archaeologist Susan Kooiman found that canned oysters were the base for countless recipes, as seen here in the 1887 Jubilee Cook Book.