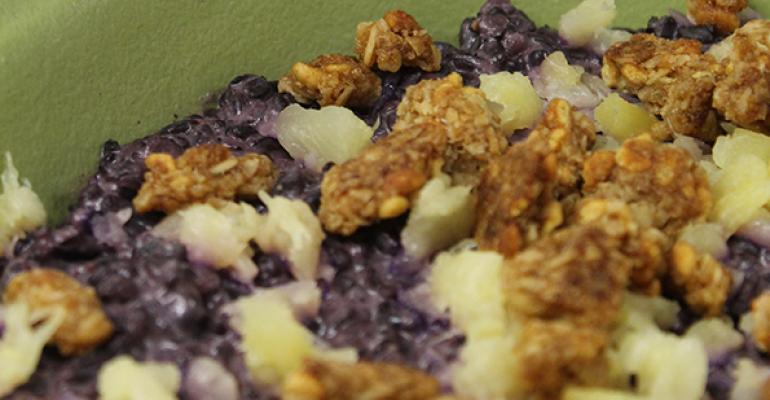 Dining Hall as a Classroom: A Whole-Grain Learning Experience

Marketing students from Lebanon Valley College (LVC), in Annville, Pa., recently teamed up with the school’s foodservice provider, Metz Culinary Management, to demonstrate new  whole-grain recipes in a cooking expo and measure the results of getting students to eat these healthier items.

Ryan McNulty, Metz’s director of culinary development, was on the scene for the cooking expo, which took place in LVC’s main dining hall following the dinner rush, and included demonstrations and taste tests.

McNulty has found that bolder is better when it comes to successfully introducing whole grains.

“If students just taste a grain by itself, it’s not very pleasing,” he says. So he conjured up such whole-grain stunners like Forbidden Black Rice Pudding (See full recipe >>), Basil-Infused Quinoa and Vegetarian Farro Stew.

The expo was part of the EAT (engage, analyze, transform) program at LVC, which incorporates classroom initiatives with cooking demos, discussions and research projects, allowing students to test their nutritional marketing ideas in a real-life setting.

“Second-year students have been working on a whole-grains project, researching and measuring the outcomes (the number of whole-grain dishes served, for example). So this is a real student-driven, research-based program,” says Bill Allman, general manager with Metz at LVC. “The program has been so successful that the professor teaching the class went to the dean so the students could get class credit for participating.”

“The program aligns with the institutional goals of the college: critical thinking, ethical reasoning, respect for diversity and commitment to sustainability,” Allman adds.

Some marketing truths about whole grains uncovered by the students include the power of a name or label, Allman adds.

“When we label a grain salad as ‘whole grain,’ that items sells about three times better than when we had labeled it ‘vegetarian,’” he says.

Naming individual dishes with cool monikers has been proven to boost popularity, and that’s why McNulty emphasized the fact that black rice is often called “forbidden rice.”

According to Allman, the program has been gaining momentum and attendees were engaged during the expo. The students are continuing to track the popularity of whole grains, working toward their end-of-year projects. Allman hopes this program will become a pilot for similar programs at other Metz college and university accounts.