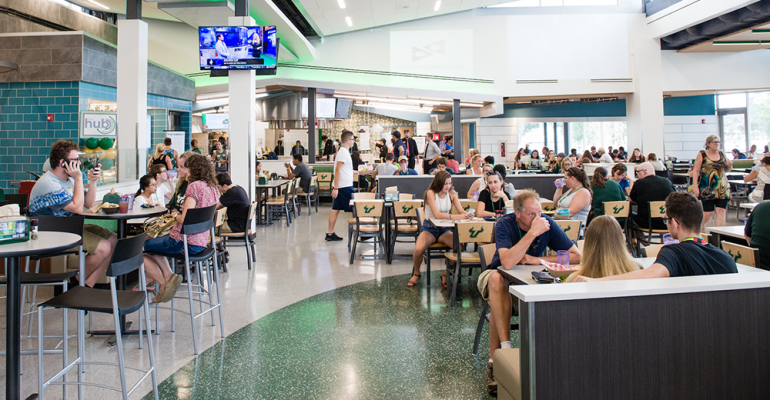 A spectacular new dining hall and an innovative restaurant cluster highlight recent upgrades at the University of South Florida.

The campus dining program at the University of South Florida (USF) in Tampa has been upping its game considerably over the past year, not least with the openings of two new multiconcept venues.

First off the mark was the Hub, a brand-new residential dining hall situated in a new on-campus community called The Village, which opened at the start of the 2017-2018 school year. The Hub features nine creative station concepts in an all-you-care-to-eat format, including a unit of dining services provider Aramark’s True Balance concept, which offers dishes free of the seven most common food allergens.

Then, this August saw the opening of Argos Exchange, a dining cluster that emphasizes variety with a couple of concepts that rotate menus to keep things fresh for customers over the long school year, plus a unit of a local coffee roaster, Bay Coffee & Tea Co.

“There is now a lot of excitement on the USF campus around the dining program,” offers David Disalvo, the resident district manager for Aramark who oversees operations at USF. “It is attached to and in concert with changes happening broadly at the university.” 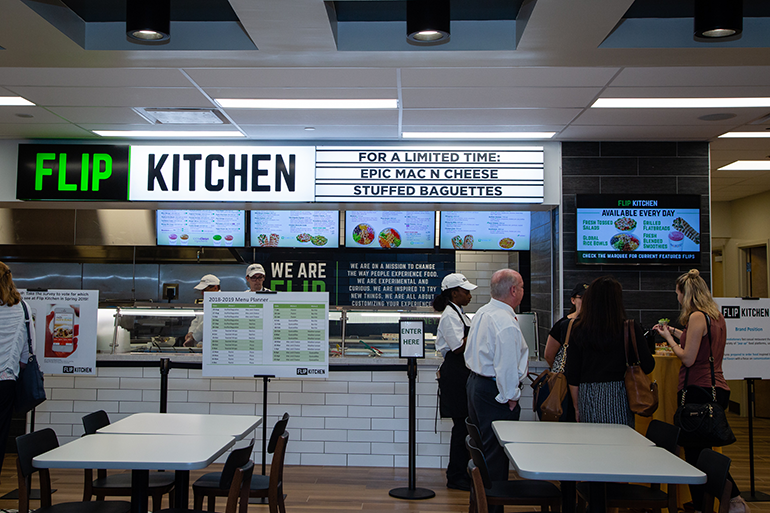 Flip Kitchen in the new Argos Exchange complex offers a core menu supplemented by a rotation of featured flip menus such as Gourmet Macaroni and Cheese, Artisan Pizzas and Stuffed Baguettes.

He cites The Village, part of a public/private development, as a primary reason for the excitement. “It’s got a full set of amenities for students within that neighborhood, which is directly on campus.”

The Village is a brand-new complex incorporating five resident halls, plus the Hub and a recreation center called The Fit, which includes an outdoor pool and a full complement of exercise machines. The complex, part of an ongoing program to upgrade campus facilities overall, also includes a second Starbucks unit for the campus and a unit of the popular BurgerFi chain as retail options. Both debuted this fall, along with a new Einstein’s Bagels/Caribou Coffee combo unit elsewhere on the campus.

Technically, the Hub supplants an older residential dining facility in another part of the campus, “but it’s so different and so new and so state-of-the-art that it’s almost strange to think of it as a replacement,” Disalvo says. “It’s more of an accumulation of learnings, [as is] Argos.”

Those “learnings” are the fruit of Aramark research into college dining trends, which led to the development of the kinds of concepts that are represented by the new UFS facilities.

“We’ve been collecting a lot of information on dietary preferences, the way students choose to engage with the dining hall, mobile infrastructure, programming decisions and technology at large,” Disalvo explains. “These all kind of have a home at the Hub and within Argos Exchange, and they are intended to complement each other on campus.”

The concepts were developed by Aramark but the branding and naming of the stations (other than True Balance) are unique to USF to better integrate it into the campus community. 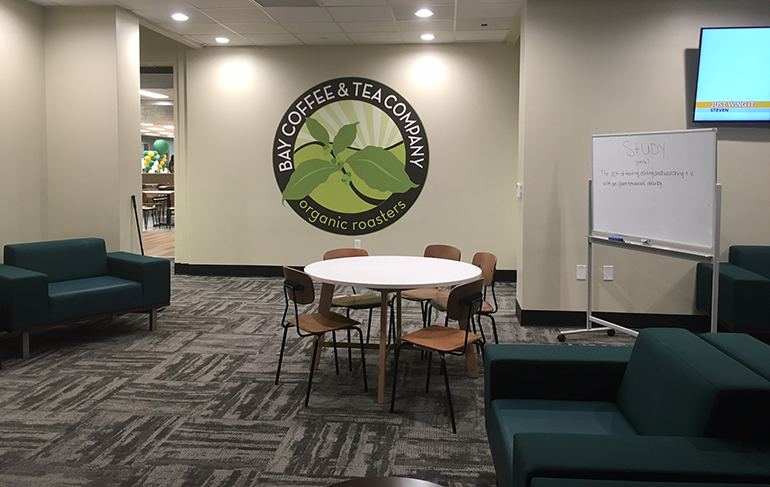 Bay Coffee & Tea Co. is a local coffee roaster that now has a unit in Argos and is the outlet for overnight foodservice.

Unusually, the Hub is a 24-hour operation during the week, with a limited-menu late-night service conducted from a portion of the venue that is aesthetically partitioned off from the larger space. In fact, the entire venue was designed in a way (by consultant organization Tipton Associates) to be able to expand or collapse stations based on peak operating hours.

“Whether you’re serving 4,000 or 400, you want the experience to be upheld from a quality standpoint,” Disalvo comments.

The Hub also transforms throughout the day by utilizing color-changing LED clouds to create a dining experience that corresponds with events taking place in the facility, while the ambient music is controlled by student votes through the Rockbot app.

Disalvo hesitates to characterize Argos, which is located just south of The Village complex, as simply a “retail” dining outlet, though it does offer a la carte pricing, not all-you-care-to-eat.

Argos, located in a renovated building that dates from the mid-20th century, is in a 24-hour facility to which students can come to study, collaborate or socialize at any time. It offers both onsite and mobile ordering options for diners.

The dining options in the complex include Flip Kitchen and Restaurant Rotation, the latter a pop-up station that will rotate Aramark brands on a monthly basis based on student votes. The kickoff concept was Social Toast, which offers a breakfast for dinner menu featuring baked French toast, avocado smash bowls and acai bowls. Future possibilities include barbecue, Mediterranean and Italian menu concepts along with nearly a dozen others.

Flip Kitchen is a fast-casual concept that is the product of is a partnership with Freshens, and the Argos unit is the first in the country to open. It features two rotating menu “flips,” with fare such as tossed salads, smoothies, grilled flatbreads and globally inspired rice bowls on the core menu, supplemented by a rotation of featured flip menus such as Gourmet Macaroni and Cheese, Artisan Pizzas and Stuffed Baguettes.

Round-the-clock food options are available in Argos through the bullsXpress outlet that is part of the Bay Coffee & Tea station. A kiosk order platform allows customers to order at any time of the night from a late-night menu that offers freshly made dishes.

Argos also has a demonstration kitchen area that is one of the fruits of the “learnings” Disalvo alluded to.

USF Tampa (there are also satellite campuses in St. Petersburg and Sarasota) has an enrollment of about 24,400 full-time undergraduates and about 10,000 full- and part-time graduates. About 6,600 students are residential meal plan holders.

One On One: Lehigh University Sodexo Executive Chef John Hynes says yes to flavor, no to drama
May 14, 2021

48 College Foodservice Heroes who made a difference over the past year
May 13, 2021