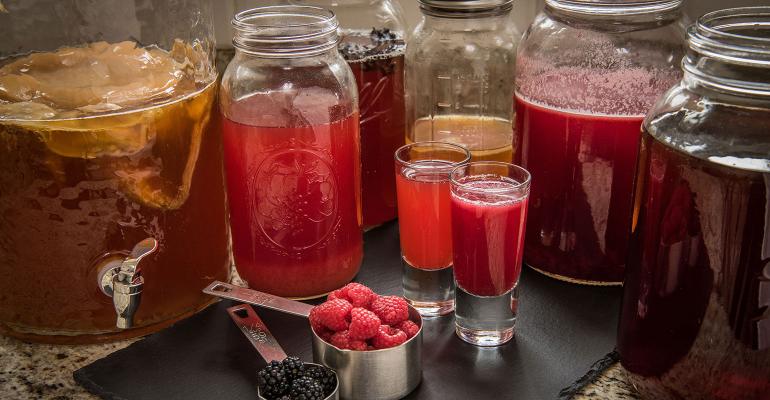 Photos: Stanford Dining
Kombucha has been trickling into the mainstream beverage world now for the past few years, gaining fans because of its reported wellness-boosting properties. SCOBY (symbiotic colony of bacteria and yeast) is what makes the fermented bubbly tea kombucha special.
News & Trends>Colleges & Universities

A sip of kombucha—a fermented probiotic tea—can seem to be alive. The sensation is partly because it’s slightly carbonated, but the fact is, this bubbly drink contains an entire microscopic city of life, the SCOBY (symbiotic colony of bacteria and yeast). Sound a little too out there? Kombucha is a delicious, trendy beverage…it may have hippie roots, but its appeal quenches today’s customers’ thirst for food that does more. Executive Chef Erica Holland-Toll first got interested in kombucha during her own college days.

The Flavor Lab is a place for testing menu items, equipment and programs. And it’s become a meeting of the minds for chefs, nutritionists and sustainable food program managers to uncover the potential of food.

Holland-Toll’s first experience with kombucha came when she first left for college and began to discover natural beauty products, herbs and “doing things from scratch,” she recalls. “I’m pretty sure I read about kombucha in one of Jeanne Rose’s herbal books.”

On her first Christmas break home from college, “I was talking so much about kombucha that a friend of my mom’s gave me my first SCOBY, the symbiotic culture of bacteria and yeast that’s used to create kombucha,” Holland-Toll says. “I was excited to take the SCOBY back to school and make my own, even though my roommates thought I was going to kill us all with the weird, mushroom looking thing.”

Luckily, everyone survived, but the original SCOBY didn’t make it when Holland-Toll later went to culinary school. Years later, her interest in making kombucha from scratch bubbled up again, just in time to share her knowledge at the Flavor Lab and through Stanford Dining’s Tasting Table program.

“Kombucha and fermentation in general are trendy again, so students have expressed interest,” Holland-Toll says, adding that kombucha as a beverage option ties into Stanford Dining’s commitment to the Menus of Change Principals , in particular the tenet that states “substantially reduce sugary beverages.”

“We’re always looking at healthier alternatives, and kombucha is a unique and delicious alternative to sugary drinks,” she says. Right now, the housemade kombucha is served in glass dispensers in Stanford’s dining halls.

So how do you make kombucha?

“It’s essentially fermented sweet tea,” Holland-Toll explains. “You start every batch with a base of strong, chilled black tea—it must be caffeinated—and sugar, plus around 12 percent of your previous kombucha as a ‘starter.’ Then, you add your SCOBY and give it time.”

After making some bubbly batches in the lab, Holland-Toll was able to share the experience (and get feedback) from students though the Tasting Table program in Arrillaga Family Dining Commons that showcases new creations from the Flavor Lab.

“When something like kombucha is created in the Flavor Lab, we take it to the Tasting Table so students can try it,” she says.

Students have tried some of the different flavors Holland-Toll has been experimenting with, including vanilla (tastes like cream soda) and peach (soft and bruised fruits work great in kombucha).

The peaches touch on the sustainability piece of the kombucha project, as Stanford partnered with an heirloom peach farm in California for the #eatsmallfruit campaign, which rescues tiny peaches (about the size of an apricot) because most stores won’t sell them.

“But they’re absolutely delicious and full of flavor,” Holland-Toll says. “We purchased 250 tiny peaches…they were too ripe or bruised to offer to students, but the flavor was so good I wanted to find another way to use them.”

So the peaches were crushed and became a kombucha flavor.

“After three days, the kombucha tasted like summer in a glass,” Holland-Toll says.

The Flavor Lab isn’t bottling the kombucha for now, but is looking to expand on the fermentation game. Last year at the R&DE Stanford Dining’s Women Chefs Collaborative event, a fermentation class was held.

“We invited a fermentation expert to come and teach us about the many different kinds of fermented beverages, such as kombucha, jun and kefir,” Holland-Toll says. “They’re all relatively easy to make; they just need a lot of that super-valuable resource: time!”