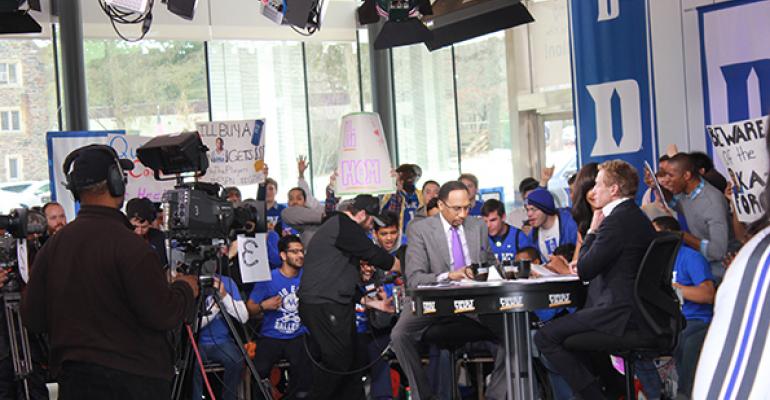 The cameras rolled as ESPN’s “First Take” crew of Cari Champion, Stephen A. Smith and Skip Bayless discussed that evening’s much-anticipated matchup of arch rivals Duke University and the University of North Carolina men’s basketball teams on the morning of Feb. 18. The site of the “First Take” broadcast: Penn Pavilion, a popular dining outlet on the Duke campus—near where the game would take place—that serves an average of 1,500 to 1,800 customers daily.

Now, it’s not unusual for ESPN to set up shop on a campus for its broadcasts, and Duke is a frequent stop during basketball season given the prominence of its program.

“But this was to my knowledge the first time that they used a dining facility to host an ESPN event, and this was the first time that “First Take” was on campus here,” says Robert Coffey, director of Duke Dining. (Editor’s Note: “First Take” is a live two-hour program that airs 10 a.m. to noon Monday through Friday, featuring a panel and guests that discuss sports news and events of the day.)

Penn was opened in fall 2013 to serve initially as a temporary dining facility while the school’s West Union complex was renovated. However, it’s ultimate function is to be a major campus meeting and event space, so the “First Take” activities gave the place a chance to preview that role, Coffey says.

“Of course we knew it was going to be challenging,” he adds, “as it would be disruptive to set up a live TV program in the middle of a dining facility that is kind of noisy and very busy.”

The first feelers about the broadcast came in January. “When the request first came through, I though, ‘Oh, my! How are we going to do this?’” Coffey laughs. “But then we set up a meeting with ESPN and we found that they run a well-oiled machine and they made things very easy.”

“First Take” production people visited the campus just before the Super Bowl Feb. 1st. “We had a quick meeting where we measured off and paced off and talked about how we would set everything up and how the day would probably flow,” Coffey recalls.

That was followed by a lot of back and forth about logistics as the ESPN production involves a lot of equipment that must be delivered by truck, and Penn’s main access is by a road that is currently restricted by the construction happening at West Union, plus it’s routinely clogged with delivery vehicles that supply Penn.

Other challenges included the need to accommodate all the utility requirements and the cables that run hither and yon. The production crew setting up the broadcast numbered up to 50 individuals, Coffey estimates, and that didn’t include the executives and on-air personalities and their staffs.

Duke Dining provided catering for both the set up/support crews and the “green room” where the “First Take” personalities prepared and took breaks.

The Show Must Go On

Logistically, Coffey’s main challenge was to ensure that Penn remained open and accessible to customers of its primary function, which is serving food. The broadcast set was placed in the midst of the seating area to provide interactivity, which displacing some seating. However, Coffey was able to rearrange the space temporarily so that seating capacity was unaffected.

The disruption was basically a 24-hour affair. While the actual “First Take” broadcast takes place from 10 in the morning to noon, set up took much longer.

The previous day, after the venue finished its lunch rush in mid-afternoon, tables from the designated area were cleared by dining staff, and ESPN took over.

“Some students coming in for dinner were asking, ‘Hey, what’s going on?’ so that helped build excitement,” Coffey says. “The ESPN crew worked all night and we were up pretty late too, but when you came in the next morning, the transformation was unbelievable with this live stage they had created in just a few hours.”

The pre-broadcast time was filled with the testing of equipment and with preparing for the show.

“[The ESPN crew] talked to the students who showed up about what was going to happen, what guests were coming on and what it takes to put the whole thing on,” Coffey explains. “It was very educational and the students had a lot of fun with it.”

All the food stations remained open, serving both their regular menus plus some sports concessions-themed “tailgate specials” to align with the prevailing mood. The special menu items were favorites that are already served at campus athletic events.

Coffey had prepared for the rush by assigning extra dining staff but, unfortunately, weather hampered some assigned staff from making it in, so management stepped in to fill gaps, and Coffey is quick to praise his entire team for handling a high-pressure situation with aplomb.

“We’re a well-oiled machine too!” he says proudly.

There were certainly plenty of potential customers on hand as Penn was jammed with students all morning before and during the broadcast. However, Coffey wasn’t sure the day after what the final counts were as he hadn’t had a chance to check the reports.

“The place was packed, but I’m not sure yet if that translated to extra sales or not,” he laughs. However, he is quick to add, the exposure Penn got on campus from the event made it more than worthwhile.

“For some students, this may have been their first time in here, so at least they got to see it and it might bring them back,” he says.

Tear down was much quicker than set up.

“After the broadcast wrapped, the equipment guys had that whole thing down in the matter of half an hour, and we were moving the tables back to their regular places,” Coffey says. “We were all ready and back to normal in time for dinner.”

After all, the show must go on…