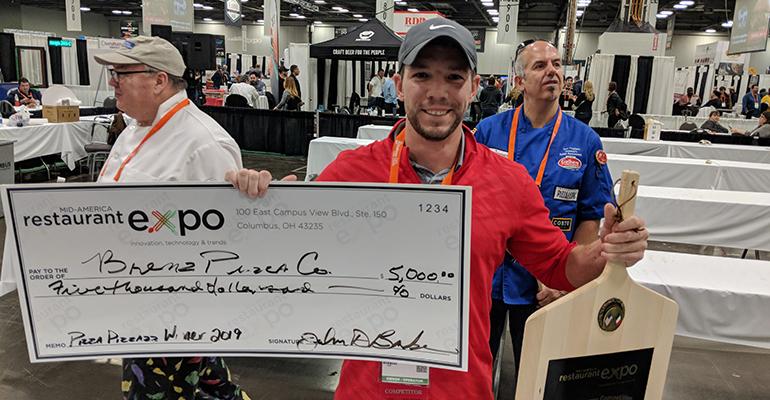 Kyle Rosch, director of operations for Il Forno, a concept within Duke University’s Brodhead Center, a food hall on Duke’s west campus, has studied pizza all over the world and competed in some of pizza’s most heated battles. Recently, he kept his streak going at the annual Pizza Pizzazz competition in Columbus, Ohio, winning his third Best in the Midwest title, beating 45 pizza makers in the prestigious pizza contest, which was emceed by “Iron Chef America” judge Mario Rizzotti.

Rosch is one of the local vendors that make up Duke’s spectacular food hall, in charge of the Il Forno pizza concept and another concept, Saison. He’s also director of operations for Enzo’s Pizza Co. of Durham, N.C., and Brenz Pizza of Chapel Hill, N.C., Knoxville, Tenn., and Columbus, Ohio. At Duke, Il Forno can operate at speeds of up to 200 pph (pizzas per hour).

Rosch, who developed his skill through practical experience making pizza, is from the Columbus area, something he says gives him an edge in the Midwestern pizza game, especially in terms of picking combinations of flavors that hit home in such a personal food.

“I come from less of a refined palate and more from ‘What are people going to want to order on their pizza?’” he says. “Pizza is a very personal thing for people. You grow up, you have Friday-night pizza with your family and you have Angie’s down the street and in your head, you have to think that’s what pizza should be.”

We asked Rosch to break down the perfect pizza into components: dough, sauce and toppings.

First off, let’s acknowledge that “dough is super complex,” Rosch says. “There’s millions of ways to do it and that’s the fun part.”

Pizza chefs are definitely having fun with fermentation, dough add-ins and more. But for a big operation like Il Forno at Duke and Rosch’s other pizza businesses, uniformity in dough trumps heirloom sourdough starters.

“A one-shot pizzeria can have a starter [yeast mixture] that you feed and name it like a little baby and it really creates some interesting flavors,” Rosch says. 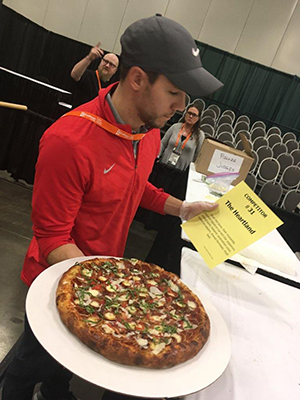 But that doesn’t mean there’s not an art to the dough, even in big production. Just using a good yeast can be a differentiator.

“The yeast gives it that tang and that bite and that may separate you from some guy using the same flour,” Rosch says. “Yeast, time and temperature are the main factors for manipulating dough.”

“When opening Il Forno we considered using a different dough [than Enzo’s] and we went through testing with 20 people trying it, and we found out that the Enzo’s dough would work best,” he says.

Pizza dough’s flavor and texture (determining the style of pizza) depends largely on time and temperature, Rosch says. The combination gas-woodfire oven at Enzo’s can get very hot, but with a minimum of around 800°F for Neapolitan-style thin-crust pizza, which uses double-zero (very finely ground) flour, the Duke ovens just didn’t get hot enough.

At Enzo’s, the conveyor-style pizza ovens are usually around 480°F, more suited to New York-style crust, which has more of a chew to it, and tends to appeal to more people than the cracker-thin Neapolitan style anyway, Rosch has found.

“Il Forno leans toward Neapolitan style, but I like to keep it kind of traditional but familiar, instead of going all the way to one side of the spectrum,” he says. “With Neapolitan style, some people don’t understand and think it’s burned. We find a happy medium.”

So, while the Duke pizza ovens can get a little hotter than most with the addition of wood to gas heat, the same type of dough works for both.

“New York-style crust finds a happy medium of high-gluten flour and a hydration level of 65%. That affects the flour and how it breaks down the elasticity of the dough,” Rosch says. “That’s the chew or the pull…the sensation of eating a slice of New York pizza.”

How hot can pizza ovens get, by the way?

“I’ve seen ovens getting close to 1,000°F,” Rosch says. “For competitions in Italy, you only have a minute and a half to cook your pizza or you start getting docked points!” 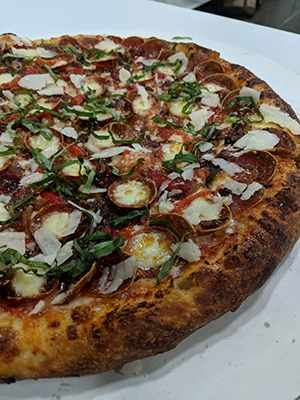 When preparing the dough, a stand mixer is key because “otherwise your hands will get too tired” in kneading it out, Rosch says, adding that pizza problems at campus operations can often be traced back to the dough.

He uses cold fermentation (dough portioned into balls immediately and chilled) vs. bulk fermentation (letting the dough sit on a counter in one big dough ball) and has found that a lower temperature over a longer period of time (up to 96 hours) gives dough enough time to rise and for the yeast to develop flavor and contribute to the brown bubbles and dough pockets that make a great crust.

A great tip for emergency situations “if the dough didn’t rise or we’re out of dough,” Rosch says, is to manipulate the temperature.

“Instead of 62°F water, we can do 82°F water and instead of refrigeration we’ll let it sit on the counter for three hours,” Rosch says. “The longer the temperature of the dough stays warm, the faster it’ll activate, although the slower way has worked better for us. And from a management standpoint, I’m setting myself up for two days ahead.”

While the dough is the same at all of Rosch’s pizza concept, the toppings and sauces vary. At Il Forno, which leans more towards Italian-style pizza, the sauce is a simple, fresh Pomodoro, not a cooked-down sauce. Good canned tomatoes from California are Rosch’s preference over San Marzano tomatoes, which have recently gotten negative attention about false labeling.

“The old pizza sauce method is cooking it low and slow in a pot for hours to develop flavors, but then you’re just turning it into a pasta sauce,” Rosch says. “So we don’t actually cook down any of our pizza sauce.”

Instead, dry and fresh herbs plus a bit of sugar are bloomed in a bit of water on a skillet to bring out the flavors in a slow boil, then added to the tomato sauce.

“If you’re making a 10-gallon batch, I’m using a cup of water…it’s only a way to moisturize the dry ingredients, not to thin out the sauce,” Rosch adds.

For the Pizza Pizzazz competition, Rosch focused on taking great topping ingredients and making them more interesting. The roasted red peppers were marinated in red wine vinegar, oil and basil, “almost a pasta salad dressing,” Rosch says, another flavor that draws on his Midwestern background.

The onions, caramelized with sweet balsamic vinegar “paired great with the spicy pepperoni and also the bacon,” Rosch says.

While Rosch is sticking to New York-style crust veering into Neapolitan for his pizza business, he’s also keeping an eye on a hot pizza trend: the Detroit pizza, known for its square bubbly edges. “It’s definitely more labor-intensive, since you have to press it out inside the pan,” he says, adding that he’ll probably start tinkering with that soon enough.