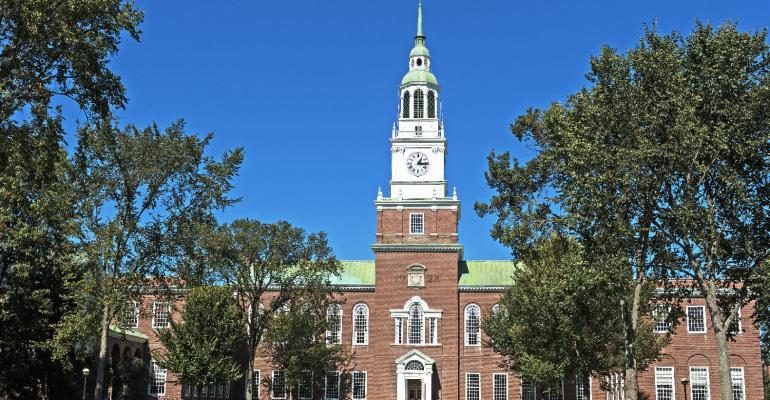 jmoor17 / iStock / Getty Images Plus
Dartmouth College eliminated late-night snack programs over concerns of how to sanitize the locations as well as concerns about students congregating.
News & Trends>Colleges & Universities

This fall, about 1,800 of Dartmouth College’s 5,000 students returned to the campus in Hanover, N.H. Every student was placed in a single dorm room, and upon arrival had to quarantine in their rooms until their coronavirus tests came back. “They arrived in waves of 400 at a time,” says Jon Plodzik, Dartmouth’s dining director, “and we had to deliver meals to each student over their almost weeklong quarantine.”

Plodzik and his team developed a two-week cycle that included sandwiches and salads for lunch, and hot items such as chicken piccata for dinner, accompanied by breakfast items for the next morning. “We tried to offer what we think of as traditional fare here at Dartmouth like our popular General Tso's chicken,” says Plodzik. They partnered with athletics to use the school’s golf carts to deliver the meals while campus maintenance staff pitched in to help with delivery. 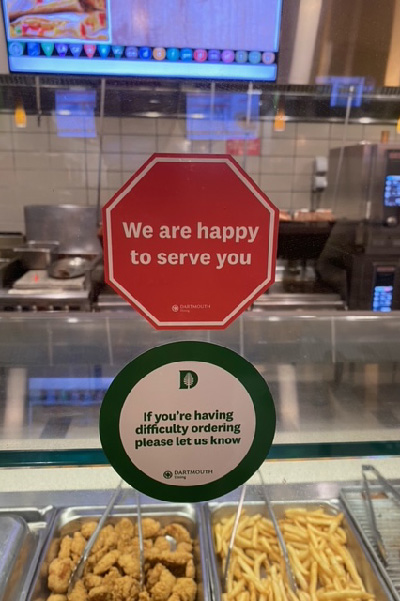 Photo: “Students told us they don't like to pass close by people that are dining,” Jon Plodzik says, “so we've created separate corridors for them to exit the building.” Students can also use an app to order food and pick it up at a station that is in a separate area away from the dining and servery.

“It was really great to see the community effort to serve the students,” he says. But not everything went as smoothly. They asked students to fill out surveys about food preferences and potential allergens prior to arrival. What they discovered was 84 allergens and over 370 students who identified as having concerns about eating a standard meal. Ultimately, they offered a vegan/vegetarian option and another of standard fare during the quarantine delivery foodservice. “Then for almost 400 students, we tweaked the standard fare to customize to their needs, subbing out mushrooms, for example,” he says. “It was quite an undertaking.”

This delivery model will be repeated each semester that students travel home and return to campus, and any time a student must quarantine or self-isolate due to a positive COVID-19 test or potential exposure.

With the initial quarantine period now ended, on-campus students can get their own meals at Class of 1953 Commons, the school’s primary dining venue for undergraduate students, or three other campus cafes. They eliminated late-night snack programs over concerns of how to sanitize the locations as well as concerns about students congregating. They also closed one of the larger campus cafes to use staff in the cafeteria, where the new service model requires much more staff.

“We spent a fair amount of money on Plexiglas at different stations and simplified menus,” says Plodzik. “We cut down on the amount of customization because we don’t want any backup in the servery line and have to ensure six feet social distancing. I quickly realized students are like magnets. As soon as they get near each other, they immediately connect.” 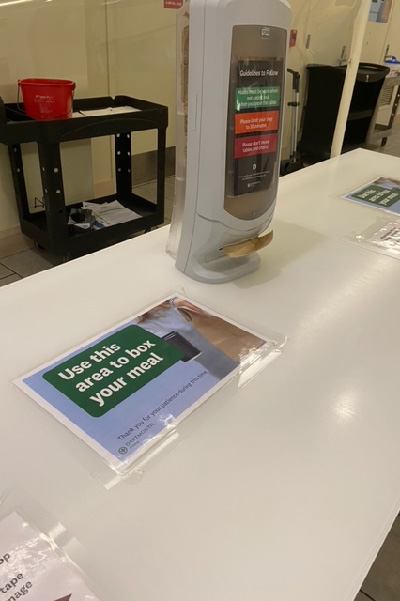 Photo: To maximize safety, staff will not touch students to-go containers so instead, they receive plates of food at various stations and then visit a transfer station to box up their meals.

Instead of the typical level of customization, the dining team offered a compromise. “Now we start with say a composed salad of greens, tomatoes, carrots and onions as a base and then students choose the other toppings,” he explains. “At the bagel station, we're toasting bagels for them, spreading the cream cheese. We get the cereal out of the dispensers for you and hand it out to students underneath this Plexiglas barrier.” All takeout orders can only be served in Green2Go reusable containers, which the students buy for $10 and that can be filled with an all-you-care-to-eat model. Used containers can be returned to any of the dining venues.

Plodzik says that the new service model is using so much extra staff that in addition to absorbing personnel from another campus location, they are also busing in staff from an hour away twice a day through an employment agency.

Although the majority of orders are for takeout, which can be eaten elsewhere on campus or inside outdoor tents, the cafeteria is set up to seat 200, scaled down from its typical 1,200 capacity. In anticipation of bitter temperatures this winter, Plodzik is working to optimize indoor dining safety. “At the same time, I know that students want to connect so badly so I’ve installed connecting tables, in which they are still six feet apart, but they can face and talk to each other.”

Every day, Plodzik meets with his team to talk about what’s working well to stay agile in the face of unprecedented challenges. They experimented with staging the students inside and bringing them in in waves to get their food, but in the end decided to encourage lines to form outside, where transmission risk is lower, by placing menus and signage at appropriate points.

“One of the great surprises has been that the students are incredibly patient. They're so excited to be here,” says Plodzik. “I don't want this dining program to feel like you're visiting a prison. I want this to be a high point in their college life.”