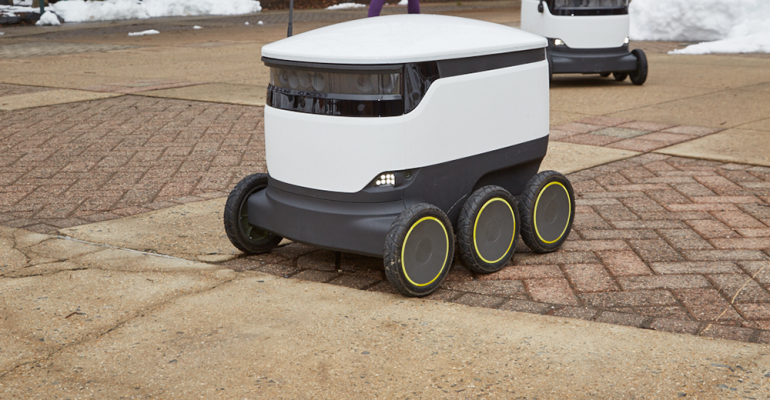 George Mason University in Fairfax, Va., has a very unique “first” to claim. The school has the first self-driving robot delivery service that is integrated with its campus dining plan. Launched in late January, the service currently boasts a fleet of 25 self-driving delivery robots that can cross all kinds of terrain in rain or snow to bring food and drink to the university’s 40,000 students, faculty and staff in just a few minutes.

“We're always looking at new and innovative ways to service our students and guests,” says Jeff McKinley, district manager for Sodexo, which manages the school’s foodservice program. “With its great engineering program, George Mason University is always on the cutting edge of new technology and innovation. With the campus layout and large sidewalks, it just has the right environment for the robots.”

Sodexo reached out to Starship Technologies, developer of the self-driving robots, last fall for a potential partnership. The black and white robots resemble small coolers with six wheels and a red flag on top for added visibility. They are outfitted with ultrasonic sensors, nine cameras, radar as well as GPS. The ultrasonic sensors create an imaginary bubble around the bot so that when an object or person enters that bubble, the robot instantly decides whether to stop or maneuver around it.

And while they can drive autonomously, they are also monitored by humans who can take over control at any time. For instance, when the robot doesn’t know what to do, the bot pings the human monitor who can then see the robot’s view from its camera and direct it accordingly. Additionally, if someone picks up the robot, it will sound an alarm to deter any “robot-napping.”

Having the fleet of smart robots on campus means that when students want food or drink delivered, they open up the Starship Deliveries app, drop a pin to their location and place their order with one of the participating dining locations. Currently the robots can make deliveries from the campus Starbucks, Blaze Pizza, Dunkin' Donuts and Second Stop, a Sodexo-branded campus grocery store. There’s a delivery charge of $1.99 per order, and students can use their Mason Money, their meal plan flex bucks, to pay. Those not on the meal plan can also pay with credit card through the app.

On the operations side, when an order is placed on the app, it comes up on a tablet in the dining location and the order is prepared. When ready, an employee known as a “robot runner” brings the order to the robot, which is locked with a unique code and sent out on delivery. Upon arrival, the recipient receives a text message containing a link to unlock the robot. Each robot can hold up to about three grocery bags or about twenty pounds and can fit a personal size (12-inch) pizza.

“We also partnered locally with the health department to make sure the robots properly maintain food temperature even though the delivery takes just minutes,” says McKinley. “We use insulated packaging and there are separate departments to keep salads cold and other food warm.”

Currently, the robot delivery service is available from 8 a.m. to 9 p.m. and McKinley says that as they add more dining locations, some of which are open 24 hours, that service could run around the clock. To facilitate the program, McKinley says he’s hired about 10 new staff members as robot runners, which has turned out to be a coveted campus job. “Who doesn’t want to be a robot runner? It’s just cool,” he says.

McKinley adds that they also had to find a place for these robots to “live” when not on a delivery. “We just installed these robot ‘dog houses’ strategically around campus,” he says. “When their batteries get low, the robots drive in and their battery is automatically replaced.”

While the original mission was to offer students more work/life balance by delivering food to wherever they are on campus quickly, McKinley has witnessed some surprising outcomes. “It's been fun to watch the students interact with the robots,” he says. “We're seeing notes left on them or in their little compartments to see if it'll go to a different order and stuff like that. The cool factor is great, but is really about the innovation and the interaction of a campus that is really driving this.”