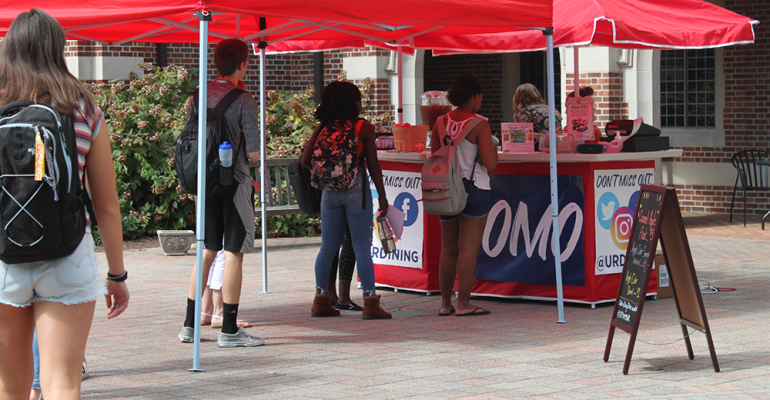 The University of Richmond’s dining team has sent out portable bars with light refreshments, lawn games and everything needed for a life-affirming break from routine.

What started as a low-cost, low-risk way to bring campus dining to underserved pockets of campus morphed into one chef’s commentary on modern collegiate life. Maya Vincelli, assistant director of retail operations at the University of Richmond, thinks today’s college students are missing out on the simple joy of playing during the day, what with jam-packed schedules and all the pressure that comes with college.

Enter the portable bar cart—“not that big of an investment,” Vincelli says—something that allows pop-up events to spring up anywhere (with a power hookup), offering a small menu, plus games and a ready-made “take a break and have fun” vibe, anywhere the FOMO bars, as they’re called, are set up.

In the Internet age, FOMO is an abbreviation for the average social media-consuming person’s “fear of missing out” on the seemingly endless excitement of someone else’s life. Vincelli sees this idea tying into the missing out that can happen when students get too caught up in the daily grind of grades, teachers and life in general.

“In the cafes, we’ve been working toward making everything more efficient and faster with the boom of grab-and-go and knowing students’ schedules are so crazy…we noticed how fast-paced everything is,” Vincelli says. “So, we wanted to create a fun atmosphere where people can just take a break.”

FOMO pop-up bars, which have been on the scene about half a dozen times so far, have featured a fall-theme, with apple cider mocktails (“In true Richmond, Va., fashion, it was about 98 degrees,” Vincelli laughs) and during summer, a “limeades from around the world” pop-up kept things chilled out. So far, the offerings have been beverage-centric, but food is on deck for future FOMO pop-ups.

The pop-ups can be found in far reaches of campus where there’s a lot of traffic during the day, but just no feasibility to build a dining hall, Vincelli says. So, when the FOMO bars are set up, it’s a change of pace and an available moment for students to relax and chill during a busy, otherwise monotonous/stressful day. The number of participants has varied from 30 to 90 so far.

“What does it mean to provide a calm space for a student? To provide space to have a little bit of fun and soak up the sunshine…I feel like we, as a culture, don’t appreciate that as much as we used to,” says Vincelli, who oversees dietetic interns and tends to look at dining from a holistic standpoint.

Fine tuning the FOMO bars has revealed that certain factors can make or break the pop-up. If the bar is set up too close to an existing dining venue, “students are already on their way [to the dining hall] and know what they want to get,” Vincelli says. “We want these to be located on a different part of their trip during the day.”

Also, even a cloudy day can prevent students from taking advantage. However, Vincelli has plans for a hot chocolate bar that should surely brighten up a winter day, she says. Other ideas include an avocado toast FOMO bar and a bone broth version, also perfect for the upcoming cozy season. Not something you want to miss out on.