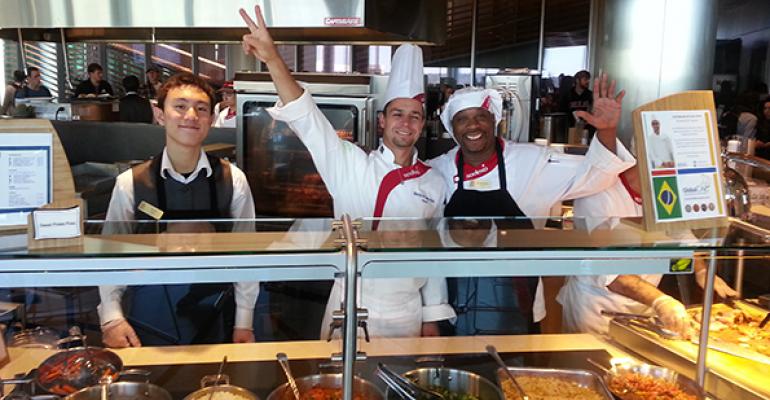 Global chef program at USC more than just a layover

The University of South Carolina’s new Global Café incorporates a semester-long visit from a chef and an international workforce.

Inviting chefs from all over the world to cook and teach is a great way for a dining program to expand its horizons and bring customers along for the ride. But what if the chef didn’t go home after only a few days? Sodexo’s team at the University of South Carolina (USC) has been exploring that option in an intense new global chef-in-residence program.

Global Café is a new concept inside the Darla Moore School of Business, a 251,891-square-foot building with 35 classrooms and 40 meeting rooms. Darla Moore is a top-ranked international graduate and business school, and since it serves such a diverse population, the global angle was a natural fit. The café, as its name suggests, features flavor profiles and culinary trends and traditions from around the globe.

The foodservice team decided to make the café even more authentic with the introduction last semester of a global chef-in-residence program. Every semester, a Sodexo international chef will stay on campus for six weeks of cooking, teaching and getting to know the campus community.

The first global chef was Marcelo de Castro Alves from Brazil, who stayed all spring semester. He introduced the campus to dishes from his home country: Shrimp Bobo (a coconut-milk stew based on African-South American fusion), top sirloin with a sea salt crust, a Brazilian-style chicken burger and grilled plantains, to name a few.

He also worked some fusion magic while on campus, creating a French dip-style sandwich but with Brazilian flavors and also a bruschetta “eye opener” with prosciutto, a fried egg and a mango glaze.

“We worked with our distributor to make sure Marcelo had all the ingredients he needed,” says Steffan Winbush, executive chef with Sodexo at USC, adding that de Castro Alves had fun exploring the culinary scene in the area, where trendy food cities like Asheville, N.C., and Charleston, S.C., are both within easy drives.

The role of the chef in residence included helping get the Global Café started as well. The café features a few different stations that focus on world cuisines from Brazil, South Africa, France and Greece.

Terry Lovelace, operations director for the Global Café, decided that since the café would be serving such a diverse population, the staffing should reflect that as well.

“It’s unique because of the workforce,” says Dave Sauers, resident district manager, with Sodexo at USC. “We set a really high bar. We’re serving an international business school and we wanted an international staff.”

Currently, it’s certainly a diverse workforce, with 17 different languages spoken daily in the kitchen. Sauers adds that he hopes to see this program replicated at other Sodexo accounts.