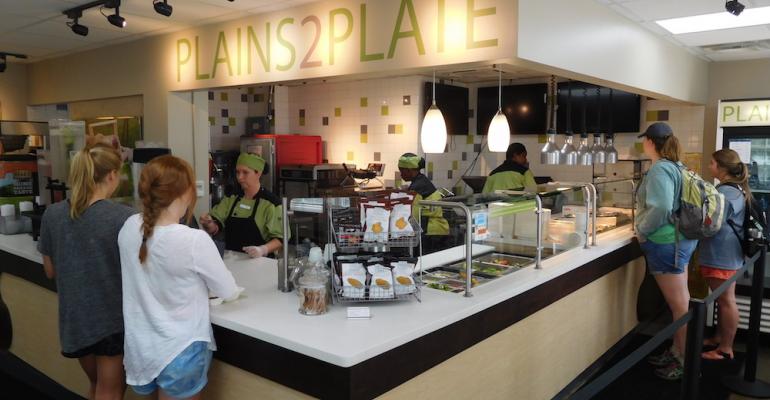 Plains2Plate offers selection where those avoiding gluten can get anything on the menu.

Awareness of gluten as a potentially harmful substance contained in many common foods has been one of the fastest growing trends in foodservice over the past several years. As a consequence, operators must increasingly be aware of potential customers suffering from some form of gluten intolerance as well as a growing number of those simply wishing to avoid gluten as a diet strategy.

Auburn University and its dining services provider Chartwells Higher Education have now taken the next step in satisfying this growing customer preference by opening what the school says is the first certified standalone gluten-free dining venue in the country.

Called Plains2Plate, the eatery is located in the heart of the school’s academic section and is open for breakfast and lunch daily with a menu of wraps, sandwiches, salads and entrees that are adjusted seasonally. Like the other retail locations on campus, it takes payment through the campus declining balance meal plan. Sales run around $2,500 to $3,000 a day.

Plains2Plate actually opened at the beginning of the 2015-2016 school year, says Glenn Loughridge, director of dining, but hasn’t been promoted as gluten-free certified until it received final approval from the Gluten-Free Food Services (GFFS), the industry’s recognized gluten-free certification body, in late March.

“We’ve been avoiding gluten for a while, but Chartwells wanted to be very careful about what we said until we had the lab certification,” he explains.

The space now occupied by Plains2Plate had previously been a farm-to-table station with a lot of fresh prep and local products, part of a partnership with the Real Food Challenge to try to bring more local options to campus, Loughridge says.

To expand the appeal of the venue, the station had added meatless dishes to appeal to vegetarian/vegan students and also some gluten-free choices. Eventually, the appeal of that latter category of specialty dishes became the primary driver.

“As we moved down the road, we started to see more and more students with celiac disease and food allergies,” Loughridge says, “and in general we felt like this was a step we could take to give those students a space where they could feel completely safe. That really had a huge impact on the student population at large.”

The eatery lent itself to conversion to a totally gluten-free outlet due to its small size and isolation, especially its dedicated prep kitchen.

To prepare for its new role, the space was completely scrubbed and cleaned of any gluten residue last summer, and surface samples strips were then sent off to be tested for any lingering presence of gluten.

“Once we passed that first test, we accelerated the process of getting the certification with GFFS,” Loughridge recalls. “It took quite a bit of time, but we finally got our certificate back here at the end of March after another lab testing. But we were already practicing gluten-free all year, so nothing really changed.”

The station’s original menu didn’t have to make wholesale changes from its original farm-to-table incarnation, rather gluten-free substitutes for the bread products were added. Ingredients remain locally sourced where possible.

“It really started with how we could be inclusive of some of these groups that are underserved on campus,” Loughridge summarizes, “and then it evolved to be this place where we felt like, wow, we could do something really special.”

Serving students with food allergies beyond the Big 8 and gluten
Feb 17, 2016