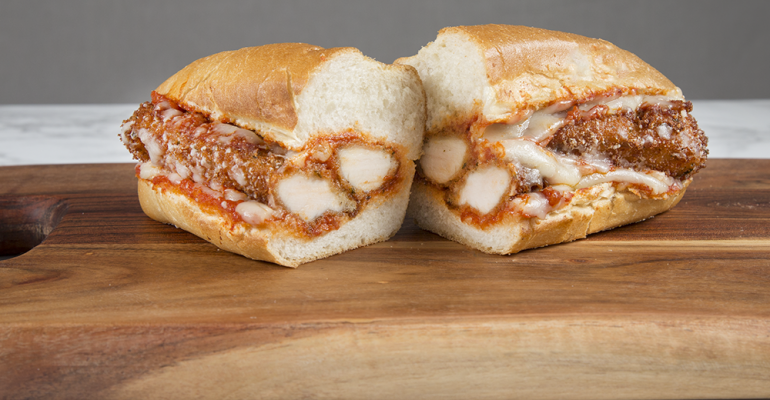 Good Uncle wants to be the new meal plan on campus

The app-based meal delivery service is disrupting college dining programs, one campus at a time.

College students have long had to make the trek back to mom’s kitchen when they were craving a tasty home-cooked meal. But now, those at select schools can turn to Good Uncle.

The app-based campus meal delivery program launched at Syracuse University last fall. By the time school starts next year, it will have expanded to 15 more colleges along the East Coast. And eventually, nationwide.

What makes it different from the many tech-driven food delivery options that are already out there? Students might order from GrubHub or Seamless once in a while when they’re in the mood for a treat and have some extra cash to spare. But Good Uncle is designed to be an affordable service that can be used to get wholesome meals every day. In short, it aims to be a cheaper, more delicious alternative to the traditional campus meal package. “We’re the anti-cafeteria plan,” says Co-founder and CEO Wiley Cerilli.

The bacon, egg and cheese bagel (left) and a dish featuring steak.

Cerilli acknowledges that some schools have taken significant steps to improve their dining options in recent years. But he believes that the majority of campus meal programs still fail to deliver the fresh-from-scratch, flavorful options that students want. This, despite the fact that most freshman and sophomores are forced to opt in. “A lot of these programs are restricted and can’t bring in new concepts because of contracts,” he says. “And any business that requires you to do something that you can’t get out of is basically saying that our value isn’t that great, that it’s not worth it.”

Like a conventional meal plan, Good Uncle allows students to sign up for a certain number of prepaid meals per week. But instead of heading to the cafeteria to eat, students order their meals through the Good Uncle app, and the food is delivered right to their dorm. (Other delivery locations, like the library, may also be available.) There are other big perks as well: Unused credits roll over from week to week, allowing students to get everything that they paid for. And Good Uncle will deliver fresh, hot meals until 3 a.m., long after most campus eateries have closed.

That sort of service might seem like it could get pretty pricey. But according to Cerilli, it costs students anywhere from 30 percent to 50 percent less than a campus meal plan. And there’s no delivery fee or order minimum. Good Uncle is able to keep prices down thanks to their mobile kitchens, which eliminate the need for major overhead costs like rent. “If we want to open in a market, we just drive a truck into the area,” Cerilli says. Smaller, more nimble operations mean that labor is cheaper too. And it’ll soon get even less expensive. Starting in September, some of Good Uncle’s food prep trucks will launch a robotic component to reduce kitchen staffing needs.

The lower operating costs also allow Good Uncle to invest in developing better menus with higher quality ingredients, Cerilli points out. Think healthy options like Mediterranean chicken grain bowls and kale, or strawberry salads with quinoa and walnuts. Though there are plenty of options for students craving something heartier as well—from gooey chicken Parm sandwiches to bacon, egg, and cheese bagels.

The Mediterranean chicken grain bowl (left) and a strawberry salad with quinoa and walnuts.

The company also partners with a handful of New York-based restaurants, including Joe’s Pizza, Ess-a-Bagel, Sticky’s Finger Joint and No. 7 Sub. But instead of picking up prepared food from the restaurants like GrubHub or Seamless, Good Uncle buys licensing rights to the restaurant brands’ recipes and recreates the meals in their own mobile kitchens. This gives customers fast, easy access to restaurant-quality meals they might not otherwise be able to get on campus. “Joe’s Pizza isn’t going to hand off their recipe to Aramark, for instance,” Cerilli says. “But we get their exact marinara sauce recipe, the cheese they use and we train in their kitchens.”

Good Uncle is already earning attention from some heavy hitters in the food industry. The backers of Uber and Blue Apron along with Sweetgreen and restaurateur Tom Colicchio are all enthusiastic investors. And despite its obvious competitor status to traditional meal plan providers, Cerilli sees Good Uncle as a good thing for customers. “It could motivate traditional dining programs to make better food and offer more flexible plans to capture the students who drop their plans when they become juniors or seniors,” he says. “There’s a big opportunity to service these students who want good food.”