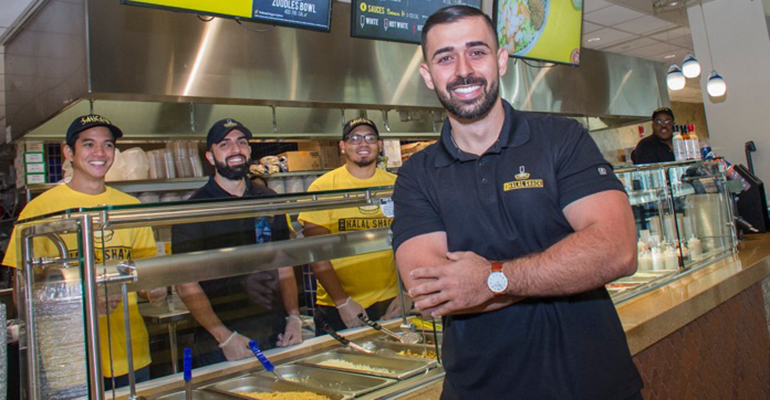 The Middle Eastern fast-casual concept Halal Shack first opened within SUNY Albany’s campus center in 2017. Halal Shack Founder Jamal Rasoully, a SUNY Albany alum, has overseen the concept as it serves between 500 and 1,500 students each day, with an average ticket time a speedy 30 seconds. Most of the staff is comprised of students, and shift leaders conduct daily audits to make sure the store is in accordance with halal guidelines.

The store, one of the top-grossing units on campus, goes through 1,500 pounds of rice, 2,000 pounds of halal-certified chicken and 250 gallons of sauce per week, creating chicken and rice bowls, naan rolls, salad bowls, naan quesadillas (Naanadillas), pita sandwiches with falafel and even bowls with zoodles. Rasoully says students see value in getting about a pound and a half of food for around $7.99.

The food is a smart take on the late-night halal cart food that true-blue New Yorkers cherish and chains like The Halal Guys have brought to a wider audience.

He classifies the menu as part of the “American Halal” genre: menu items that spell “comfort” to Americans, but with the spices of the Middle East. Since opening at SUNY Albany, Rasoully and his team have fine-tuned such elements as designated halal storage amidst non-halal concepts, cooking equipment and prep areas.

And he’s looking to do more. Earlier this year, a Halal Shack opened at Rensselaer Polytechnic Institute (RPI), in Troy, N.Y. This January, the next Halal Shack is set to open at Howard University in Washington, D.C.

Also aligned to open in other universities across the country next year, Rasoully says he’s in talks with large contract service providers for possible multiunit deals.

Halal Shack’s sister company, bottled Spin Sauce, has been selling online for a few years, taking off in 2016 when New York Times food writer Florence Fabricant raved about its “all-purpose potential.” Fabricant also made mention of Rasoully’s parents, who fled Afghanistan decades ago and opened a restaurant in New York. Cultural awareness runs through Rasoully’s mission for his company today.

But it all begins with the food.

“My biggest objective is to take the flavors I love from my culture and region and make them easier to understand for the everyday person,” Rasoully says.