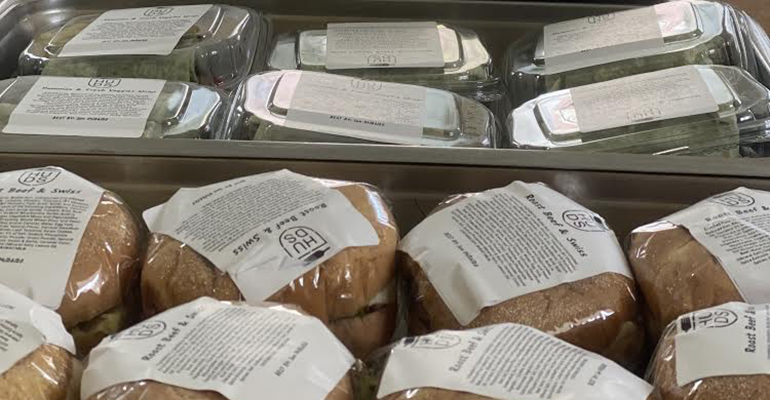 Harvard University sent the vast majority of students home in early March in response to coronavirus. To safely feed the few that have had to stay on campus for the rest of the semester, dining services is serving premade meals.

To provide meals for the roughly 300 undergraduate and graduate students still on campus, HUDS initially tried to continue serving food that was prepped in-house by kitchen staffers. “We’d prepare entrees, chill them, pack them in microwaveable containers and offer them to students,” Davidson says. 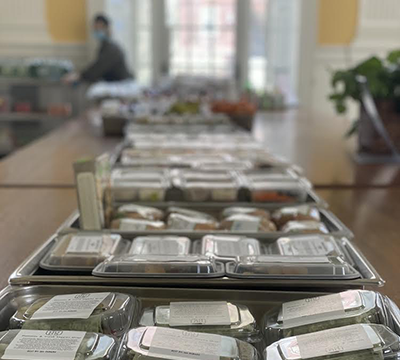 But close quarters in the kitchens made it difficult for employees to stay far enough apart, and the model quickly proved unworkable. “The ultimate goal is making sure staff felt comfortable,” says Davidson. So around March 23rd, HUDS made the decision to stop prepping food on campus and purchase premade, pre-packed items from outside vendors.

“We had the vendors produce a solid menu of sandwiches, salads and prepared entrees, and we’ve set it up so it’s a bagged meal program,” explains HUDS Director of Residential Dining Operations Bruce Calvert.

Meals are currently distributed at six locations across campus. Daily menus are posted online, with food available for pickup between 11:15 a.m. and 7 p.m. Students walk through a socially distanced serving line where all of the menu items are laid out on tables. “We’ve stacked tables two deep to create a physical barrier of eight feet between students and staff,” says HUDS Director for Strategic Initiatives and Communications Crista Martin.

The food line is staffed by three employees, each spaced six feet apart. As students walk down the line, they point to the items they want. “The items are placed in a bag that is passed along the line from one staff member to another, who move the completed bag across the eight-foot distance on a tray to a student,” Martin explains. All staff and students are required to wear face coverings, and staffers also wear nitrile gloves.

Despite the limitations, HUDS is striving to provide a varied menu for students, including options for vegetarians, vegans, and those with food allergies, as well as those celebrating Ramadan.

Lunch items typically include sandwiches or wraps, salads, whole pieces of fruit, pretzels or chips, and a brownie or other dessert bar. Dinners include two to three reheatable entrée choices like chicken Parmesan with pasta or sweet potato and quinoa chili, fresh fruit salad, crudité with dip, bread and condiments and a dessert. Hearty breakfast bags are also available for pickup the night before, and are filled with hard-boiled eggs, bagels with cream cheese or vegan butter, yogurt, cereal and milk and fruit. 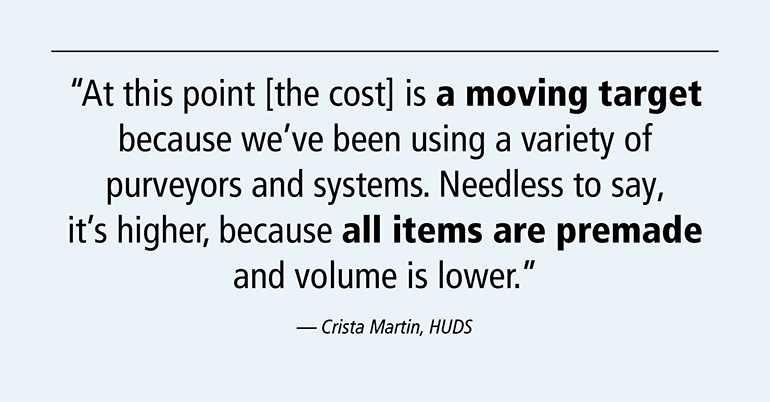 Outsourcing all of the food prep has been expensive. “At this point [the cost] is a moving target because we’ve been using a variety of purveyors and systems. Needless to say, it’s higher, because all items are premade and volume is lower,” Martin says. Redeploying some packaged food items from closed retail operations has helped a little bit. With the retail locations likely closed for months, HUDS anticipated it “would be better off using those items now than storing them and risk them going out of use-by date,” says Martin. HUDS is absorbing the extra costs for now, but Davidson notes that there’s no decision on how they will ultimately be taken care of.

With fewer students to serve and no cooking to do, the HUDS’s active workforce has shrunk from 400 hourly staffers and managers down to 60. Those who aren’t working are currently on excused absence and will continue to be paid through May 28th. “We’re discussing what will happen after that,” Davidson says.

Despite all the uncertainty, those that are still working are happy to be doing so, Calvert says. Students, too, say they’re satisfied with the meal options and have been expressing thanks to HUDS for continuing to serve them.

HUDS will get a much-needed break soon—and a chance to start planning for the future. Meal services wrap up when the semester ends on May 16, and no dining activity will take place on campus over the summer. “The focus now is on how we’ll feed students in the fall,” Davidson says. “Is prepackaged one option? Yes, but we’re looking at other things too. Nothing has been finalized yet.”