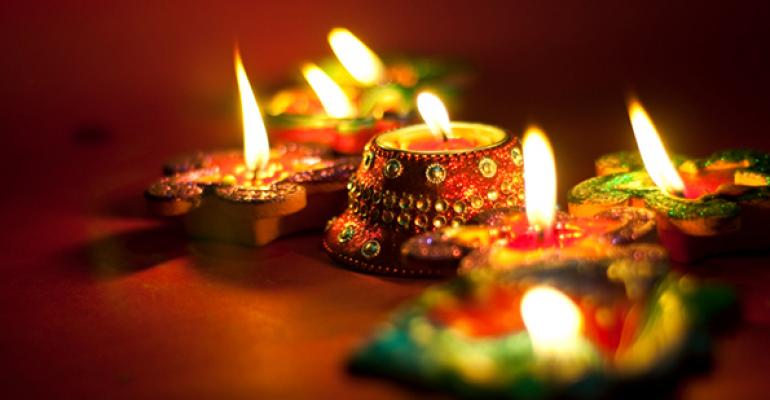 <p>BRIGHT LIGHTS ON A DARK NIGHT: The Hindu festival of Diwali, also known as Deepavali, signifies the victory of light over dark and hope over despair. Festival preparations and rituals take place during five days, but the main night coincides with the darkest new moon night of the Hindu Lunisolar month Kartik.</p>
News & Trends>Colleges & Universities

Hindu ‘Festival of Lights’ at Harvard

Diwali is an ancient Hindu “festival of lights,” celebrated on the darkest new moon night between mid-October and mid-November. It’s a happy time, celebrating light over darkness, and hope over despair. Hindus traditionally clean their houses, make renovations and even splurge on new clothing and jewelry during this time. Fireworks (patakhe) light up the sky.

This fall, Harvard University Dining Services provided its own culinary fireworks to go with the festival. Executive Chef Martin Breslin says the feast was by no means just for the Indian population at Harvard.

“As a whole, our community really loves Indian food,” Breslin says, adding that about 6,600 undergrads enjoyed the feast, which was served at all 13 campus dining halls. What’s more, the average person seems to like Indian food as a whole-meal experience, complete with the naan bread to rip apart, simple-yet-amazing rice and lentil dishes and the rich stews that make up the best parts of Indian cooking, Breslin says.

Harvard partners with a manufacturer for Indian sauces and bases, adding their own protein and veggies. Since Indian food can be complex to prep (toasting cumin and coriander seeds, and then grinding, etc.), many onsite operations partner with a manufacturer in order to provide consistent, properly balanced Indian flavors.

Entrées at the feast included Butter Chicken, or Murgh Makhani, that famous Indian-restaurant-menu staple that consists of marinated tandoori chicken and a spice mixture of garam masala, ginger, garlic paste, cumin, chili and citrus; Tandoori Salmon (the bright red color of the spice paste rubbed on the fish really made an impact, Breslin says); Makhni Dal (a dish from the Punjab region); and Green Pea Basmati Pullao (a very simple rice and pea dish). Everything was served with sides of raita (a cooling yogurt sauce that acts as a counterpoint to the heat) and papadum (a thin, crisp disk of dough).

While most of those in attendance may not have been to India recently, the contingent who call it home told Breslin that the flavors of the food “taste like home,” the highest compliment, he says he could receive.