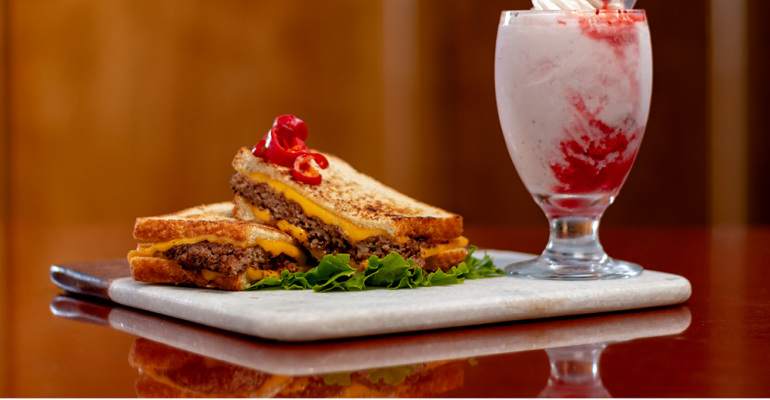 Lipscomb University challenged Sodexo to create a “unique to Lipscomb” dining option, and the result is a new concept that has boosted sales in its location 20%.

Last year, the dining services team at Lipscomb University, which is managed by Sodexo, was tasked with developing a “unique to Lipscomb” dining option. That “unique to Lipscomb” tag meant not only that the food in the new concept needed to be something different but that the concept itself had to reflect the core values of Lipscomb, a forward-moving, Christian-based liberal arts college located in Nashville for which Sodexo has served as dining services partner for more than two decades.

Following a collaborate review of current offerings and a look ahead at dining trends, the Sodexo Dining Services team created—entirely in-house—The Creekstone Burger Company concept, including menu, equipment set, logo and even uniform designs. Food trials and tastings were done with students, client representatives and Lipscomb’s president and CFO, all with positive results. 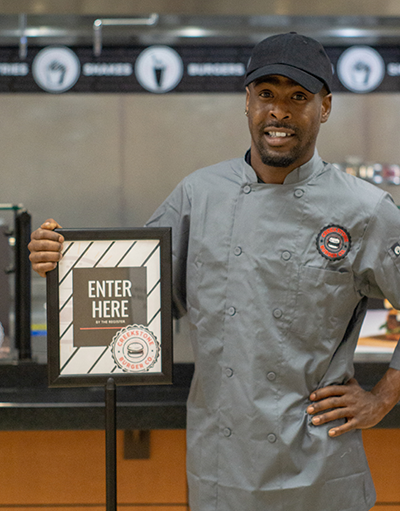 Creekstone replaced an underperforming Asian concept and has posted sales increases of 20%.

“Creekstone serves to provide guests with a menu that offers a feeling of nostalgia and familiarity coupled with quality and innovation” is the way Sodexo General Manager Wolcott Fary describes the concept. “In keeping with the ‘unique to Lipscomb’ ideal, the menu sets were designed to allow for maximum flexibility and the freedom for guests to be inspired to create custom and more personalized options.”

The process “exemplifies Sodexo’s customer-centric mission,” he adds. “Sodexo allows its management teams the flexibility to exercise their passion to serve our customers in a way that allows for creativity in the development of offerings with the individual account needs in mind.”

Aside from “unique to Lipscomb,” the team had one other directive from its client once the nature of the new concept was identified: “Create a fantastic burger,” which “not only inspired our creativity but offered us the opportunity to collaborate with the university to design and create a burger to rival any in Nashville,” Wolcott observes.

Sodexo’s team of culinary experts met with the Lipscomb community over the course of several weeks to sample and vote on a perfect burger. They tested a combination of six beef blends, five burger buns and four spice blends and finally came up with a winner, a specially-seasoned, one-third pound, 80/20 blend of locally-sourced beef on a brioche bun.

Each is hand-formed into a ball, then smashed it on the griddle, a dramatic visual sign to guests of a commitment to freshness that also includes complements to the burger menu such as house-made dill pickles, hand-cut fries, hand-dipped corn dogs and onion rings. Meanwhile, the buns are toasted using real butter.

To round out its menu offerings at Creekstone, the Sodexo team chose hand-spun milkshakes and a sandwich melt section that includes a classic grilled cheese sandwich made with brioche buns, butter and a choice of cheeses, as well as a bacon/egg/cheese melt and an avocado/bacon melt.

To meet specific dietary needs, the team worked with the campus dietitian to offer gluten-free buns and red-meat alternatives such as a turkey burger and the vegetarian Impossible Burger. Weekly specials featuring selections such as a banana split milkshake, a smoked brisket barbecue burger or a pimiento cheese bacon melt both showcase the staff’s culinary talents and offer variety.

“We designed Creekstone Burger Company with ‘approachable-quality’, meaning we wanted everything to feel comfortable for the guest, while focusing on a quality product,” Wolcott says.

Implementing Creekstone presented a challenge as the concept required a specialized equipment set and large hood system. So out went Far East Fusion, an Asian sushi/hot bowl concept that was experiencing a dip in traffic and engagement anyway, while two other existing concepts—the popular local brand Blue Coast Burrito and the national brand Papa John’s—were relocated and refreshed with updates to equipment sets and store fronts.

Blue Coast Burrito was moved from an area with a hood system that could accommodate Creekstone to a smaller footprint area that formerly was occupied by the Papa John’s station. The space was then modified with a state-of-the-art vent-less hood system, an electric griddle, fryers and induction plate and the concept’s protein offerings were upgraded with a sous vide style of preparation that ensures consistency while saving space.

The Papa John’s unit was then shifted to the area previously occupied by Far East Fusion, which was opened up with the removal of a wall. The menu was also enhanced by adding made-to-order personal pizzas.

Then, the former Blue Coast Burrito space was redefined to utilize the existing hood system for the new Creekstone station, along with the additions of griddles and fryers, coolers and work tables, and a newly designed front counter that could accommodate a specialty soft serve machine and milkshake station. Also, the redesign of the pass-through service deck allowed for direct customer contact and interaction.

The success of adding Creekstone can be measured by comparing year over year sales to the concept it replaced—Far East Fusion—as Creekstone’s sales ran 20% higher over the same time period the previous year.