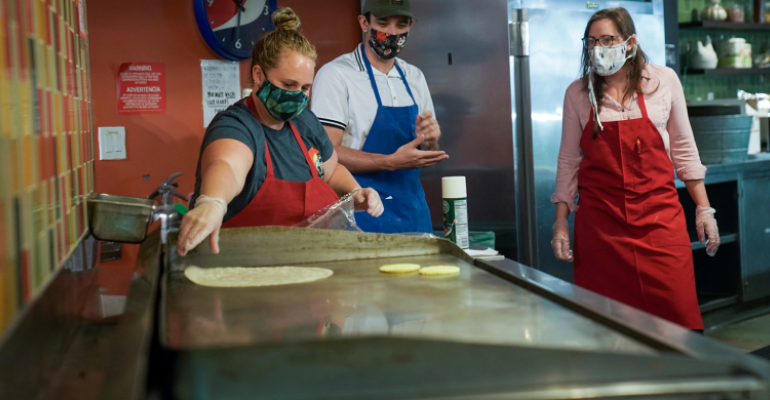 How to set up a delivery program on a college campus

In pre-coronavirus times, the University of California, Davis’s ASUCD Coffee House (better known as the CoHo) was a bustling, multistation retail space that served 8,500 students, staff and general public on a busy day. But California’s shelter-in-place order put a stop to that last spring. The order also meant the resident student population plummeted from about 5,500 to 500.

That left Darin Schluep, foodservice director for UC Davis’s associated students dining service, with a dilemma: how to still feed the remaining employees as well as the off-campus students still in town, hunkered down at home. “We wanted to remain active and relevant in the community on some level, so we started looking at how we could do delivery and pickup out of the operation,” he says.

The facility already had a mobile ordering system through a partnership with GrubHub, so Schluep and his team decided to riff off that and set up a delivery program, in addition to providing contact-free takeout.

It took about a month to puzzle out the logistics of delivery.

Students are asked to pitch in with both prep and delivery.

Step one involved settling on a menu that would travel well and be relatively easy to produce by a lean crew. The CoHo is a marketplace with stations for coffee drinks, pastries, Tex-Mex, salads, pizza and sushi. Given that potential demand was difficult to forecast, “we wanted to start with a conservative staffing model,” Schluep says. That meant limiting the scope of the menu to more popular choices. All told, some 450 items at seven platforms were winnowed down to 25, along with a selection of coffee drinks.

Some of those items needed to be adapted to delivery as well. Pizza, normally sold by the slice, morphed into a personal-sized version. Dough for the pizzas, formerly scratch made, was converted to premade to avoid wasting fresh dough that wasn’t used. The staff determined coffee drinks had to be made at the last minute before delivery to maintain temperatures.

Schluep says the plan was to gauge customer volume and feedback to determine whether the choices were adequate. “If we were getting a lot of requests for an item, we would look at operationally how we could make it happen,” he notes.

The next step was to determine staffing levels for the scaled-down operation. Normally, CoHo employed about 450 hourly student workers and seven supervisors. The streamlined service launched in mid-May with 12 students and five employees.

Staffing has been tricky, for a number of reasons. “We’re overstaffed, but we wanted to err on the side of being over rather than understaffed,” Schluep explains. “It was a bit of a guess as to what our needs would be. Also, we needed to factor in how many people we could have in the space: we wanted to be conscious of physical distancing and make sure our employees felt safe.” The students hired for the scaled-down operation were asked to be flexible and to pitch in on food preparation and delivery.

Orders are transported using vehicles in the campus pool, electric carts and bikes. Staffers provide touchless delivery, leaving orders at the doorstep and sending the customer a text alert. Takeout orders are also touchless, left on the CoHo patio after patrons call the kitchen to announce their arrival. 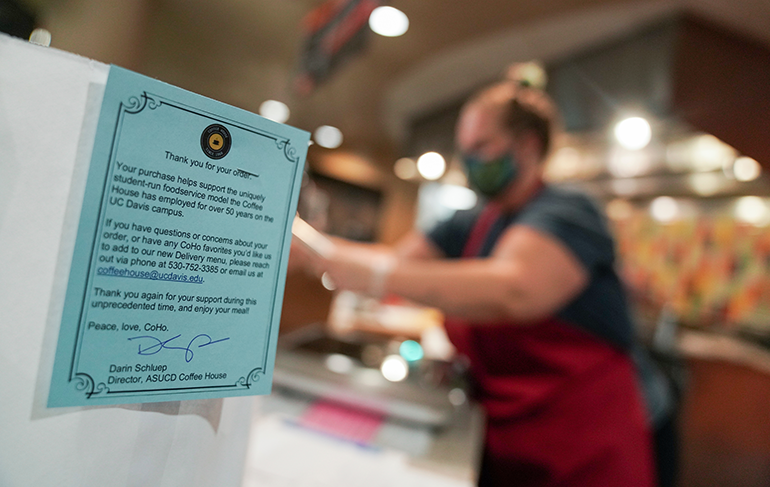 A personal note from the foodservice director goes out with every order.

Before formally promoting delivery, the team did three trial runs, offering some of the regular student workforce a free lunch, followed by a survey about the experience. “We ended up doing three trial runs, because the first two went so horribly,” Schluep says. In the initial test, order-to-delivery time averaged a whopping 90 minutes. Part of the problem was inadequate staffing, the other part was those electric carts, which weren’t built to travel across campus to the far reaches of the city. By the second run, the turnaround was down to an hour; the third time, it hit a more reasonable 40 minutes.

It has been slow going, with an average of about 25 orders a day. “It has not been as successful as I would have liked,” Schluep admits, “but it’s still a work in progress.” He says timing—getting out of the gate a few weeks before the end of the spring quarter—and relying mainly on social media and word-of-mouth promotion probably hurt the chances of CoHo Delivery taking off right away. The absence of many students and staff in town and limiting orders to the GrubHub platform might have kept numbers low, he adds.

Schluep says this brief experience has been a valuable learning experience, and he hopes to restart in the fall as students return. The service has been received enthusiastically—especially a hand-signed note from Schluep thanking the guest for the order, for supporting the operation and by extension supporting the student employees.