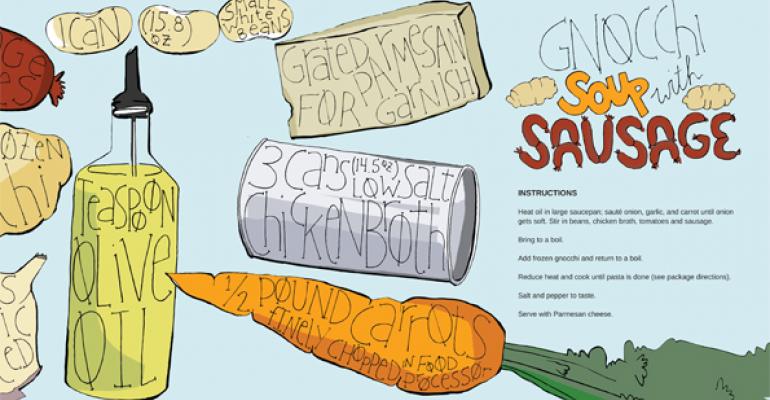 (This article is reprinted with permission from UConn Today, an online blog published by the University of Connecticut).

Although they already have more than 4,000 recipes to use, the skilled chefs who guide the preparation of nearly 180,000 meals per week in UConn’s dining halls always seek out new dishes to introduce to the campus community.

The “Recipes From Home” program, which serves favorite family meals students enjoyed while growing up at home, was launched by Dining Services several years ago. A newsletter was sent to parents of students requesting recipes, and hundreds were submitted. A team of Dining Services chefs selected a group of recipes that were tested in the eight residential campus dining halls and, after configuring the preparation for hundreds of servings instead of merely a small family meal, several were added to the cycle of menus.

Many of those favorite family recipes are still served each week at UConn, but now they are being shared through an online cookbook titled “Recipes from Home: A Collection of Recipes from UConn Parents and Students.” The cookbook, featuring 29 of the recipes, is a cooperative effort between Dining Services and art students in the School of Fine Arts. 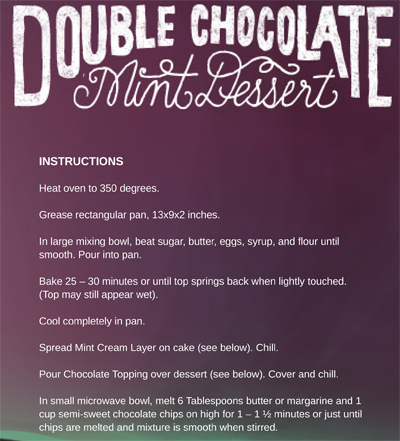 The idea for a cookbook had been simmering for some time, until it was moved to the front burner during a conversation late last summer between Dennis Pierce, director of Dining Services, and Gail Merrill, publicity marketing manager.

“The cookbook was always an idea in my mind, but we didn’t have time to do it,” says Merrill. “When Dennis said we should resurrect it, I happened to be in an art museum and picked up a book that had illustrated recipes. It was a real cool looking book. I thought: why don’t we talk to our illustration students?”

The opportunity to provide a real work assignment for students was welcomed by three members of the art faculty: Cora Lynn Deibler and Alison Paul, who guided their students through the illustration assignment, and Mary Banas, who led her students through creating design templates for the two-page recipe spreads.

“It’s a good preliminary professional practice for these young illustrators to engage in this kind of project, rather than simply doing projects that go between themselves and the professor,” says Deibler, whose client list includes The Big Apple Circus, “Weekly Reader,” Scholastic Inc., and Oxford University Press. “We work hard in the illustration department to connect our students’ work with someone outside the classroom.”

The process of developing the book started with students at the Design Center, a student-run design studio that assists departments at UConn with a range of communication design projects, such as brochures, graphic identity, websites, and other visual needs under the guidance of Banas, a visiting assistant professor of art and art history. Recent projects have included the identity design for the UConn Reads program; “The Long River Review,” the literary magazine of the Department of English in the College of Liberal Arts and Sciences; and “Joy,” the University holiday video.

As the project drew near to conclusion, students in Deibler’s class used push pins to hang their three designs on the wall of a large studio in the Art Building adjacent to the Contemporary Art Galleries. The requirements of the assignment included allowing for hand-lettering of the ingredients and cooking directions, as well as creation of original drawings to illustrate the pages. 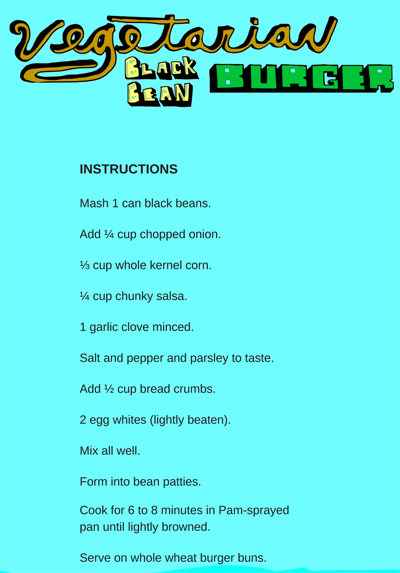 In this stage of the process, the small sketches on paper provided an opportunity for a group critique. Among the designs displayed were a tower of cake with dripping lines of chocolate for a “Double Chocolate Mint Dessert;” a caricature of a piece of meat wearing a crown for “Brisket of Beef Extraordinaire;” and a “Mustard Baked Chicken” recipe featuring chickens as mustard and mayonnaise squeeze bottles dancing with bread crumbs – all ingredients in the recipe. Swatches of colors lined the top or sides of the pages to indicate the color palette each artist would use in the final, full-color illustration.

Walking along the wall to survey the work, Deibler scanned each student’s work before starting an in-depth review of each, offering suggestions for improvement, guidance for additional resources to utilize, and cautions on technical points of the design, such as the proper way to use reverse type – white lettering on a dark background.

On the “Brisket of Beef Extraordinaire” pages, for example, she suggested that using illuminated type in the title might add to the royal image presented by the student. For an apple crisp recipe that suggested a “Snow White” storyline, Deibler indicated that the angle of view should change to emphasize the dish, not the characters.

“The food needs to be the star,” she said, noting that although the apple does play a role in the “Snow White” story, in the recipe it is the central focus.

Noting that two students had not followed the basic requirements of the assignment, including not following the template designs, Deibler pointed out that not fulfilling a client’s specified directions could cost them not only that job, but also future assignments.

“That’s the beauty of the educational classroom,” she said later. “This is an environment where you can call it to their attention and make the point of how serious that really can be, before they go out and make that mistake.”
Cookbook2

The class critique also included students sharing their views on everyone else’s work, as was the case two days later, when both illustration classes and some of the Design Center students gathered to review the designs. Merrill was there too.

Haley Taylor ’15 (SFA), who adjusted her design for the chocolate mint dessert for the group presentation, says hearing the reaction from other students and professors provided new insights into her work.

“It definitely helps to get other people’s opinions, because they see things that you don’t see because you are so close to what you are working on,” Taylor says. “It makes sense to you in your own head, but then when someone else who hasn’t seen it before, which is what would happen in the recipe book, they see something you don’t see, like the chocolate syrup not looking fanciful enough. That’s something I could work on going forward.”

In addition to adjusting the designs for the group presentations 48 hours later, there was an additional twist to the assignment – for the students to prepare the recipe they illustrated. As they gathered for the group critique, the area outside the Contemporary Art Galleries – known as The Arena Gallery – was filled with the aroma of entrees and baked goods.

“I’m really excited, really pleased with the outcome of the design and illustrations,” Merrill says of the final work by the students. “They show such a high degree of creativity and wide variety of illustration styles. They’re very informative and very fun to look at. I can’t thank Cora, Alison, and Mary enough. They totally embraced this project, and presented it to their students in a way that got them completely involved and excited. The results are fantastic!”