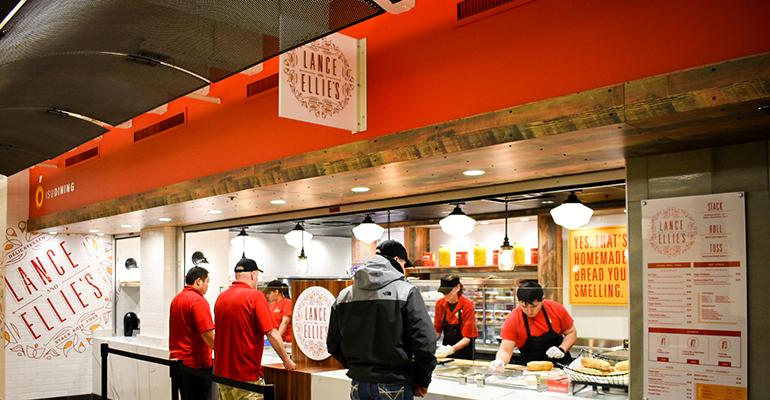 Lance and Ellie’s allows students to customize their meal by either stacking, rolling or tossing a selection of high-end meats, cheeses, toppings and dressings.

At the beginning of 2017, Iowa State University Dining made a list of goals the department wanted to achieve by 2018. One of those goals was recently realized when the university opened its newest retail dining outlet, Lance and Ellie’s.

Named after ISU’s swans, Lancelot and Elaine, the retail sandwich shop is an original idea for ISU Dining. It replaced a Subway.

“We wanted to create our own branded upscale retail sandwich shop,” says Kristi Patel, assistant director of ISU Dining. “We can now better control the quality of the ingredients.”

“The concept is modeled after a New York delicatessen,” says Green. “We hang our hat on the quality of our ingredients. We use whole-muscle meats, breads that we make from scratch, artisan cheeses and housemade dressings. The customer can see everything as it’s being made. They can smell the fresh-baked bread and watch us slice the meats.” Located in the student union, Lance and Ellie’s invites students to customize their sandwiches, wraps or salads. First, they must choose either a “Stack,” “Roll,” or “Toss.” Stacks are sandwiches. Rolls are wraps. Tosses are salads. The customer then chooses between nine different ingredient combos including selections such as the So-Cal, featuring turkey, bacon, Swiss cheese and avocado puree and the pepper chicken, featuring roasted chicken breast and three pepper Colby jack cheese. Hot Stacks—or warmed sandwiches—are also available along with a series of sides such as potato salad and a housemade edamame salad and treats like a marble cookie or a mocha brownie.

Most importantly, everything is completely customizable.

“When you replace a national brand like Subway, it’s critical to get student buy-in early on,” says Green. “We did lots of tastings and control groups early and through those found that our students value quality and personalization. Lance and Ellie’s delivers on both.” In order to get up and running, ISU had to completely gut and rebuild the space once Subway vacated. All new equipment was purchased and the layout of the space was redesigned to me more functional.

“We didn’t want anyone to look at the space and think, ‘you took a Subway out,’” says Patel. “We created our own brand and spent a lot of time and effort developing it.”

Construction took the majority of the fall semester, but Lance and Ellie’s opened for business Jan. 17. So far, it’s going really well. “It’s in a very visible space, and the potential to increase sales is huge,” says Patel.

“We’re seeing a lot of repeat guests,” says Green, adding that the team in place is doing a fantastic job with production and speed. “Our biggest challenges were with construction taking longer than we hoped and having to onboard the team in about a week,” says Patel.

In the next few weeks, Lance and Ellie’s will be available via GET Food, an online food ordering app that allows students to order and customize meals from a phone or computer and schedule a convenient pickup time.