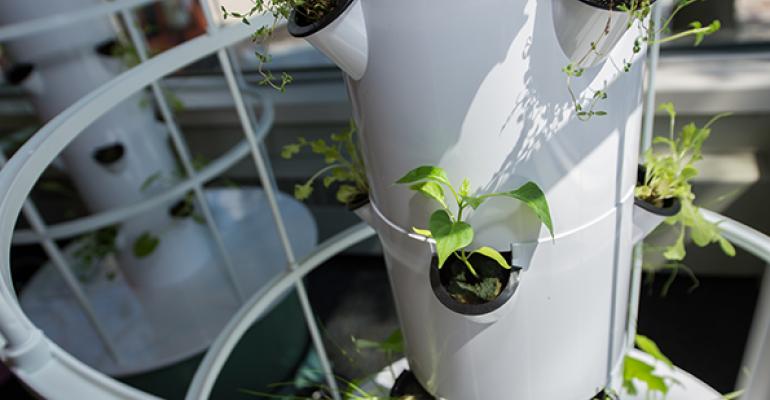 <p>Three vertical towers at the University of Wisconsin Oshkosh grow vegetables and herbs for use in dining services.</p>
News & Trends>Colleges & Universities

Jack and the beanstalk without the magic beans

At the University of Wisconsin Oshkosh, the sustainable food movement has shot up—as in, greens and herbs are being grown right in the Blackhawk Commons servery in a vertical gardening system.

“Some UW Oshkosh students had been working on summer garden projects, but those don’t work well during winter months unless you’re trying to grow icicles,” says Marty Strand, assistant director for dining operations at the 14,000-student campus. “I had been on the lookout for a good indoor garden system. Then I heard that our friends at Ripon College [in Wisconsin] were growing greens for specialty sandwiches and salads right in their dining room in a tower garden system.”

“Everything we grow on the towers will be used in dining operations at Blackhawk Commons and campus catering,” Strand says. “Sourcing locally grown produce has been one of the top initiatives of our foodservice providers, Sodexo Campus Services.”

For its first gardening attempt, the team planted a wide variety of garden vegetables. “We grew Swiss chard, peppers, parsley, cilantro and a mesclun mix,” Strand says. “We harvested nearly three pounds of greens after only a month and a half.”

“But now we’re going to specialize,” Strand continues. “Two towers will hold only lettuce, and the third will have only herbs—basil, thyme, oregano, sage, mint and cilantro. Herbs tend to be more expensive to purchase so this will give us a faster return on our investment.”

Strand expects the ROI to take about two years. “When we added up all the expenses – the initial purchase price for the three towers, labor to assemble the units, the extra supplies (grow lights, stands, etc.), as well as electricity costs for pumps and lights—the total came to nearly $3,800,” Strand says. “In year two, we estimate it’ll cost us about $600 for the three towers to cover seeds, nutrient solution, electricity and water. At that point they should start paying for themselves.”

“This is an aeroponic growing system, which means there’s no soil,” Strand says. “A pump carries water from the reservoir to the top, where it showers down over the root systems of the plants. The pump runs on 15-minute cycles—that ensures roots get the right combination of water, oxygen and nutrients.” As a result, plants tend to grow about 30 percent faster, according to Tower Gardens, the vertical growing system supplier.

“Grow lights (also on timers) will allow the garden to grow year-round,” Strand says. The grow lights also draw people’s attention to the vertical gardens, making them a focal point no matter where they’re placed.

“We hope the tower gardens will help spotlight other sustainable efforts taking place on campus,” Strand adds. Those efforts include an anaerobic biodigester that allows dining services to divert most of its organic waste from landfills. “We also hope the gardens will lighten students’ moods during the short daylight hours of winter.”

“People have been really excited and interested by the tower gardens—they look that cool,” Strand says. “The towers are placed in a window overlooking the sidewalk—we’ve had people make special visits inside just to see them up close. The local TV station was out recently to cover them as well. We’re working on informational signs to pique student interest in campus sustainability. It’s my hope students will want to expand this effort.”

As with any garden, the towers require regular attention—but it’s minimal compared to traditional gardens. “We spend about 30 minutes a week in all,” Strand says. “The main tasks include checking pH levels, adding the special nutrient solution and replenishing the water.”

Unlike traditional gardens, a steady power supply is a must. “We did have someone unplug one tower over a weekend by accident, but the plants survived,” he says.