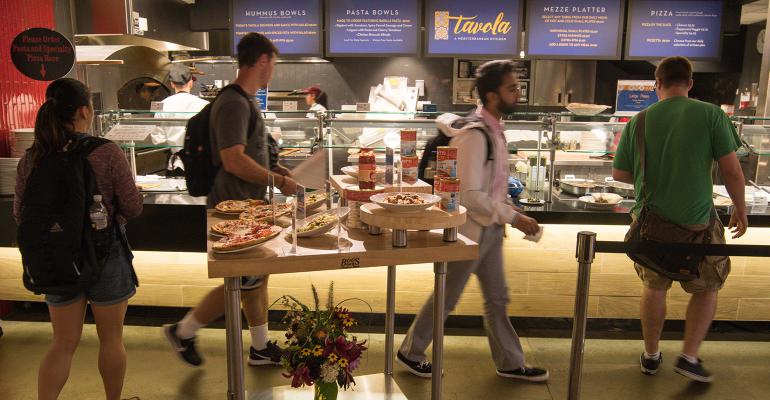 The pizza numbers weren’t adding up at the University of Massachusetts-Amherst (UMass). When Van Sullivan, director of retail dining at UMass, looked at data from a campus pizza concept inside UMass’ Blue Wall dining location, he noticed that the overall relevance of pizza “as a standalone concept” had been fading bit by bit each year, he says.

“We had made some mistaken assumptions about pizza volume when we redeveloped the space and found out post renovation that much of the previous sales had been driven by the convenience of a hot grab-and-go item and less by an actual desire for traditional pizza,” Sullivan says. This revelation, paired with a general downturn in consumers’ collective disdain for gluten and carbs, meant “we needed to readjust the menu without straying too far from the theme,” since equipment for pizza and pasta was already in place, he continues.

Without a totally Mediterranean concept elsewhere, and considering the well-documented health benefits of the Mediterranean diet, the UMass Dining team decided to move forward with a new concept showcasing the fresh, visually appealing character of that cuisine.

Lucky for UMass Dining, there happens to be an alumna who’s a famous chef, cookbook author and teacher whose trademark is Mediterranean cuisine made with amazing local produce.

Joanne Weir, who made her name as an Alice Waters acolyte in Berkeley during the California food revolution, has always kept her alma mater close to her heart. She’s appeared at various UMass culinary conferences, guest chef events and cookbook signings, and now, she’s helped launch a new Mediterranean concept, Tavola. “Joanne really helped a lot with a strict emphasis on freshly made product and better ingredients,” Sullivan says.

Weir worked with the culinary team to create a menu that’s divided into made-to-order, customizable hummus bowls, pasta bowls and pizzettas. The components of the menu items include hummus that’s made in house, grilled skewers and pita bread straight out of the oven. Locally made fennel sausage and high-quality imported tomato sauce “is so much more appealing than the traditional pasta bowl that we see so often,” Sullivan says.

Since the first week in September, Tavola’s open kitchen has been up and running, meeting the demand for comforting Mediterranean lunch food that’s healthier than pizza.

Hummus bowls are served with meaty skewers, sauce and salad, or with toasted pine nuts, feta and salad for a vegetarian option.

Pasta bowls can be customized or ordered in selections that change daily, such as rigatoni with tomatoes, spicy fennel sausage and cream; linguini with pesto and cherry tomatoes; and chicken-broccoli Alfredo. Mezze platters and pizzettas (personal pizzas with high-end ingredients like prosciutto and fresh tomatoes) are also available.

The best-sellers thus far have been hummus bowls and pasta bowls, but the pizzettas have been providing the biggest “wow factor,” Sullivan notes.

A retro prosciutto slicer and a small sheeter to make the fresh pita bread are the only specialized equipment needed…the rest is standard to a regular pizza concept.

Thanks to Weir’s contributions, there’s nothing ordinary about it.

“It was a great match,” Sullivan says. “Joanne brings a total Mediterranean perspective and a lot of practical advice along with a genuine passion for this cuisine.”