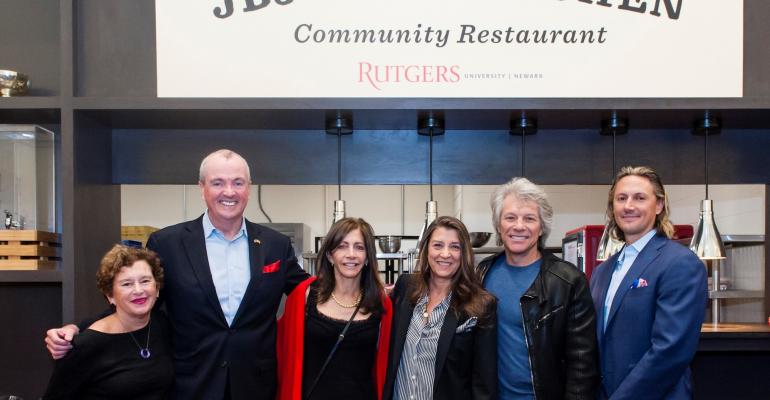 The new college dining option gives students the option of paying forward for their three-course meal or volunteering.

Veteran rock star Jon Bon Jovi’s JBJ Soul Kitchen concept opened recently at Rutgers University in Newark, the chain’s first on a college campus. Instead of serving food that customers pay set prices for, however, the concept offers a three-course meal in exchange for either a pay-it-forward donation or a period of volunteer labor at the unit.

Soul Kitchen’s approach is especially resonant for Rutgers-Newark because half the student body comes from low-income families and a majority are the first in their families to attend college, says Michael Frungillo, president of management company Gourmet Dining, a unit of Compass North America that has operated campus dining services at Rutgers-Newark since 2017.

“From the start, our mission has been to assist in getting these students an education while giving them access to affordable food,” Frungillo explains, noting that Rutgers already had food insecurity programs such as a “robust” campus hunger pantry. 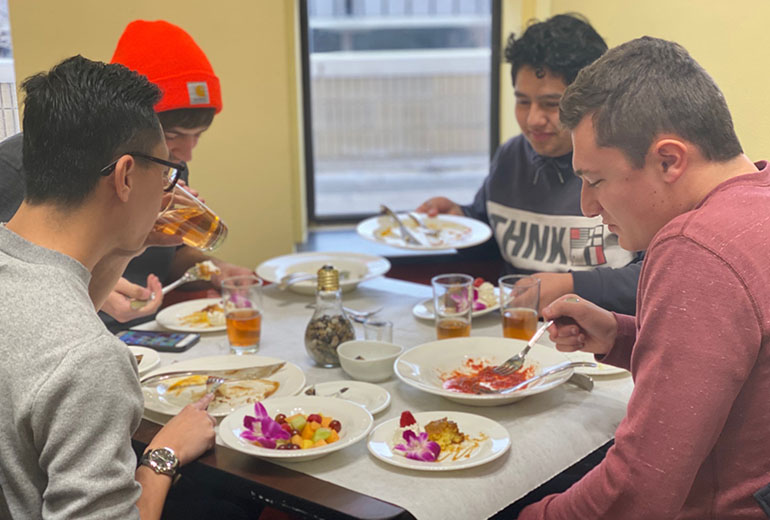 The Rutgers-Newark campus community as well as customers from nearby businesses and institutions are encouraged to patronize the JBJ Soul Kitchen and either pay-forward or volunteer.

However, one day, Frungillo says he noticed a long line in the concourse above the campus cafeteria and was told it was for the food pantry.

“I then looked at all the things we were doing [to fight food insecurity on the campus] and decided, we need to come up with something better,” he recalls. “So I challenged our team as we would with any kind of dining innovation and found that there was this JBJ Soul Kitchen right here in New Jersey.”

After having Soul Kitchen’s pay-it-forward approach explained to him, Frungillo went to the concept’s location in nearby Red Bank to have lunch and take a look around.

“Right from when we walked in, I just got it and said, ‘we need to do this,’” he recalls.

The way the concept works is that customers are asked to pay at least a minimum of $12 or a meal plan swipe for their meal but then are given the option to also pay more (the “pay it forward” option) or, alternately, they can work off payment for the meal by volunteering in the restaurant.

“It was just such a welcoming environment for those in the community who are food insecure and those who come in and maybe leave $50 on the table,” Frungillo says about his reaction to seeing the concept in action. “I saw the interactions of everyone and thought, this would fit so well and address such a giant need that we have at Rutgers.” 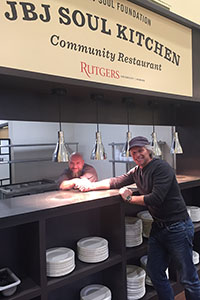 He spoke with the manager that day, and Bon Jovi’s wife and JBJ Soul Kitchen co-founder Dorothea followed up a couple of weeks later with a visit to Rutgers-Newark where she learned about the campus dining operations and the food pantry and agreed that Soul Kitchen would be a great addition to the mix.

Soul Kitchen solicits visits not just from students but also staff and the surrounding community, which includes a fair amount of business and industry as well as a courthouse directly across the street.

“Ultimately, I think that’s the next step, to bring the community together, to have say a judge from across the street have lunch with a pre-law student, which may lead to a summer internship or a connection to a law firm,” Frungillo explains. “After all, as a university, we want to not only sustain students while they’re here but enable them to get jobs so they can sustain themselves in the future.”

Promotion of the unit off campus has included not just the major media event at the concept’s launch but involves sending volunteers to the surrounding businesses and institutions and working with existing Rutgers partners in the business community to encourage their employees to patronize the café and to hold lunch meetings there.

The concept’s formal launch event on Jan. 22 was preceded by a six-month pilot phase during which operational issues were ironed out.

So far, about a hundred students have signed up to volunteer, Frungillo estimates. “We try to do about 15 per shift on a busy day and are looking to expand it to [have them] volunteer on other parts of campus.”

No volunteer offers are turned away, he adds. They are assigned fairly basic tasks like folding napkins, sorting silverware and preparing the paper table covers for the next sitting. Eventually, these may lead to more elaborate assignments as repeat volunteers gain experience, and if they show an interest in foodservice work they may even land positions with campus dining down the line, Frungillo says.

The Rutgers Soul Kitchen unit is right at the entrance of the Paul Robeson Campus Center, which is located on a major thoroughfare on the edge of campus, making it easily accessible for both on- and off-campus traffic.

The food, made primarily with locally sourced ingredients, consists of a three-course menu of appetizer, entrée and dessert and features dishes such as soul spiced barbecue pulled beef, coffee and soul spiced short rib and maple roasted chicken. All meat served is certified halal while kosher is available upon request, and there are always vegan and gluten-free options.

Besides volunteers, the staff includes four full-time employees of Gourmet Dining. Hours are 11:30 a.m. to 1:30 p.m. Monday through Friday.