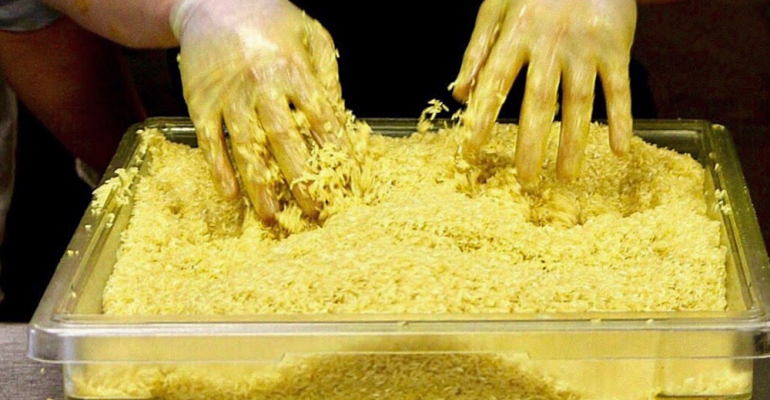 Now at SUNY Binghamton and New Paltz, Chick-N-Bap is a concept created by an alum, an immigrant who got to know American culture through the melting pot of New York City’s late-night chicken-over-rice scene. 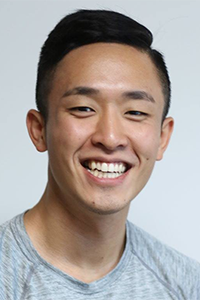 Sung Kim was a senior in a business class when he grabbed the chance to pitch the idea of a street food station to Binghamton University President Harvey Stenger, who was a guest speaker in his class that day. For months leading up to that, Kim (left) had been recreating New York City’s beloved chicken over rice for friends out of his apartment and riding a bus to deliver to students on campus, and the volume was quickly getting out of control.

Kim’s inspiration came from wanting to share the experience of chowing down on chicken over rice that was so familiar to him from nights out in Queens, N.Y., with friends. Attending Binghamton, he was missing his late-night fix, which was also a cultural connection.

Born in Korea, Kim first arrived in the states at age 10 in San Diego, but shortly after moved to New York City, where he did most of his growing up. As the only Korean kid for much of his early schooling, he says he always felt a bit like an outsider. The rich food culture of New York helped him realize that it takes a lot of flavors to make the world.

“When I was in high school, my mom would make us a Korean breakfast with rice, soup, kimchi and a dish of meat in the middle that everyone shared…no one I knew ate like that for breakfast,” Kim says. “I would brush my teeth three times before going to school!”

The mornings were about Korean comfort food, but out in the street, Kim found something new, and just as comforting, but in a different way: the halal chicken and rice trucks that roam the city streets in search of hungry late-night workers and revelers.

But it was that duality that eventually translated into Chick-N-Bap, a concept that begins with a base of chicken and rice, but changes the face of it with Korean flavors.

On that fateful day Kim approached the university president, he was soon on his way to a trial-basis weekend pop-up in collaboration with Sodexo. The numbers quickly impressed everyone involved.

“When I talked to Sodexo, they didn’t realize just how popular this was going to be,” Kim recalls. “I asked them, ‘What number [of sales] would impress you?’”

When the answer was 150 sales over a weekend, Kim guaranteed 300. On the first weekend, Chick-N-Bap made 550 sales. The pop-up grew to several more days each week, leading to 1,300 sales and eventually 2,000 sales over a three-day period.

Now, Chick-N-Bap has a permanent home at Binghamton’s MarketPlace, and also at on the SUNY New Paltz campus. The atmosphere of the concept sets it apart from others by sight, sound, smell and taste.

The platter, Korean hummus and the Bapprrito.

In a way, Kim wanted to recreate the sensory experience of a New York night.

“You hear hip hop playing, you hear the metal banging on surfaces…it just reminds me of the city,” he says.

Incorporating Korean flavors happens everywhere on the menu, from adding sesame oil to the rice to the marinade of the chicken and the gochujang that sparks flavor and heat. Burritos and some new corn side dishes change things up enough to keep the selections interesting.

The atmosphere of Chick-N-Bap has made the concept more attractive to not only customers, but also to student employees, and that’s intentional, Kim says.

“We have the clothes and hats, we’re blasting old school hip hop—a lot of Biggie—and that’s how we got job applications. Students said, ‘This looks like a really chill place to work in,’” Kim says.

And while the hip hop may be old school, the technology isn’t. Wanting to get away from “punching in” to work, Kim developed a mobile system that’s synched up to payroll.

Another defining factor of Chick-N-Bap is the health aspect. While traditional white sauce that you’d find on chicken from a food truck is fairly high in fat and calories, Kim’s recipe makes these meals a choice that fits students’ healthy eating days rather than being a late-night mistake. Kim found in his research that white sauce at Halal Guys is 165 calories per ounce and 18 grams of fat “vs. ours is 35 calories and 2 grams of fat per ounce,” he says.

“I’m a gym junky and I hate it when concepts go, ‘We’re healthy,’ but they’re really not,” Kim says. “Now a big portion of our clientele is gym-goers, because putting our white sauce on their chicken fits their macro.”

Kim says he’s in talks about expanding into other colleges and is weighing the options of eventually franchising Chick-N-Bap.