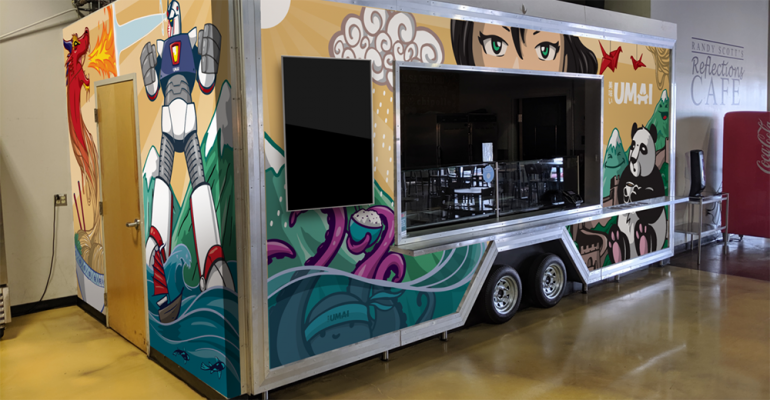 Liberty Dining/Sodexo
Umai is a new Asian-themed dining concept at Liberty that is designed to look like a food truck though it is a fixed indoor station.
News & Trends>Colleges & Universities

Liberty University’s dining program, operated by Sodexo, has been upping its game for at least a dozen years now, accelerating it recently with concepts like pizza delivery, a gluten-free bake shop, personalized pasta, premium burgers and a Best Concept Award-winning c-store.

Not content to rest on those laurels, the new school year finds a couple of new concepts debuting to tempt students and staff: an in-house-designed Latin cuisine station called Fuego and an Asian concept called Umai.

The Fuego menu features dishes such as Sparky’s Chicken Burrito Bowl, El Antojo Queso Mac, Sabroso Quesadilla, Southwest Macho’s Beef Tacos, Baja Beef Taco Salad and, for dessert, the Incredible Oreo Burrito. These are accompanied by an extensive selection of toppings, clarity on calorie content and the option to switch out any protein with cilantro chicken, seasoned ground beef or chipotle sweet potatoes.

Umai, meanwhile, gives students the opportunity to “create your own bowl” by choosing a base, a protein, toppings and a sauce. Each bowl comes with an egg roll and sides include pot stickers and crab Rangoons.

Liberty Dining conducted a test-run of Umai in late March and got a 90% satisfaction rate among students surveyed. The designs for the concept were developed in-house and all are original illustrations by a Liberty graduate, Caleb Hall.

Umai and Fuego also both feature kiosk ordering systems after they proved successful at other retail locations on campus, increasing line speeds by an average of 40%.

Among other changes, Einstein Bros. Bagels has a new location at Tinney Café inside the Jerry Falwell Library, a move that has boosted its sales by 15.6% so far.

Meanwhile, in a bid to give student athletes the best possible nutrition for their recovery after practice or games, a brand-new Training Table on the 2nd floor of Carter Tower in Williams Stadium is now reserved exclusively for their use, unlike the previous training table in the Reber-Thomas Dining Hall that allowed use by any student. Liberty Dining’s dedicated campus nutritionist designs the menus that will be served to the student-athletes.

“Having a space dedicated simply to fueling and supporting them has tremendous benefits like more nutrition education, relationship building and higher-quality meals,” says Liberty’s Director of Sports Nutrition Danielle Gillen. “It means we are investing in them and caring for them from a more holistic standpoint. The athletes dedicate so much of their time to their sports, and having a space dedicated just to them helps us invest in them as they invest themselves in our program.”

The space is conveniently located near Liberty's athletic facilities and includes a smoothie station, grab-and-go snacks and fruit, rotisserie oven, grill and made-to-order favorites. It seats 134 and is also used during sporting events.

Other enhancements in the dining program for 2019-2020 include giving the Simple Servings food allergen-free station its own space at the Food Court at Reber-Thomas. The new setup allows students with dietary restrictions to eat without worrying about cross-contamination.

“I have a lot of friends who have allergies or cannot eat gluten,” observes one student, Georgia Crandall. “Now when we come to the dining hall, we all can sit together and they’re able to have options without worrying about getting sick.”