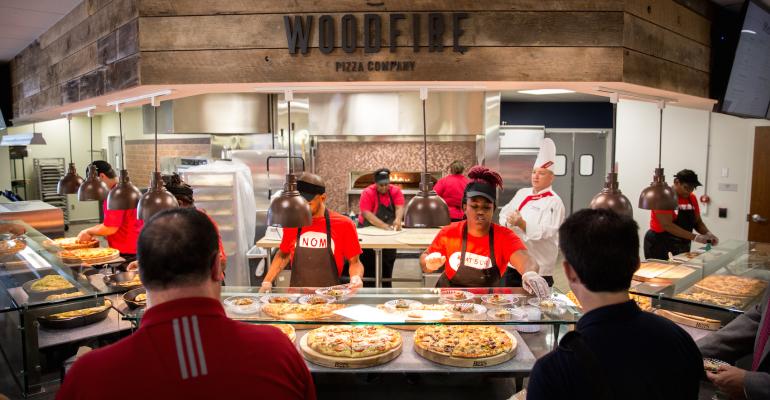 <p>Woodfire is one of two pizza concepts that debuted at Liberty University. It specializes in premium New York style pies by the slice while Hilltop Pizza offers whole pies for eat-in, take-out or delivery.</p>
News & Trends>Colleges & Universities

Hilltop Pizza, one of two new pizza concepts at the school, now offers eat-in, carry-out and delivery options each evening.

Pizza may be the national dish of College Nation, and students are not averse to taking the option of ordering delivery no matter how conveniently located on-campus pizza shops may be. That represents lost sales opportunities for campus dining programs.

At Liberty University in Lynchburg, Va., the campus dining services estimated that students were spending about a million dollars a year on pizza delivery from off-campus restaurants, so the department, which is managed by Sodexo, decided to do something to keep some of those dollars on campus.

The result is Hilltop Pizza, a new concept developed by Sodexo and piloted at Liberty, which functions as both a brick-and-mortar location where students can eat in the dining room or get carry-out, or order delivery at the counter or online. An app is in the works, says Ryan Wheeler, marketing manager for Sodexo at Liberty.

Also debuting this fall at Liberty is another pizza concept called Woodfire, also a Sodexo-developed exclusive for the campus, that is located in the new Montview Student Union. Woodfire, which doesn’t have a delivery option, menus upscale New York-style artisan pies baked in a wood-fired oven that are also available by the slice. Hilltop, by contrast, specializes in whole pies and more standard toppings.

“Woodfire has just blown up,” Wheeler says. “It is probably one of our top two busiest concepts right now.”

Meanwhile at Hilltop, the minimum order for delivery is $9, payable when the order is placed by debit or credit card or through the university’s Dining Dollars or Flames Cash accounts. The price of each order includes a $2 delivery charge with deliveries, which are carried by two gym carts equipped with hotboxes driven by adult staffers who for optimal security have gone through driving training courses designed for this concept.

Hilltop, open seven days a week from 5 p.m. to 11 p.m., is located in the Doc’s Diner complex on the school’s East Campus but delivery is available campus-wide.