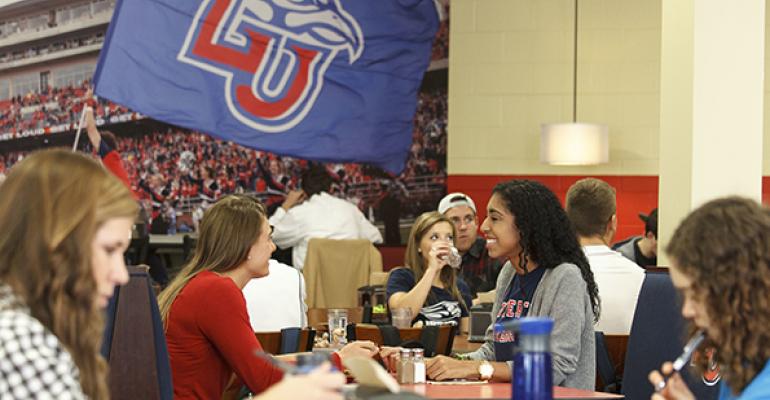 <p>Reber-Thomas Dining Hall serves as the main dining facility for Liberty University&rsquo;s 8,000-plus campus resident students, who get universal access as part of their meal plans.</p>
News & Trends>Colleges & Universities

Voluntary commuter meal plan sales for the 2015-2016 school year have already doubled the number posted all of last school year at Liberty University, the private Christian university located in Lynchburg, Va. And that number—almost 1,400 as opposed to around 700 last year—is sure to grow with well over half the academic year yet to go.

Few numbers are as indicative of the regard in which a campus dining program is held by students than the voluntary meal plan sales figure, which generally is purchased by upperclassmen living off campus.

At Liberty, the voluntary meal plan sales combine with a robust mandatory meal plan base generated by the 8,000-plus students living on campus to give the dining department a strong financial foundation.

And the department, managed by Sodexo, has made the most of it, aggressively upgrading dining facilities and adding new concepts in recent years.

“Our goal is to have something new for students every time they come back to campus,” says Louis Cambeletta, director of dining.

This year’s “something new” included three new retail concepts (plus an enhancement to a fourth one) and one addition to the Reber-Thomas residential dining center’s concept mix.

The new retail locations include a made-to-order salad concept called Farmers Field that utilizes locally grown product as much as possible, a branded Auntie Anne’s station in the library food court and a new food truck called Cravings. In addition, the library’s existing Pizza Hut station bulked up its menu with a new Wing Street component to complement its pizza offerings with varieties of chicken wings.

“We had burgers before but they were frozen,” Cambeletta explains. “Now, they’re fresh and made to order with a wide choice of hot and cold toppings that include guacamole, ham, different sauces of the day, sautéed onions, mushrooms and so forth. It’s a retail-style burger in residential dining. To put it in, we carved out space on our Flame grill station and added a machine that can prepare 24 burgers in 70 seconds.”

So what’s the deal with adding such an upscale new burger station? Was someone complaining? Not exactly, Cambeletta admits. It’s simply another step in making campus dining—especially residential dining—cool.

“One thing we got from student surveys is that they love new things,” he explains. “Well, it’s easy to bring new retail concepts to a campus, but to do something new inside a residential dining hall—where they will eat the majority of their meals—has much bigger impact. So we wanted to create something in Reber-Thomas that would be unique, that would be different, that it would be something that they couldn’t get anywhere else on campus.”

Reber-Thomas already had quite a menu selection as it boasts 17 food stations that offer everything from Mexican, Italian and rotating global to barbecue (with its own smoker that can turn out 650 pounds of smoked meat a day), Mongolian Grill, an all-day waffle and cereal bar and another station that rotates build-your-own menu platforms from waffles one day and yogurt parfaits the next to omelets or cupcakes on other days. There are even separate stations for those dealing with food allergies (the FM Best Concept winning Simple Servings) and those wishing to eat like and with athletes (Training Table).

Reber-Thomas, the school’s main residential dining outlet (there’s a smaller residential venue, Hill City Bistro, on another part of campus), had already been completely renovated and expanded only a year ago, concurrent with a change to a universal access approach in the meal plan that allows students unlimited trips (other than no more than once an hour) inside Reber-Thomas as well as 10 weekly meal equivalents at most retail locations around campus, that is, those concepts proprietary to either the Liberty campus or to Sodexo.

To help control costs and reduce waste, Sodexo instituted a portioning approach at all Reber-Thomas stations other than the few self-serve outlets. “We serve them smaller portion sizes than before, but of course if they want more they can always go back for more,” Cambeletta emphasizes. “It is all you care to eat. We just don’t want them taking more than they can eat and then throwing it away.”

The strategy seems to have been successful as not only waste has been reduced at Reber-Thomas but also food costs have come down.

The unlimited Freedom Dining meal plan is also available to commuters and staff (and several hundred have taken advantage, Cambeletta reports), along with block plans of various sizes (30, 60 or 90) that provide access to Reber-Thomas, Hill City Bistro and the proprietary retail outlets. All meal plans also include “Flames Cash” that gives users discounts at all campus dining locations, including commercial brands like Starbucks, Chick-fil-A and Dunkin Donuts (though at those the discount is 10 percent instead of the 15 percent at the proprietary locations).

Reber-Thomas is especially attractive to off-campus students not just because of its cornucopia of food concepts but because it sits in the heart of the campus’s academic sector, providing easy access. As a result, daily customer counts are massive, usually in the 10,000 to 12,000 range, Cambeletta says.

This is not to slight Liberty’s retail dining program, which has been bolstered by the newly opened concepts. In fact, thanks to the new meal plans and their retail bonus meal component, meal consumption patterns are now more widely dispersed around the campus than before.

Among the concepts new for 2015, Farmers Field, located in the Tilley Student Center, illustrates a strong commitment to sustainability, drawing as much as possible of its ingredients (about half in the early fall) not just from local growers but from Liberty’s own Campus Garden.

Auntie Anne’s joins Pizza Hut/Wing Street and French café concept Brioche Doree in a mini food court-style retail cluster called Tinney Café on the lower level of the Jerry Falwell Library, which also has a Starbucks near its entrance. The popular restaurant brand replaced an underperforming sushi concept and jolted daily sales numbers at that station from around $200 to $2,500, without cannibalizing the other food outlets in the building, Cambeletta says.

Meanwhile, the new mobile eatery Cravings sets up shop at various campus locations during the day to provide a dining alternative, but Cambeletta says its most successful times tend to be during home football games, when it serves as an extra concession stand near the student section, offering an exclusive menu of game day treats such as wings, seasoned waffle fries and pulled pork sandwiches.

The impact of the bonus meal component of the meal plans can be seen in transaction counts, especially in the Tilley Student Center, where stations that take the bonus meals significantly outperform those that don’t. Sodexo’s proprietary sandwich concept Sub Connection is the venue’s—and campus’s—highest volume retail site, serving an average of some 1,500 students a day. That’s three times as much as the much more familiar and nationally popular Chick-fil-A located nearby, which doesn’t accept bonus meal equivalences. Other high-performing stations in the Tilley Center include Wholly Habaneros, another Sodexo concept, and Bella Trattoria, which is being piloted at Liberty by the company—and quite successfully, drawing about the same daily customer counts as Chick-fil-A with a menu consisting mainly of Parmesan sandwiches and pastas, fresh salads and Tuscan bruschetta.

Cambeletta and his team are not resting on their laurels—remember, he wants to have something new every year for students to try. Plans currently on the drawing board include a new dining hall that will be located closer to the residence halls. The ground breaking is expected in 2017-2018. Currently underway is a new student center that will include six new retail dining outlets, a mix of proprietary and commercial brands. That is expected to open next fall, so something for returning students as well as the class of 2020 to look forward to.