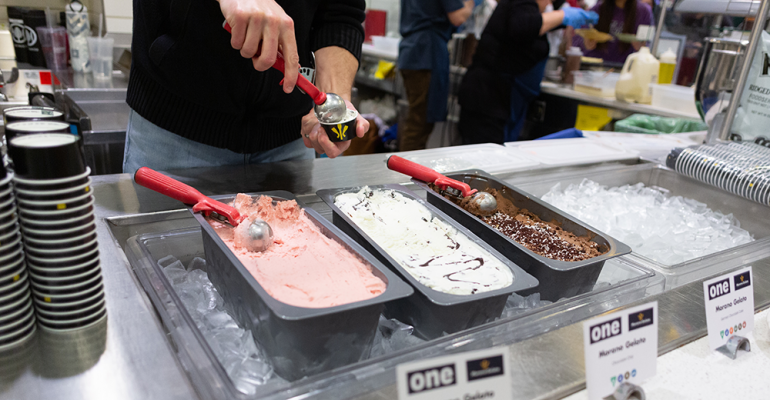 Local restaurants come together for secret ‘One’ event at Dartmouth

Sometimes “no comment” can actually be an effective marketing tool. Here’s how a unique, mysterious marketing push created a media frenzy and a much-talked-about event.

Dartmouth’s Class of 1953 Commons was dressed in gala gear for the recent One dinner. Hollywood-style search lights swirled overhead while green light reflected on the entrance, where a long line quickly formed to sample local eats from all over Hanover, N.H.

The event, the first ever, was named by Dartmouth Director of Dining Jon Plodzik, with “One” meaning one signature dish from 10 different local spots, a fact not revealed until the day of the event.

Diners received a menu at the entrance, and then plotted their course to try as much as possible. About 2,300 people attended, compared to the usual Monday-night count of 1,425 diners, making it “truly one of our greatest events,” Plodzik says.

The idea for One came about last year during a weekly marketing meeting in which Plodzik and the Dartmouth dining team were discussing how to promote some local partners.

“That got me thinking about an event I had done many years ago on a smaller scale at UNH [University of New Hampshire, where Plodzik was previously director],” he says. “We invited all of the local restaurants—that students could walk to—to join us for a meal one night.”

In addition, seeing some downtown Hanover restaurants struggle and close since he’s been at Dartmouth makes Plodzik sad, he says.

“Including the local restaurants sends the message that Dartmouth Dining is part of the local community too, and that we are supportive of their business,” he says. “We hope to create working relationships that are good for both of us. Having a student dine downtown now and then helps those businesses survive and may lessen our expenses too. In a way, One gives local businesses free marketing to a captured audience of truly potential patrons that any business would love to have.”

This all developed into the idea of each restaurant doing one signature dish, “at one place for one night…one dinner,” Plodzik says. “And the concept for One was born.

Plodzik and Dartmouth Dietitian Beth Rosenberger went door to door to each restaurant, telling them about One and why they should participate. “I felt like a was a politician on a campaign,” Plodzik jokes, “but we got some great interest from some and kept visiting those that seemed unsure or hadn’t committed yet.”

Dartmouth Dining covered each restaurant’s food cost for the item they served, “so I’m not sure why everyone wouldn’t have wanted to participate, but I’m pretty sure they will want to, now that it was such a success.”

Marketing leading up to the event worked so well because “Dartmouth’s community is smaller, tighter and more engaged with our program [than UNH],” Plodzik says. This set the stage for the art of building excitement by being purposely vague. 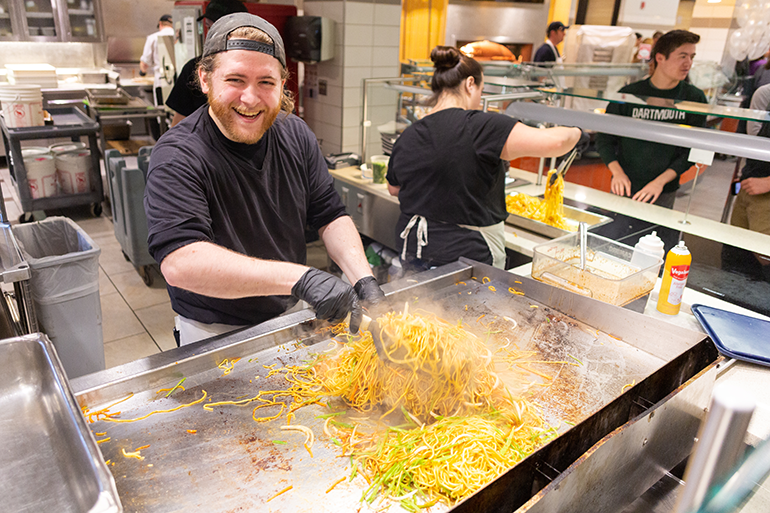 As the event got closer, details remained a secret and the Dartmouth community began to wonder what all this “One” talk was all about, following Dartmouth dining’s teasers on social media, table tents and even T-shirts, with just the word “One” on a black background with the date and location of the event.

“Each week, we added a little more. Everyone wore the T-shirts but didn’t know the details!” Plodzik says. “Students really got into trying to figure out what this One event was all about. They texted in our feedback service, asked everyone who was wearing a shirt what it was.”

Rumors were flying and soon the young reporters at the Dartmouth student newspaper received an anonymous tip about the event and began contacting participating restaurants, which created a bit of a wild goose chase, proving the point that sometimes all publicity is good publicity.

“Some restaurants refused to comment since they knew it was supposed to be a surprise,” Plodzik says, which led to even more speculation (and buzz, incidentally.) “We heard rumors of a new meal plan being launched, that there would be only one chair for everyone to sit at, that even many will enter for dinner but only one would be able to leave and my favorite, that we would only be serving one item for dinner that night—how off was that?!”

The confusion/buzz did backfire a tiny bit, with one restaurant actually understanding they were to bring just one item to the event. “They were a little off, but we all had a good laugh,” Plodzik quips.

The marketing efforts were finally capped off with text alerts of the event. All in all, everything went so well, Plodzik hopes to do it again next year, he says.

Local restaurateurs each set up at a different station, offering a true taste of the town: