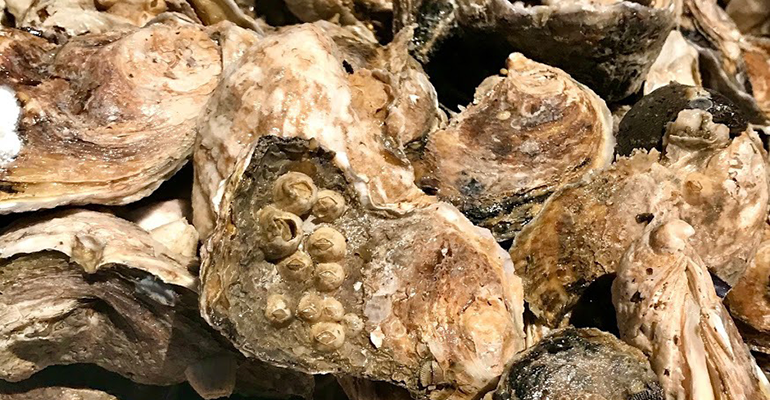 The shells are reseeded with juvenile oysters and returned to the Chesapeake Bay in what a Loyola official calls "a great full-circle program."
News & Trends>Colleges & Universities

Oysters are an important component for the Chesapeake Bay ecosystem on several levels, from filtering water to bolstering the local economy. Recycling the shells is part of the big picture.

An opportunity to test drive oyster shell recycling presented itself at the annual Bull and Oyster Roast, a longstanding alumni tradition at Loyola University Maryland, started 70 years ago. This year, the event was rescheduled to coincide with Loyola’s homecoming weekend. Dueling pianos, a jazz lounge and plenty of local eats from the catering crew welcomed alums back to campus.

In case you’re wondering, the “bull” part of the roast refers to a carved beef steamship from nearby Roseda Farms. Other menu items are a coastal selection perfect for the cooler temps of fall: Maryland crab soup, carved turkey, Italian sausage, three-cheese macaroni, mashed potatoes, housemade desserts and, of course, the oyster station. 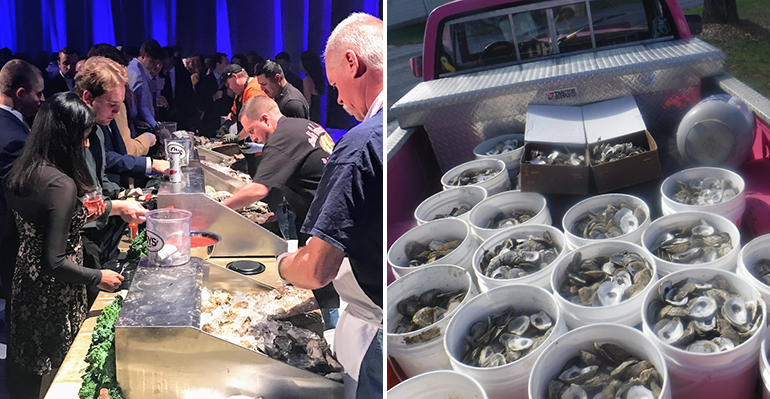 From one fall event at Loyola University Maryland, 12 buckets of oysters totaling 406 pounds were given a second life, part of a recycling program with a local shucker. (Right photo courtesy of Bay B Beautiful)

Oysters were sourced locally from Bob’s Seafood Co., which also supplies local shuckers to work the event (getting those little guys open for a crowd can require the fast-moving hands of oyster pros). For the event, the oysters came from the Honga River, an estuary on the eastern side of the Chesapeake Bay in Maryland.

The catering team and shuckers worked with Bay B Beautiful, an organization that focuses on preservation of the Chesapeake Bay, including hands-on efforts to collect oyster shells for recycling in Harford and Baltimore counties.

With oyster shell receptacles set up around the event, attendees, catering staff and shuckers all knew where to throw the “empties” after they were slurped.

“It’s a great full-circle program,” says Lindsay Winn, Loyola marketing and wellness manager. “The collected shells are transported to Horn Point Laboratory Oyster Hatchery in Cambridge, Md., which is part of the University of Maryland Center for Environmental Science.”

There, the shells are reseeded with juvenile oysters known as spat, which can have as many as 10 juvenile oysters to a shell. Once conditions are right, they are placed back into the Chesapeake Bay, where they do a lot of good for the ecosystem.

“Oysters are considered the vacuum cleaners of the Chesapeake Bay,” according to the hatchery’s website. “They filter the water removing organic and inorganic particles from the water column, resulting in cleaner water which positively impacts other species.”

In addition, oyster shells create a base with nooks and crannies that provides habitat for many ocean creatures like barnacles, mussels and anemones. Basically, oyster reefs provide shelter and are a vital part of the dynamic environment of healthy waterways.

As for Loyola, Winn says that moving forward, whenever oysters are offered, the shells will also be recycled. For this particular event, 406 pounds of oysters were given a second life.