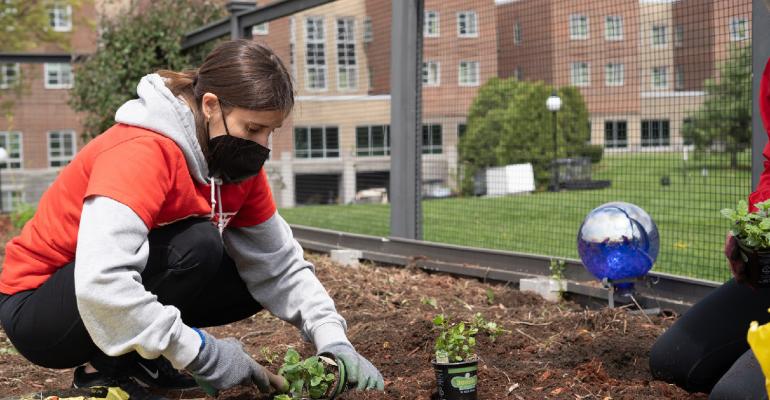 Start Slideshow ›
Special event at Marist College featured dishes made with select fresh produce from the Marist Garden, while extra portions were set aside to donate to a local nonprofit.

On Tuesday, September 7th, Marist College Dining Services hosted an event called A Marist Garden Party at its Murray Student Center Dining Hall, where it served dishes made with select fresh produce from the campus Marist Garden. Not only were extra portions of the meals made and set aside to donate to a local nonprofit but, corresponding with the event, produce from the Marist Community Garden was donated to the local community via the FeedHV non-profit organization.

This is not the first time the Marist Garden has donated fresh produce to the community, as at least half of all food grown in the garden must be given either to Marist students or the surrounding Poughkeepsie, N.Y. community. This summer, for example, over 25 lbs. of fresh produce such as tomatoes, radishes, Swiss chard, lettuce, carrots, squash, basil, rosemary, arugula and garlic went to Dutchess Outreach and other food pantry organizations.

The Garden has 13 beds, one of which is managed by Marist Dining Services, and served as the main bed utilized for the Garden Party. It produced ingredients for Heirloom tomato pizzettes with fresh basil, wild blackberry cobblers with fresh cream and lemon mint sweet tea.

The Marist Garden was started in 2018 by two Marist students, environmental science majors Alec Lee and Alexis Kovlakas, for their Honors thesis project and continues to generate strong student involvement.