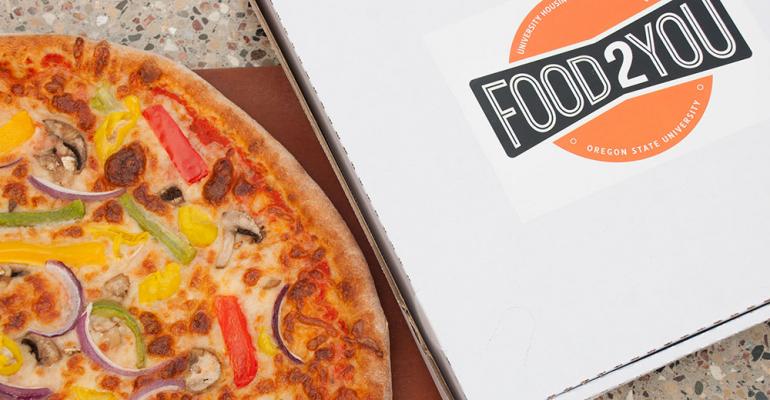 Oregon State University
The Food2You late-night delivery program at Oregon State allows on-campus residents to order online from a selection of pizza, pasta, desserts and beverages. The order can be delivered directly to a residence hall room and charged to their dining plan.
News & Trends>Colleges & Universities

Service generates up to 300 transactions a night.

Delivery services are a fast-growing phenomenon in a variety of onsite environments, but especially in colleges with large residential populations that represent a ready and willing market. One of the most successful such programs is Food2You at Oregon State University (OSU), which has now been in place for almost three years and generates up to 300 transactions a night.

Food2You operates between 9 p.m. and 12 a.m. daily and offers a menu of popular late-night fare such as pizza, pasta, salads, desserts and various beverages. There is minimum of $5 per order but the check average is actually running almost three times that, at between $12 and $15.

OSU is a fertile ground for such a service, with 15 on-campus residence halls housing some 5,000 students. Orders are made on OSU’s online portal and delivered directly to dorm room doors within a 45- to 75-minute window. Payment is either through the meal plan or with OSU’s Orange Cash declining balance accounts. It doesn’t accept either cash or commercial credit or debit cards, and there is no tipping.

Among the most popular menu items ordered through Food2You are Otis Spunkmeyer branded chocolate chip cookies, which come in a 2.5-ounce pack of four for $6.75.

“We run through those pretty fast,” laughs John Moore, food service coordinator for University Housing & Dining Services (UHDS) at the Marketplace West facility from which the delivery service is run. Moore oversees a staff of students who produce and deliver the late-night orders.

As might be expected on a college campus, another popular choice is the 12- and 16-inch pizzas, which use scratch-made dough and sauce utilizing locally sourced ingredients where possible. The dough is a 60/40 blend of white and whole wheat flours. Topping options include pepperoni, sausage pepperoni, vegan or regular cheese and veggies like red onion, bell pepper, mushrooms and pepperoncinis. The signature pie is the Beaver Cheese pizza, which uses smoked mozzarella and Swiss cheeses produced by OSU’s food science program on campus.

The pizzas help boost the check average as they are sold as whole pies rather than by the slice as at the school’s retail dining locations.

The pasta selections are composed of 8 ounces of pasta and 4 ounces of sauce, including house-made Pomodoro or Alfredo, with either Italian seasoned chicken or meatballs available for an extra charge. For gluten-free customers, there’s a red lentil pasta selection.

There is generally a rush right at the start of the evening’s shift, Moore observes.

Weekdays also tend to be busier as students are more apt to be in their rooms, perhaps with friends over, Moore adds.

As deliveries are made directly to dorm rooms by OSU student workers authorized to enter the premises, Food2You has an advantage over other delivery services that operate from off-campus and hence don’t have permission to enter controlled access buildings like dorms.

Over time, Food2You has evolved an efficient mode of operation. It has access to four campus vehicles, which take two delivery persons out at a time, drop them off near their delivery sites, then return to Marketplace West to pick up another round of orders. They then return to the drop-off location where they rendezvous with the delivery persons, who then take the new orders to their destinations, cutting out the time it would take delivery people to retrieve new orders from the production kitchen.

The campus delivery service was conceived at a time before the current meal delivery trend heated up, so OSU can be considered a front-runner in the market.

“The idea [for a campus delivery service] originally came from our leadership team in response to student interest in a late-night dining option,” Moore explains. It launched in September of 2015 with a minimal menu emphasizing pizza and salads, but it grew fairly quickly. Pasta and dessert selections were added later as overnight counts expanded from less than a hundred to almost three times that, and with little overt promotion.

“We mostly rely on word of mouth,” Moore says, “but our demand is still growing faster than we can hire and train people. They see students making the deliveries and because it’s such a great service students talk about it quite a bit.”