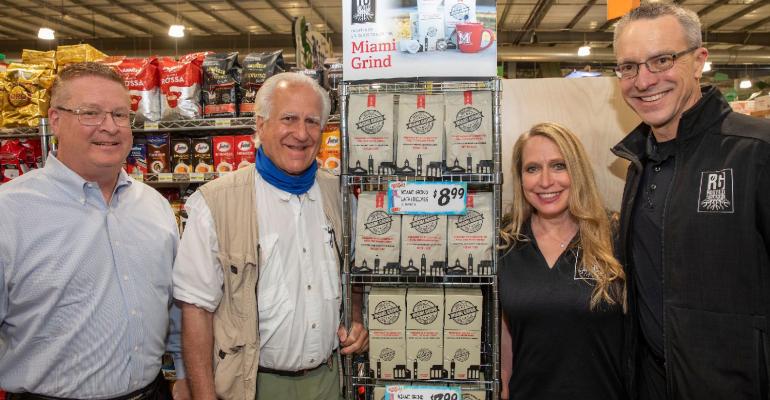 Proprietary Miami Grind blend created in partnership with a local, alumni-owned roaster Rooted Grounds Coffee is now available in retail form at a regional retailer that is also alumni-owned.

Miami University (MU) Dining Services had partnered with locally based—and MU alumni owned—Rooted Grounds Coffee back in 2015 to create the university’s own Miami Grind coffee blend, which has since been served across campus in dining halls, retail cafés, catering operations and concessions. In the fall of 2019, the Miami Grind program branched into K-Cups and 12-oz. packages—with their design created by MU students—that were then sold in campus retail and market locations.

This spring, distribution of the retail products was extended further, to off-campus customers through a partnership with retail chain Jungle Jim’s International Market, which is also owned by an MU alum. Meanwhile, Miami Grind is now the only coffee served at most locations on the MU campus, with almost 17,000 lbs. used as of the end of the spring semester, which translates to 58,853 gallons of coffee, according to Geno Svec, executive director of campus services and chief hospitality officer.

“Anywhere that I serve coffee in any of my businesses is going to be Miami Grind, outside of the two Starbucks locations that we have,” he says. “Everybody loves it. There have been no complaints when we switch from Starbucks Proudly Brew to Miami Grind. Actually, we’ve had compliments about it.”

Miami Grind is a dark roast made with a blend of two varieties of beans, Svec explains.

“It was a project put on with the students, who worked with us through the whole process,” he notes.

The alliance with Jungle Jim’s adds another layer of connectivity with the broader alumni and surrounding communities. The retailer currently operates two locations in the area that total more than 500,000 square feet and stock products from over 70 countries, including fresh and packaged products, natural foods/supplements, specialty products and alcoholic beverages.

Meanwhile, this past school year, MU followed a hybrid schedule protocol of in-person and online classes with about 4,000 students on campus for both semesters, which is about half of the normal campus population. Everything is served in disposable containers with no self-service and about 80% of the meals are takeout, Svec estimates, as seating capacity in dining venues is only about a third of normal

“We are planning fall to be normal,” Svec adds, fingers undoubtedly crossed, “and we’re hoping we’ll be back to 100% capacity and chugging along like we were [previously].” He says he is still awaiting guidance from the local health department on exactly how dining operation could be conducted when fall classes begin. Ohio loosened most pandemic-related restrictions, including mask requirements, as of June 2.