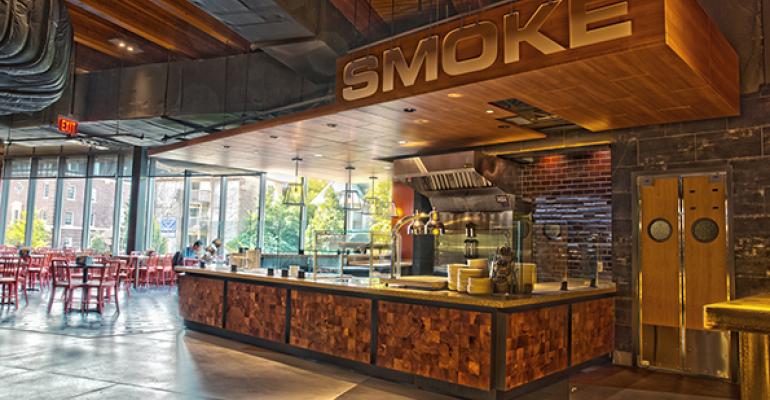 The new dining hall at South Quad features 10 unique micro-restaurants and is just the latest change in Ann Arbor.

Steve Mangan stepped into his new role as Director of Michigan Dining seven months ago in the middle of what he calls a “transformative era.” The former director at Northwestern isn’t exaggerating. In fact, it might be an understatement. Take note of what’s new on the Ann Arbor campus:

• Five renovated dining halls in the last six years.
• An increased focus on culinary expertise.
• The creation of a new dining department after the merging of the residential dining and the retail and catering operations.
• New required residential plans that provide students unlimited access to all dining halls.

“We’ve listened to our students and are really trying to meet their needs for food, nutrition, wellness and better spaces to meet and eat and to continue their study and social interactions,” says Mangan.

The latest gem on campus is the new dining hall on the South Quad, part of a $60 million renovation project that reshaped both dorm living and dining. The new hall replaces three smaller ones and features approximately 950 seats and 10 micro-restaurants. The old dining halls have become gathering places for students to study and socialize.

South Quad Dining
Olive Branch, offers Mediterranean fare, homemade pasta, hummus and a stone pizza oven, while Sabroso features a fresh tortilla maker and Latin cuisine. Toast offers breakfast all day, including made-to-order omelets that Executive Chef Frank Turchan says have taken off and become one of the most popular meals in the new hall.

Signature is the chefs’ showcase area, with a demonstration kitchen and a private dining room behind it, that features daily chef-inspired specials. Smoke is the traditional barbecue joint, complete with a massive smoker cooking up to 1,000 pounds of meat a day. Whole chickens, brisket and all kinds of pork are cooked overnight low and slow.

Wildfire was inspired by students and features a grill station offering burgers, grilled cheese and other sandwiches and sides. 24 Carrots provides vegan and vegetarian fare, while Two Oceans offers Asian inspired cuisines. It opened featuring hand-rolled sushi, but those offerings became too popular and too labor intensive to continue. Sushi will return once Turchan gets his new sushi-rolling machine up and running. He first saw it at the National Restaurant Association Show in Chicago earlier this year and hopes it can provide the quality and quantity he needs.

Madison Street Deli offers sandwiches and salads made to order and Finale offers a sweet finish with desserts.

There is also a bread station, salad bar, beverage area, gluten-free pantry and several seating areas spread around the different micro-restaurants. The design and décor also varies throughout the hall, from bamboo-style flooring at Two Oceans to more seats, TVs and a sports theme around the more casual Wildfire and Smoke.

“If you’re a student on a board plan, you’re going to have a favorite restaurant and might get bored,” says Christine Siegel, senior associate director, Michigan Dining. “The idea here is to create a sense of variety, so every day you can choose from 10 different restaurants.”

Peter Logan, director of marketing and communications for Student Life Auxiliaries, says this is the latest in a decade-long renaissance to make the dining experience more dynamic. Of the university’s seven dining halls, this is the fifth to be renovated since 2008. Mangan was brought in to lead Michigan Dining, a new department that connects and combines residential dining and the retail and catering operations.

“Another part of this reawakening is the increased focus on culinary expertise,” says Mangan, adding that additional chefs have been brought in to provide more authentic preparations.

Not only has the food changed, but so has the serving style.

“About two and a half years ago we started using smaller plates, more restaurant style,” says Turchan, who’s been at Michigan for seven years, the last three as executive chef. “We’re competing more with Main Street (restaurants) and today’s students are more educated and want higher quality food.”

The shift to smaller plates was timed ahead of the new unlimited meal plans debuting this year. “Rather than gorging on a couple big meals, students can eat a number of small meals with these small plate concepts,” says Siegel.

The numbers, so far, bear that out. The dining hall has been serving 5,000 to 6,000 meals a day, with approximately 1,000 for breakfast, 2,000 for lunch and 2,500 for dinner. Although it’s too early to tell, Turchan says that although the counts are much higher, the food costs may not be because of the smaller serving sizes.

From small plates all the way up to an entire quad, Michigan Dining really is changing.